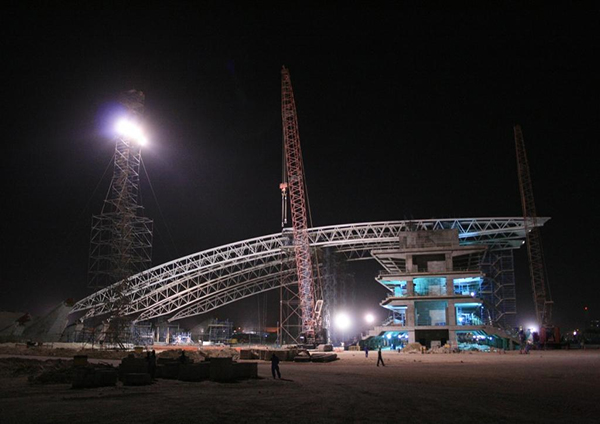 When I was a child, most afternoons our kitchen was a buzz with tradespeople, plumbers and drainers drinking coffee and eating Madeira cake. My mother and father ran a successful plumbing business from our home in Sydney’s north western suburbs. Despite the familiarity, I never considered a career in construction until after I had represented Australia in judo at the 1996 Olympic Games. My first degree was a Bachelor of Arts in politics and Indonesian language and this gave me a start in public relations. However training for the Sydney Olympics, I was concerned about my financial wellbeing after my Olympic career; judo is not a lucrative sport. At 25, I enrolled in a Bachelor of Building Construction Management at the UNSW Built Environment and I found myself a job with a large construction contractor. This was the beginning of my construction career.

Natalie Galea when she was working in the Kingdom of Saudi Arabia. Photo: Author's own.

On my first job as a cadet, I remember the surprised look on the face of the Project Director who came to collect me from head office. “They didn’t tell me I was getting a girl,” he said. As a 25 year old woman, I was eager to fit in and be included yet I now realise that this was the start of having my gender continually pointed out to me. These reminders came often, said in passing with little thought but when you are routinely the only woman in the room these reminders act as small, subtle paper cut reminders marking your difference and lack of legitimacy.

Most of my career has been spent working on building projects for large construction contractors. I worked hard and was ambitious but to gain career opportunities and promotion I felt I needed to move companies; a practice common to women construction professionals according to research. I also moved cities. From Sydney I moved to Brisbane and then to Qatar, the home of the 2022 World Cup. I remember flying into Qatar and seeing the barren desert below and wondering what I had got myself into. I was single woman traveling solo. Over the next five years I worked in the Middle East and North Africa. I built an equestrian centre in Doha, project managed the construction of a military base in Dubai and led mining infrastructure bids in Saudi Arabia and Mauritania. I enjoyed working with other nationalities and quickly realised how privileged I was to be an Australia. For the first time in my career, I was sponsored by a senior male leader who provided me with an abundance of opportunities until his death in January 2012. Prior to his sponsorship, opportunities to develop key skills necessary for promotion in construction had largely eluded me.  I feel my gender played a part in this but it is hard to pinpoint.

At the end of 2012, I took a sabbatical from construction and returned to Sydney and enrolled in the PhD program back at UNSW Built Environment. My PhD seeks to understand what taken-for-granted practices that maintain men’s unyielding dominance in the construction sector and whether these same practices prevent women’s appointment, promotion and retention. I sought to understand this question for three reasons: to make sense of my own career in construction, to understand why I had so few women peers on construction sites and in senior operational roles in construction companies and to determine what needs to change for the sector to move beyond its status as “the most male dominated sector” in Australia.

In the last year, I have had the opportunity to shadow and interview construction professionals, women and men, on construction sites across Australia. I have learnt a lot from them in relation to how construction work is done and how construction careers are formed and developed. This exposure of different construction professionals has allowed me to unpick construction practices that often appear to be gender neutral but have different implications for women and men. My research has found that there are taken-for-granted practices and norms in construction that have long advantaged codes of masculinity and men, at the expense of women and broader gender diversity. I do, however, acknowledge that men’s advantage has not been universal nor do men feel they have been individually privileged. Indeed, my research highlights that the sectors present work practices of total availability and presenteeism continues to have detrimental effects on men’s (as well as women’s) health and wellbeing. Indeed, if the industry wants to change its present masculine persona it must change its work practices – how we resource our projects, program our work and structure our projects. These acts, while difficult, will have the greatest impact on women and men in construction. They will also help to attract and keep the best and brightest talent to our industry, something that has eluded us for decades.

I am in awe of the women who remain in construction and continue to trail blaze but my research finds that we are still far from reaching an equitable landscape. One thing that must change immediately is the industries tolerance for practices that exclude women. In 2016, it is unacceptable to have porn and gendered language in the workplace but while I shadowed construction professionals I observed pictures of breasts stuck on hardhats, penis’ drawn on the walls and G-strings issued to women construction graduates. Leading construction companies are actively trying to transform the industry. In addition to investing in research, they are recruiting more women graduates and rebalancing the gender pay gap. Unfortunately, my research has found that processes of recruitment and promotion remain informal and gendered. The sector operates as an economy of favours. Sadly, with the heightened focused on gender diversity, there is a growing resistance by some men who perceive these initiatives to be giving women an unfair advantage.
I am on track to finish my PhD in early 2017 and with this knowledge, I hope to return to the construction sector and develop “construction specific” responses to the intransigent gender equity problem.  The business case for gender diversity is clear – if we want to build the best cities we must hire the best talent. For too long, the construction sector has been fishing from half the pond. Women have skills and expertise to contribute to the sector and we need to include them.

Interested in a career in construction? Check out the degree Natalie did here.