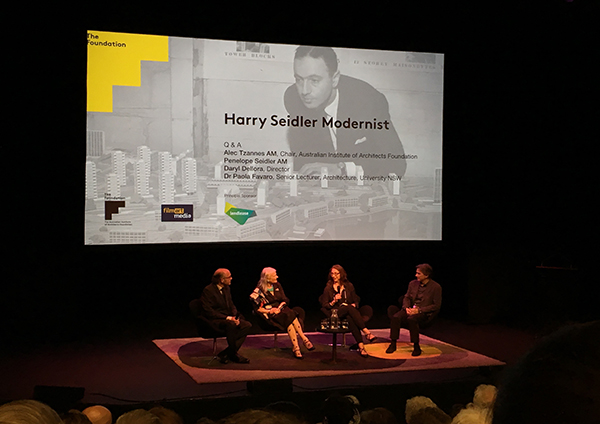 The film, a very beautiful and insightful reflection on Sydney architect Harry Seidler (1923-2006), was produced by Sue Maslin (The Dressmaker) and presented by the Australian Institute of Architects Foundation.

Many of Seidler’s works are filmed and presented by Dellora’s skilful film direction and filming process from his early houses to his urban projects located in Sydney, nationally and internationally.

The film, however, is unquestionably enhanced by the fascinating and at time humorous personality of Harry’s wife and architect Penelope Seidler, director of their firm Harry Seidler Associates and Architecture Foundation Member.

The screening was followed by a Q&A discussion with the film’s director Daryl Dellora (The Edge of The Possible: Jorn Utzon and the Sydney Opera House), Penelope Seidler,  Dr. Paola Favaro and moderated by the Foundation’s Chair, Emeritus Professor Alec Tzannes AM.

A quite attentive and engaged audience of professionals, clients, friends, architecture students and general public asked a number of interesting and provoking questions to all the members of the panel.