Home aircon use set to explode by 750 per cent 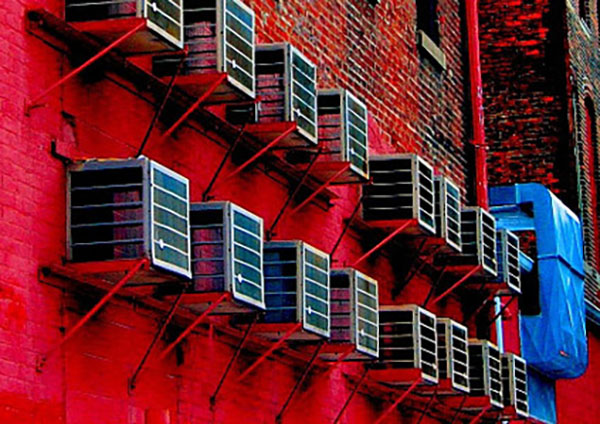 This could be the future if we’re not careful, according to new research from UNSW built environment expert Professor Mattheos Santamouris. It finds that increased temperatures, population and economic growth, and a trend of smaller families living in larger homes could see worldwide cooling energy consumption rise by 750 per cent by 2050.

Professor Santamouris will present his research findings, published in the journal Energy and Buildings, at UNSW’s Utzon Lecture on Wednesday night, which will also discuss the global move to zero emissions buildings.

“In 2010, the world’s cooling consumption in the residential sector represented almost 4.4 per cent of the total heating and cooling needs of buildings, but this is expected to increase to 35 per cent of total energy consumption in 2050 and 62 per cent in 2100,” Professor Santamouris said.

“Although the energy efficiency of airconditioners is expected to improve by 20 per cent and the average performance of buildings by 30 per cent, energy improvements can’t counterbalance the tremendous impact of climate change and the increased population on airconditioning demand.”

Current trends in house size only exacerbate the problem, with average space per person in residential buildings expected to grow to 37 square metres, compared with today’s 24 sq m. This is mostly due to an increase in the number of smaller families living in larger households.

First, the research proposes increasing building standards, so they can reduce thermal loss and protect against ambient heat.

Next is the improvement of mechanical airconditioners and the further investigation of alternative cooling technologies. Solar cooling could be a prime candidate here – powered by the sun’s heat, with hotter temperatures leading to more efficient operation, which would help reduce peak loads.

See Solar cooling heats up in Australia and Is solar heating and cooling the next big thing?

Commercial solar cooling is already being trialled in Australia, with CSIRO testing a system on Stockland’s Wendouree Shopping Centre in Ballarat.

Finally, Professor Santamouris says it is critical to both decrease greenhouse gas emissions and protect against the urban heat island effect.

“In the future, the focus will need to be on reducing indoor temperatures, providing comfort and protecting the vulnerable population,” he said. “It is evident that significant technological, policy and social initiatives are immediately needed to face the upcoming cooling challenges and protect our future.”

This article was originally published on thefifthestate.com.au on the 28th September 2015.