A Galah to help map the history of the Milky Way

A huge galactic archaeology project called Galah is catching starlight to paint a picture of the galaxy's past, present and future, write Jonti Horner, Jonathan P. Marshall and Sarah Martell. 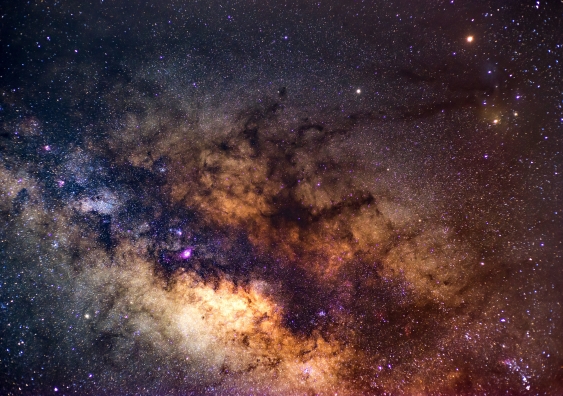 OPINION: Our galaxy, the Milky Way, contains at least 100 billion stars. Over the centuries, astronomers have scoured the skies, developing a thorough understanding of the lives of those stars, from their formation in vast nebulae to their fiery and spectacular deaths.

But how has our galaxy changed over time? Where did the stars we see today form, and which of them are siblings, formed together from the same cloud of material?

To answer these questions we need to perform Galactic archaeology. To do this, an ambitious Australian-led observing survey, called Galah, is undertaking the immense task of capturing millions of rainbows to disentangle our galaxy’s story.

Birds of a feather

When we break the light from a star into its component colours, the spectrum is laced with dark lines. These are the telltale fingerprints of the various atomic and molecular species present in the star’s outer layers.

The Fraunhofer lines - absorption lines in the sun’s spectrum that signpost the chemical composition of its outer atmosphere.Wikimedia/nl:Gebruiker:MaureenV/Phrood/Saperaud

By studying those lines we can learn a great deal about the star, such as how fast it spins, its temperature, and what elements it is made of. We can even use them to study stellar magnetic fields.

In essence, stars turn hydrogen and helium into heavier elements. When they die, they return that material to the galaxy, to be incorporated in the next generation of stars.

Most stars form in clusters, groups of hundreds to millions of stars that form at the same time in a vast nebula. Each nebula will have a unique composition, seeded by the death throes of the previous generation of stars in the distant past.

We also know that different types of stars return different elements to the galaxy at the end of their lifetimes. Because of this, astronomers can use the elemental patterns in present-day stars to explore what kinds of stars were in our galaxy in the past.

When a star like the Sun comes to the end of its life, it blows off its outer layers to form a planetary nebula – ejecting gas that will form the next generation of stars. The Helix nebula (pictured) is one of the finest examples in the night sky. NASA, ESA, and C R O'Dell (Vanderbilt University)

On timescales of millions of years, stars escape from the clusters in which they formed and migrate around the disk of the galaxy.

If we can use spectra to measure the compositions of many stars, we should be able to identify those that are made of the same stuff. The common origins of widely scattered stars is thus revealed by their matching compositions.

That brings us to Galah.

Hatching the idea for Galah

Galactic archaeology with HERMES (Galah) is a massive observational project using the 3.9-metre Anglo-Australian Telescope at Siding Spring Observatory. Since its start, in late 2013, the survey has collected more than 250,000 spectra, and that number grows every month.

To make such a large project possible, Galah uses robots to position fibre optic cables to catch starlight. These allow the Galah team to observe around 350 stars simultaneously in a region of sky four times the diameter of the full Moon.

After about an hour staring at one group of stars, Galah moves on, scanning field after field to build its catalogue of stellar spectra. When the project is complete, more than a million rainbows will be caught, each in exquisite detail.

The past few years have seen a worldwide boom in galactic archaeology. Several survey projects are going on around the globe, each filling a unique niche, and even larger projects are planned for the future.

While each of these surveys has a particular goal, when brought together they form a scientific superset that is greater than the sum of its parts.

The APOGEE survey studies red giant stars throughout the Milky Way using the 3.5-metre Sloan telescope in the United States.

Because it observes at infrared wavelengths, it is the only large survey that can peer through the dust that pervades our galaxy. This allows APOGEE to collect data on stars across the entire galaxy.

The disk of our galaxy, which contains the great majority of stars, is surrounded by a roughly spherical halo which consists of ancient stars. The halo hosts the mysterious globular clusters – spherical swarms of millions of tightly packed stars.

The Gaia-ESO Survey targets all these populations and more, using two different visible-light instruments at the 8-metre Very Large Telescope in Chile.

Galah, by contrast, focuses mainly our galaxy’s disk, where the great bulk of its stars reside. By obtaining such a huge sample of stellar spectra, Galah is the perfect complement to these two more focused surveys, providing the context in which their results can be understood.

Flying to the future with Gaia

While Galah and its fellow archaeological surveys have been farming the night sky, the Gaiaspacecraft has been busy pulling together a different, but complementary, data set.

Launched in 2013 on an initial five-year mission, Gaia is continually scouring the sky, repeatedly observing more than a billion stars, measuring their positions with unprecedented precision.

The motion of Barnard’s star, one of the sun’s nearest neighbours, against background stars over a 20 year period. Steve Quirk

By observing the same star several times, Gaia can determine how it moves across the sky, giving us an incredibly precise measurement of the star’s distance from Earth. Gaia also reveals the kinematics of the stars – how they move with respect to one another through our galaxy.

Even on its own, Gaia’s data will be an incredible resource. But when combined with data obtained by Galah and its siblings, it becomes far more powerful. Gaia will provide the distance to, and the precise motion of, a huge number of stars that will also have been surveyed by Galah.

The first public release of Gaia data earlier this year included precise sky positions and brightnesses for more than a billion stars and quasars. More importantly for our work, it also included the distances and space motions for 2 million stars that had been targeted by previous space missions.

To coordinate with Gaia, Galah also made a subset of its data publicly available, including data for 9,860 stars. Of these, 7,894 are in the special subset released by the Gaia team, and hence have precisely known distances.

Combining these data sets will allow the Galah team to investigate not just which stars formed together, but to examine whether they still follow similar paths around the galaxy.

As the Gaia mission continues, it will provide precise distances and space motions for every single star in the Galah catalogue. By piecing Gaia’s data together with our own, we will paint a far more detailed picture of our galaxy’s past, present and future than has ever been seen before.

Sarah Martell is a Senior lecturer in the School of Physics , UNSW.

This opinion piece was first published in The Conversation and can be republished for free, online or in print, under Creative Commons licence. See the republishing guidelines.