The scholarship, which offers a full-tuition place on the AGSM MBA (full-time) was unveiled in 2016 in honour of late Special Forces soldier and AGSM student, Matt Kappler. 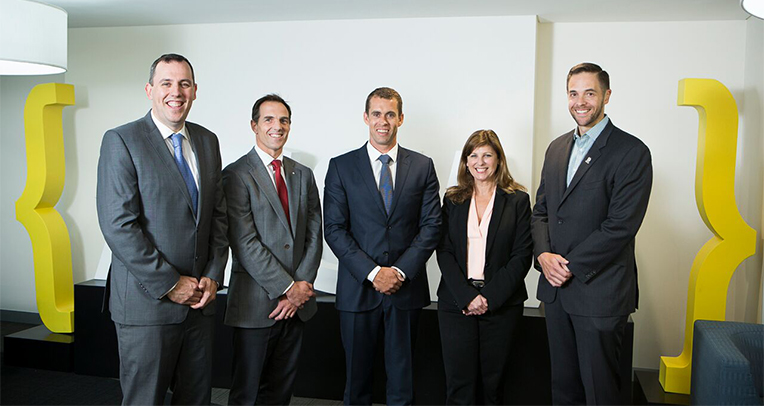 AGSM this week awarded the inaugural AGSM Military Scholarship to Richard Williams, a long-serving member of the Australian Army.

The scholarship, which offers a full-tuition place on the AGSM MBA (full-time) was unveiled in 2016 in honour of late Special Forces soldier and AGSM student, Matt Kappler, and supports a veteran or current serving member of the Australian Defence Forces in their transition from military to civilian life.

The inaugural winner, Richard Williams, joined the military as an officer in the army upon leaving school, completed an undergraduate degree in economics with the Australian Defence Force Academy followed by leadership training at Duntroon, after which he graduated as a Lieutenant. Williams went on to have a successful leadership career within the Australian Army spanning more than fifteen years, including several international tours and an exchange working with the British military in 2013-14. He is now looking to make the transition to business leadership in order to dedicate more time to his young family.

Of the scholarship opportunity, Williams says “I am humbled by receiving the scholarship, and really excited about the opportunity to learn. While I know the leadership skills I developed in the military will be transferable, the AGSM MBA will give me the opportunity to translate these into a business environment, as well as the time to review and reflect on my career to decide where I want to go next.”

“Going into the military as a school-leaver means that I haven’t had experience in the corporate world, and the AGSM scholarship has provided me with an invaluable opportunity to make the most of my military training and provided me with direction for my transition.”

AGSM has a long history of developing veterans into successful business leaders and entrepreneurs and many of these graduates will act as mentors to the scholarship winners. AGSM Academic Director, Professor Clinton Free says these graduates make up some of AGSM’s most successful alumni. “Our MBA graduates are diverse and we have many military leaders among them who have gone on to led organisations, create social enterprises or start their own ventures. We are proud to have the opportunity to formalise our relationship with the military through this scholarship.”

2013 AGSM MBA graduates, Phil Hayes-St Clair and Peter Winnall have championed the scholarship from its inception. Both joined the AGSM Full-Time program to help them take their military skills on to the business playing field, and have built successful entrepreneurial ventures – something neither was anticipating on commencing their studies.

Hayes-St Clair, CEO of tech company, AirShr, says that supporting our military through the transition is imperative to ensure that our veterans and business community alike can benefit from the impressive leadership skills built over a military career. ‘The world relies on inspired leadership to enact change and people with military experience are among the best leaders in the world” he says. “If we combine these skills with the high-calibre business education offered at AGSM, people like Richard can go on to make a real difference in the business community – and the AGSM scholarship provides access to that.”

As an ex-Special Air Services Officer, and now Director and Founder of training company, Recon Leadership, Winnall agrees that the combination is the key to success. “The AGSM MBA is a great experience for veterans and this scholarship provides a rare opportunity to take 16 months to immerse themselves in learning and build connections and a life-long network. I didn’t go into my MBA to become an entrepreneur, I simply wanted to take some time out and decide what to do next. I ended up with the opportunity to do some consulting work with Bain on graduation, and the trifecta of military training, an AGSM MBA and consulting experience turned out to be the key to being successful in business.”

Both graduates will share their experiences as mentors on the scholarship program.

The AGSM Military Scholarship will reopen for 2018 applications in January 2017 and is open to all veterans or currently serving members of the Australian Defence Force who have served continuously for at least five years, regardless of rank. Find out more.