The present language of human rights cannot adequately capture the types of rights that exist in socialist societies like Cuba, writes Dorothea Anthony.

OPINION: Make no mistake – the language of human rights is a powerful tool of international politics. It can shape the way we think about other countries. We are wide open to suggestion when we hear the words human rights, because they sound so pure and precious. How could any country get away with violating them? Shouldn't we target violators, and stop them?

Cuba is a classic example of a country targeted for its human rights record. Western governments and human rights groups have long charged Cuba with breaching basic liberties. Whether or not evidence can be furnished of any breach is immaterial. The United States used the charges to justify the CIA-sponsored Bay of Pigs invasion of 1961, and to justify imposing decades of harsh economic blockades. The charges also underpinned calls by the United Nations Secretary-General for Cuba to open its economy to capitalist enterprise.

But there is a catch: the human rights message needs to be regularly reinforced for Cuba to strain under the pressure. The recent passing of Fidel Castro, an architect of the Cuban Revolution, presented an opportunity for this message to be renewed.

Within a short time of Castro's death, the Western press reacted. News piece after news piece reported that Cuban "state" television had announced the death. Even the state-owned Australian Broadcasting Corporation recited the point that it was not any ordinary television, but state television in particular, that disseminated the information of Castro's death.

Generally, Western media is dismissive of societies in which the media is controlled by the state, where media is not "free". It is ironic, then, that the media sought to add authenticity to their reports of Castro's death by invoking the assumed legitimacy of Cuba's state-controlled television – a conundrum that underlines the challenges of applying blanket human rights charges against a society that does not fit the Western mould.

The press did make some positive comments about Cuba's human rights record. It recognised Cuba's reputation for satisfying rights to health care and education. Few could deny that the state of these rights is particularly advanced for a developing nation.

However, the focus was on the state of civil and political rights in Cuba. Castro was indicted for denying freedom of expression and all manner of individual freedoms to the Cuban people. To support these claims, news outlets drew inspiration from Amnesty International, an organisation established to hold to account countries that do not practise liberal values. The organisation assured anyone with a proclivity to hero-worship Castro that "the control of the state over all the aspects of Cuban life remains a reality".

Leaders of the Western world made similar remarks. The US President-elect wanted us to know in no uncertain terms that under Castro, Cubans have been denied "fundamental human rights".

Yet there is a problem with making a human rights assessment of the Cuban situation and Castro's legacy. The problem is that the present language of human rights cannot adequately capture the types of rights that exist in the type of society that Cuba represents, namely, a socialist society.

The most prominent right in socialism is freedom from economic exploitation. This right ensures that no private profit can be made by exploiting a person's labour. It is a right specific to working class people in working class-led societies. As such, the right has not been recognised in statements of universal human rights. 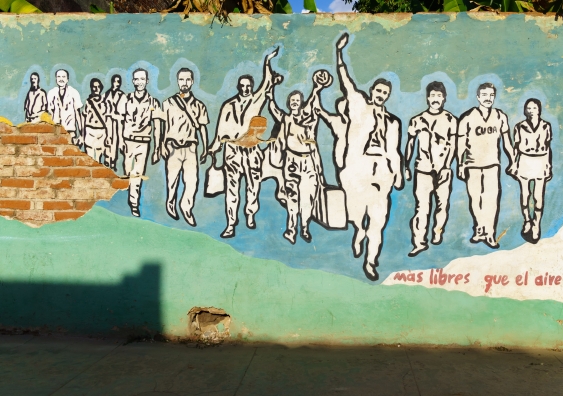 In one of its more progressive moments in 1969, the General Assembly of the United Nations supported "forms of ownership of land and of the means of production which preclude any kind of exploitation of man". But this turned out to be an anomaly. The Universal Declaration of Human Rights, which continues to be the major source of human rights, instead celebrates the right to property, where this right could include private ownership of the means of production. Furthermore, following the fall of the Soviet Union, it has become increasingly accepted internationally that human rights are those rights that complement Western-style democracy.

So where does this leave the human rights story of Cuba? It is not likely to be particularly convincing to Western ears when narrated in the voice of the Cuban people. We are led to think that it can only be told from the perspective of a Western writer, a Western director, and Western actors. How freedom from exploitation operates and springs into the welfare and cultural rights that the Cuban people enjoy today would over-stretch the imagination of people immersed in Western ideals of human rights.

The passing of Castro has seen Western society relish the opportunity to again judge Cuba's human rights record in the only way it knows how. Its human rights advocates cannot be accused of erring in the eyes of international human rights law. However, just maybe, there are some shrewd, broader thinkers who will question the human rights paradigm, lest one man be remembered for the wrong reasons.

Dorothea Anthony is a Sessional Lecturer and PhD Candidate at the Faculty of Law, UNSW.

This opinion piece was first published in Online Opinion.