Four UNSW teams comprising of Business School students have made it through to the regional finals of the Hult Prize and will compete to pitch their solutions to improve the lives of 10 million refugees by 2022. 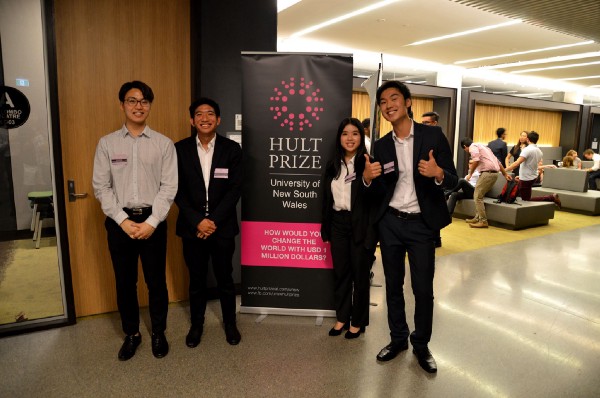 Four UNSW teams comprising of Business School students have made it through to the regional finals of the Hult Prize and will be flying to London, Boston, Dubai and San Francisco to compete to pitch their solutions to improve the lives of 10 million refugees by 2022.

The Hult Prize is a world-wide competition for budding young social entrepreneurs. The prize invites students to create and launch the most compelling social business ideas that tackle issues faced by billions of people. This year the theme was improving the lives of 10 million refugees. The eventual winners will receive US$1 million in seed funding for the social business idea.

Campus Director for the Hult Prize at UNSW, Jessica Dharmasiri, says “I think the Hult Prize is an amazing initiative and a really worthwhile opportunity for students to fuel their creativity and academic insights into a business which addresses a social challenge.”

“It's a chance to work collaboratively, build networks, learn from others, and do some good for the world. I honestly think that with the right mindset and enthusiasm, any enterprising young individuals should give the Hult Prize a chance.”

The quarter-final round of the competition, held on the UNSW campus in November and December, saw 25 teams compete for the chance to head to the regional finals.

First prize went to Vistarr for its unique credit scoring system, which takes into account social and behavioural factors, to help refugees’ access capital and create their own businesses.

Second place went to CleanH2Go for the development of a water filter that can be secured to any type of bottle with a unique clamping mechanism.

The filter aims to remove 99.9% of bacteria and improve access to clean water, especially in refugee camps. Liam Luangrathrajasombat, John Huang, Kevin Kim and Lisa Banh will compete in Boston. Third place went to MiniEpi for the development of a pocket-sized adrenaline auto-injector used to treat life-threatening allergic reactions. Andrew Fong, Ben Dalby and Andrew Ham will compete in Dubai.

A fourth team, made up of Jessica Dharmasiri, Joey Li and David Ky received a ‘wild-card’ entry to compete in London. The team is currently developing an enterprise in the area of food security, sustainable urban planning and access to energy.

Jessica Dharmasiri explained that it had been a record breaking year for UNSW entrees, “Last year only two teams made it to the regional finals, and this year we have doubled that number. Generally Hult Prize allows a maximum of 5 teams to compete in the regional finals (one team per university per regional final), however we only had four teams applying - it's great that all four got through.”

The international competition is supported by US President Bill Clinton, who selects the challenge and will host the Hult Prize global finals at the Clinton Global Initiative annual meeting in New York in September.

More than 50,000 teams around the world have entered this year’s competition and 400 teams will compete in the regional finals, held 3 – 4 March.