Where were all the women in the Stone Age?

Were there any women around in the Palaeolithic Era? If popular culture is any guide you’d think not, writes Darren Curnoe. 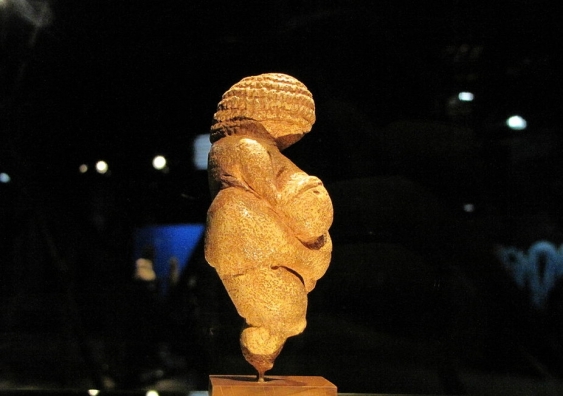 OPINION: Were there any women around in the Palaeolithic Era? If popular culture is any guide you’d think not. And even archaeology itself has a long way to go to address a deeply ingrained bias towards men.

It’s obvious that without women Homo sapiens could hardly be here today. But our cultural imaginings of the Palaeolithic evoke images of ‘man the hunter’ or ‘man the tool maker’ because that’s how our evolution has largely been portrayed by scientists and artists (with a few notable exceptions).

Google ‘stone age women’ and see what pops up under the images tab. Row after row of pictures of women in skimpy clothing or revealing party costumes (I recommend ‘safe search’ for this exercise). But Google ‘stone age men’ and see the difference. Beautiful drawings and paintings of scenes of daily life in the Palaeolithic, handsome athletic men making or carrying weapons, or hunting savage beasts, or tending fires.

To be sure, there are some famous and recurring examples of cave women, like a scantily dressed Rachel Welch in the 1966 remake of One Million Years B.C. or Wilma and Betty from The Flintstones. By the way, both are perennial favourites with Creationists, confirming that humans and dinosaurs lived side by side.

But these are more a reflection of modern male fantasy and 1960s notions of gender roles than they are a true sampling of the Stone Age.

And think for a minute about those big history narratives about the Stone Age. Scientists unwittingly perpetuate male bias in these overly simplistic stories. Humans invented stone tools, began to hunt animals with them, or chased them down with our running abilities, and started to cook and eat them with fire.

As a consequence, we evolved our large brains, invented culture, and begin to speak and make music and art.

It’s not easy to get at the issue of the roles played by the two genders or how gender itself was even constructed in the past.

These activities are routinely associated with men (tools, hunting, fire, art etc.), so logically, men must have made the big advances that led to the evolution of Homo sapiens while women were peripheral players in this evolutionary end game.

Even the term ‘hunter-gatherer’ has rightly been criticised by feminist archaeologists who in the 1970s and 1980s argued that ‘gatherer-hunter’ would be a more appropriate nomen given that in most groups women provided the majority of food that sustained them.

Does any of this matter? Sure it does. We limit understanding of our collective past when ever we take a narrow (biased) approach to investigating it. And in this case, we’re missing half the picture!

But it’s not easy to get at the issue of the roles played by the two genders or how gender itself was even constructed in the past. It requires us to ask basic questions like, ‘who painted the rock art?’ or ‘who hunted the animals?’ or ‘who made the stone tools?’.

More often than not, we have no idea. But it sure doesn’t help to just assume men did it. Let’s take a quick look at some examples where Palaeolithic women or their activities tell us something about our past.

It’s well known that in most hunter-gatherer groups women used grinding stones to process food. Grinding stones have been found in Israel dating back at least 12,000 years ago associated with ovens, suggesting the routine making of dough and baking of bread. So, the signatures of women’s work shows that bread making and baking, and even eating grains and wheat, date well back into the Palaeolithic.

Another fabulous example is art. For over 100 years we assumed that men were behind the amazing panels of rock art discovered in places like Lascaux Cave in France, or more recently in the Maros karst caves of Sulawesi in Indonesia. Presumably the women were just too busy looking after the kids to find the time to paint?

But at El Castillo Cave in Spain some of the art, specifically hand stencils, were probably made by women. And they are among the oldest rock art in the world, dating to at least 41,000 years old.

Cueva del Castillo in Spain showing paintings of large mammals and human hand stencils. The oldest examples of stencils are thought to be around 41,000 years old and some were made by women. (Source: Gabinete de Prensa del Gobierno de Cantabria). Wikimedia Commons

Even more remarkable are the ‘venus’ statues found at several caves in Western Europe. The main image at the top of this story is the Venus of Willendorf, a small statue of a woman found in Austria, and dating to around 28,000 years old. And below is the Venus of Hohl Fels Cave, from southern Germany, some 35,000 years old.

Both portray women in full voluptuous beauty. Exaggerated breasts, buttocks and vulvae, with large pads of fat around the hips, abdomen and thighs. Today we’d describe them as being obese. But in the past? Who knows. A body form to aspire to have?

Archaeologists have speculated about what they might mean. Were they symbols of reproduction, fertility and pregnancy? Might they have represented women throughout their entire adult life, with womanhood rather than just motherhood being honoured? Or could they simply have been the earliest examples of pornography?

One thing is for certain, they throw our modern notions of beauty right out the window, and make us realise that ideas of female body image are not static. They also connect us tangibly to our past, reminding us that our ancestors were a lot like us after all.

And they bring home the self-evident truth that women played a major role in past societies and, of course, our evolutionary story. We archaeologists need to work much harder to discover more about that role, beyond the obvious reproductive or economic. Failing to do so does us all a major disservice.