Tracking the storm: the science behind Tropical Cyclone Debbie

The category four cyclone – the fifth storm of this year's season, and the strongest so far – has buffeted the Queensland coast across a wide area centred on Airlie Beach, writes Liz Ritchie-Tyo. 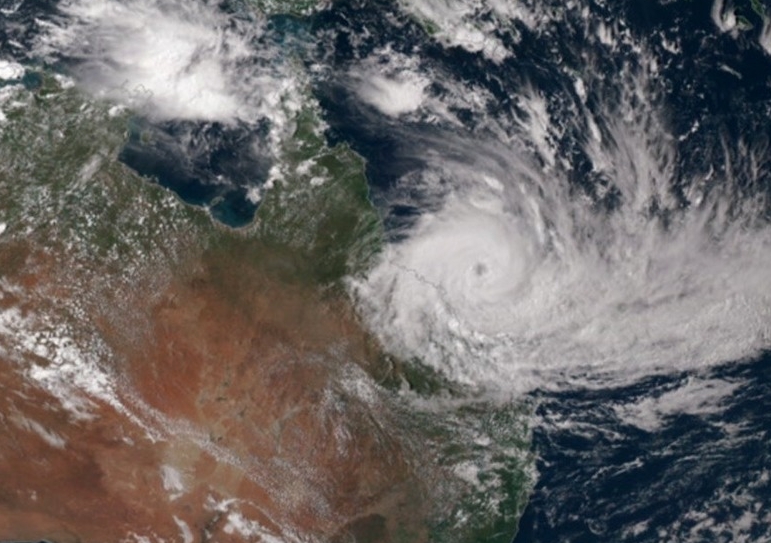 OPINION: Tropical cyclone Debbie has made landfall in Queensland as a category four cyclone with winds of more than 150 kilometres per hour.

The cyclone crossed the coast near Airlie Beach on Tuesday afternoon. Reports of wind gusts in excess of 200km per hour and rainfall of more than 200mm of rain have been made in some areas along the central Queensland coast.

The Bureau of Meteorology forecasted an average to above-average number of Australian cyclones in its October severe weather outlook. Australia receives 11 cyclones on average each year, with about four of those in Queensland. Debbie is the fifth cyclone of the season for Australia as a whole and the most intense of the season so far.

Anomalously high moisture, warm ocean temperatures, and low environmental pressures seem to have created the conditions that allowed TC Debbie to form and grow in intensity.

Tropical cyclones are low pressure systems that form over warm tropical oceans. The warmth and moisture of the oceans are what gives a cyclone its energy. The low pressure, which meteorologists measure in “hectopascals”, draws in the surrounding warm, moist air, which then rises into deep thunderstorm clouds. As the air is pulled into the centre of low pressure, Earth’s rotation causes it to spin cyclonically and it continues to intensify.

TC Debbie formed at the eastern end of an active monsoon trough extending from the Indian Ocean across the top of Australia and into the Coral Sea. The monsoon trough is a region of low air pressure and thunderstorms that forms over northern Australia in the summer months, bringing with it the wet season. On March 22, a large region of active thunderstorms began to organise into a weather disturbance off the eastern tip of Papua New Guinea.

Over the following two days the thunderstorms organised about a circulation centre as sea level pressures began to drop and moist air converged into the area. By late on March 24 a tropical depression, a forerunner of a cyclone, had formed and begun to drift south, making a long S-shaped track.

Tropical Cyclone Debbie was named on March 25. It then came under the influence of the subtropical ridge, a zone of stable high pressure that gives much of Australia’s fine weather during the summer. This drove Debbie west-southwest towards the Queensland coast while it gradually intensified further.

Because of the relatively high amounts of moisture in the atmosphere, and relatively warm ocean waters, Debbie intensified to category 4 by 10 pm on March 27, with the strongest wind gusts reaching 225-280km per hour. On Tuesday afternoon Debbie was a strong category 4 cyclone with a central pressure of 943 hectopascals and surface sustained winds of 185 kilometres per hour. The Bureau of Meteorology downgraded TC Debbie to a category 3 at 4:00 pm EST.

To put Debbie in context, there has been only one cyclone since 1980 to have made landfall in Queensland with a lower central pressure. That was Yasi in 2011.

Of the 46 cyclones to have made landfall in Queensland since 1980, only three others arrived at the coast with pressures of less than 960 hectopascals: Dominic in 1982, Winifred in 1986, and Ingrid in 2005.

Tropical cyclone forecasters use a variety of tools to forecast the storm’s track, intensity, storm surge, and rainfall. Because it is difficult to obtain observations of wind at the ocean’s surface under a cyclone, meteorologists have developed tools based on satellite imagery to estimate a storm’s intensity, location, and where the strongest and most destructive winds are found.

Several models are also used to aid in making forecasts – from the complex numerical weather prediction models, to statistical models. Models start by using observations of the atmosphere, and then use these data to make a forecast.

Depending on their level of complexity the models can predict the future track, intensity, rainfall, wave height, and/or storm surge. The forecasters access all of this information to then make their forecast.

Intensity forecasts have improved more slowly, but as models have become more refined and satellite technology has improved, the ability of forecasters to accurately estimate and predict intensity is also getting gradually better.

The prediction of rainfall, the extent of the damaging wind field, and storm surge forecasts are also slowly improving. Now that they are receiving more attention, we can expect considerable improvements in these over the next decade.