Why we’re marching for science in Australia

March for Science rallies will take place in cities around Australia on Saturday 22 April. Stuart Khan explains why he and others are participating. 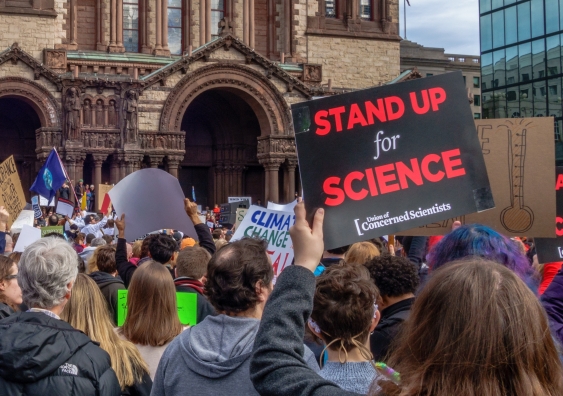 OPINION: In late January this year, a group of mainly US-based Reddit users were discussing a recent report that all references to climate change have been deleted from the White House website. One user on the forum responded with the suggestion:

There needs to be a Scientists’ March on Washington.

And thus the seed of a global movement was planted. Within hours, a proposed March for Science in Washington DC had a website, a Facebook page and a Twitter handle.

Within a few days, “sister march” sites began to appear from across the United States and around the world.

A diverse group of individuals initiated social media sites in cities throughout Australia. These included a university professor in Brisbane, a year 12 high school student in Western Sydney, a number of current postgraduate students in Adelaide, Perth and Townsville, and a recent PhD graduate in Canberra.

It occurred to me and others that it might be helpful to establish links between these disparate and diverse groups. Doing so would facilitate cooperation, hopefully leading to improved planning and a united voice.

We are now working cooperatively to organise rallies in support of science in cities including Sydney, Melbourne, Brisbane, Perth, Adelaide, Canberra, Townsville, Hobart and Launceston. The list is growing quickly with local groups in more cities organising every week.

As stated on our website, the March for Science celebrates the public discovery, distribution and understanding of scientific knowledge as crucial to the freedom, success, health and safety of life on this planet.

We are a nonpartisan group, marching to demand action in areas of literacy, communication, policy and investment.

Universal Literacy: A well-informed community is essential to a free and successful society. We support education to promote broad public knowledge and discussion of scientific work. As professionals, parents and community-engaged volunteers, we enthusiastically contribute our time and expertise to helping children and students of all ages engage with the physical universe and biological world.

Open Communication: Publicly funded scientists have a responsibility to communicate their research, and public outreach and accessibility of scientific knowledge should be encouraged. Communication of scientific findings and their implications must not be suppressed.

Informed Policy: Public policy should be guided by peer-reviewed evidence and scientific consensus. Public policy must enable scientists to communicate their publicly funded research results, and must support literacy in science, technology, engineering and mathematics.

Stable Investment: A long-term, strategic approach to investment in scientific research and development is essential for driving true innovation. Government commitment to stable science funding policy will deliver solutions to complex challenges, promoting prosperity for all.

These are the core principles for which we march. A range of recent events have fuelled a sense of timeliness in the need to better promote the value of these principles in Australia.

In 2015, Commonwealth government funding for research and development dropped to the lowest it had ever been at just 0.4% of GDP. This placed Australia near the bottom of a list of 18 OECD countries, behind Portugal, Russia and Greece, but ahead of just Slovakia and Spain.

The abolition of key science-focused national bodies, including the Climate Commission in 2013 and the National Water Commission in 2014, were widely taken as a sign that the Australian government was no longer so interested to receive expert science-based advice on these issues.

In efforts to publicly justify these cuts, CSIRO chief executive Larry Marshall characterised internationally respected Australian scientists, who opposed them, as “the climate lobby”, stating “in fact it almost sounds more like religion than science to me” – a statement for which he subsequently apologised.

Such belittling and ridicule of Australian science and scientists does our society no favours. Research from the Australian National University in 2014 showed that when asked unprompted, Australians identified friends and family (12%) and CSIRO (also 12%) as the most commonly mentioned trusted sources of accurate information about science. A considerable number of the respondents (30%) either did not know who to trust (21%) or did not trust anyone (9%).

Physicist William Happer is in the running to be US President Donald Trump’s science adviser, although he doesn’t believe in anthropogenic climate change. Gage Skidmore, CC BY-SA

Failure to effectively promote trust in science and our scientific institutions may explain many of the gaps that exist between available scientific evidence and public attitudes.

One example is the gap between scientific findings on the safe use of genetically modified crops for food and public acceptance of these findings. A recent Australian study revealed that attitudes toward genetically modified organisms for food were significantly associated with trust in scientists and regulatory agencies.

Similar discrepancies between scientific evidence and public acceptance exist in Australia for the safety of drinking water fluoridation, the safety of community vaccination programs and the safety and other impacts of wind turbines.

There also appears to be an unwillingness to adopt science and evidence in the development of some areas of public policy in Australia. The most glaring and high-profile example is the urgency with which societies must reduce fossil fuel combustion, thus reducing atmospheric emissions of carbon dioxide to limit global climate change.

Statements such as those by former Prime Minister Tony Abbott that “the climate change argument is absolute crap” and the promotion of fossil fuels as “good for humanity” reveal the lack of appreciation that some of our most high-profile political leaders hold for this urgency.

This attitude may be contributing to the Australian government’s pursuit of new coal mines and coal-fired power stations, and lack of enthusiasm for the development of cleaner energy sources.

A greater appreciation for the benefits and opportunities of science could come from improved scientific literacy among Australian primary and high school students.

There is compelling evidence for the need to improve the standing of science in Australian society. However, the March for Science is a global movement and it has clearly been triggered by recent activities in the US.

Whether we’re taking a stand for science in Australia or science in the US, these are essentially the same thing. Science is a global pursuit of knowledge with high degrees of collaboration between countries. Research findings from different research teams build upon one another to continuously grow the global knowledge base.

When Australian climate science was observed to be suffering during CSIRO funding cuts, US scientists were quick to defend the work undertaken by their Australian colleagues. A leading scientist from NASA appealed to CSIRO to abandon any plans to cut a key monitoring program, arguing that it would undermine Australia and the world’s ability to monitor and predict climate change.

We live in a world where our major challenges are of a global nature, and science that offers our best opportunity to meet those challenges is equally global in its importance.

It is for all of these reasons that I have chosen to volunteer my time to help organise opportunities for Australians to March in support of Science. I hope you will join me and many others as we do so on April 22.