The discovery in the Pilbara of the oldest evidence of land-based life could help in the search for life on Mars. 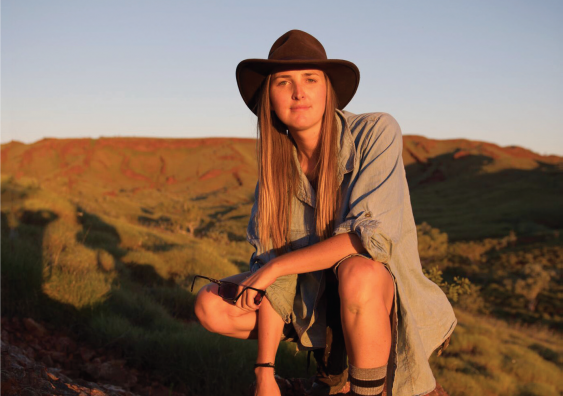 Evening was drawing in and UNSW research student Tara Djokic was ready to call it quits on a long day in the field. For hours she had trekked up and down the 3.5-billion-year-old red rocks of the Pilbara in Western Australia, painstakingly identifying signs of early life on Earth and geological clues about the environment in which these ancient microbes once existed.

“It was in 2013, and I came across a steep little valley that led up to the crest of a ridge, and thought it would be a great short cut home,” she recalls. “Then I saw an interesting-looking mound of rock and curiosity got the better of me. So, I decided to take some notes and a few samples. It was a little serendipitous.”

One of those samples, a rather small piece of rock, had a texture she had never seen before – a series of swirling, extremely thin black and white layers. “And the really cool thing was that it was exceptionally well preserved,” she says.

Back in Sydney, she showed the unusual sample to UNSW Professor Malcolm Walter, who examined a slice under a microscope and came to a game-changing conclusion: the rock could be geyserite – a mineral deposit formed by the near boiling, silica-rich fluids only found in terrestrial hot springs.

"The Pilbara deposits are the same age as much of the crust of Mars, which makes hot spring deposits [there] an exciting target for our quest to find fossilised life."

“That was very exciting,” says Djokic, who is now a PhD candidate. “We’d known for decades that microbial life existed 3.5 billion years ago in the Dresser Formation in the Pilbara, but the geyserite suggested some of these ancient microbes lived in freshwater hot springs on land, completely restricted from the sea.”

In May this year, four years after Djokic wandered through that little valley, her discovery made big news around the globe. In a paper in Nature Communications, the UNSW Science team of Djokic, Walter, Professor Martin Van Kranendonk and Professor Colin Ward, along with Professor Kathleen Campbell from the University of Auckland, presented their case that the Dresser Formation contains the oldest evidence of land-based life on Earth.

If correct, the find pushes back the record by about 580 million years. Their find also pushed back evidence of geyserite and hot springs by a whopping three billion years. And it lends weight to Darwin’s theory that life originated on land in a “warm little pond”, rather than in the salty sea.

It also has important implications for the search for fossil life on Mars when NASA’s rover touches down in 2020. “The Pilbara deposits are the same age as much of the crust of Mars, which makes hot spring deposits [there] an exciting target for our quest to find fossilised life,” says Van Kranendonk, whose geological advice has helped NASA whittle down potential landing sites for the upcoming rover mission.

The Mars rover will endeavour to search for signs of past life in a region of Mars thought to have had conditions long ago favourable for microbial life. It will also collect samples for potential return to Earth for analysis.

As a pioneering step towards how humans could use Mars’ natural resources, the rover will conduct an experiment to extract oxygen from its atmosphere.

Back in Australia’s Pilbara, the new understanding of fossil deposits is the culmination of decades of study by different researchers. Fossilised, cone-shaped, layered structures called stromatolites were first discovered there in the 1970s.

It was initially thought the microbes that built these stromatolites lived in a quiet, shallow sea, much like we see today at Shark Bay on the Western Australian coast.

It was Van Kranendonk, the head of the UNSW School of Biological, Earth and Environmental Sciences and Director of the Australian Centre for Astrobiology, who in the early 2000s showed these fossil-bearing rocks were in fact part of an ancient volcano that had a huge amount of hot water circulating beneath the ground. Djokic’s small piece of geyserite has confirmed that some of this hot water ejected on to a land surface, rather than the ocean, and manifested as hot springs.

On 18 August, UNSW Science will also hold a Women on Mars event for female high- school students with speakers including Djokic and UNSW Dean of Science, Professor Emma Johnston. 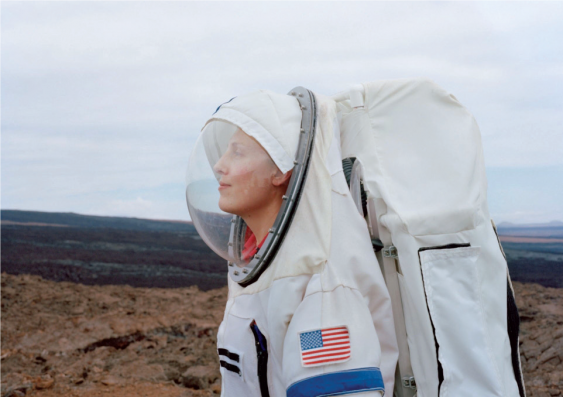 The first female commander of a NASA-funded Mars mission simulation and former UNSW academic Martha Lenio has gained a deep understanding of what it might be like to travel to Mars.

As the first female commander of a NASA-funded Mars mission simulation, former UNSW academic Martha Lenio has gained a deep understanding of what it might be like to travel to Mars.

In 2014, Lenio, who completed her PhD in photovoltaics, and five others entered the Hawaii Space Exploration Analog and Simulation dome for eight months of simulated space travel.

How did you enjoy the mission?

I really enjoyed it and my team and I are still good friends, so for me that means it was a really successful mission. As commander, I was often the mediator. What I found is that I took my “mothering ability”, to another level. I’m the oldest of five, so taking care of the people around me comes naturally.

What was it about your mission that made it so successful?

Even when times were tough, our crew was diligent about ensuring NASA got 100% of the results that they wanted to get. There is the technological and physical survival side of the mission, but with humans there’s the whole social aspect, too.

But with us that didn’t happen. When our social structure degraded a bit, we were still able to meet NASA’s needs and goals. One of the researchers remarked to me at the end that we turned socialising into a task that everyone was committed to doing rather than something we did for fun. Maybe that was an important thing they learned.

As gardener-in-chief, how did your garden grow?

I tried growing so many different things. I grew lettuce, tomatoes, carrots, mushrooms, onions and just about all the herbs. We grew wheatgrass and flowers, too, just for the fun of it. The crew got the most enjoyment out of the herbs because we could harvest them continuously and it just added so much to a meal.

How did you make life fun in such close quarters?

We marked and celebrated time. You don’t think of the passage of time as that important when you’re in the outside world, but in the dome it was a really big deal. Days merge and you’ve got no sense of time. We were the first crew to be in there for every major holiday. If we felt we hadn’t had a celebration in a while we’d look to our “space calendar” and say, “Ah, this was the day the first female astronaut went to space, let’s celebrate that.”

When did you first dream of becoming an astronaut?

What’s the connection with sustainability?

The more sustainable you can make space travel, the further you can go. In space, you’re living off renewable energy. You have to recycle all of your air and water, and ideally all of your organic waste back into food.

You got down to the last 70 applicants (out of more than 3,000) who applied for the two Canadian positions for NASA. Will you apply again?

I was actually a lot more disappointed than I thought I would be when I didn’t make it out of the final 70. I will definitely be applying again.

This Q&A first appeared on the UNSW Engineering website.