The rise of the plyscraper 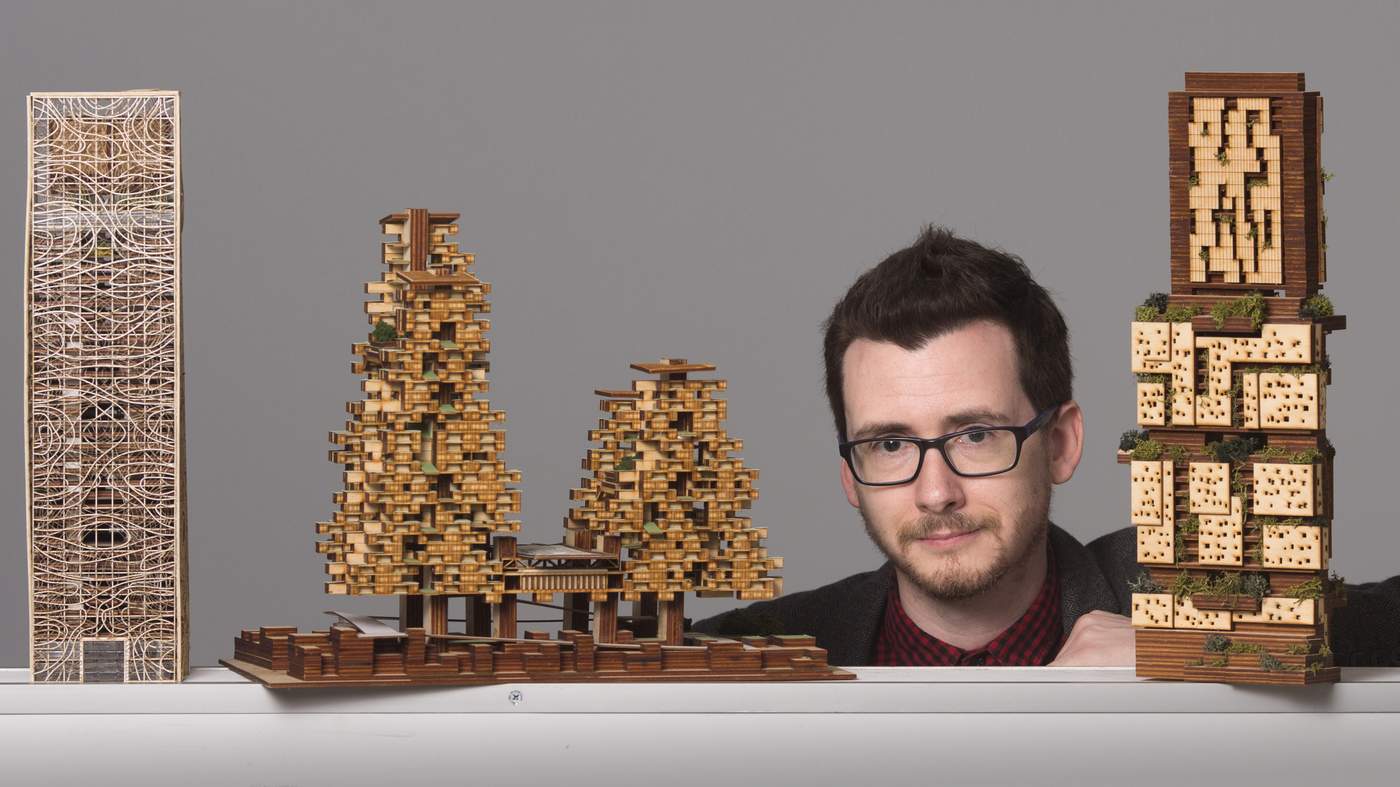 A wooden skyscraper? It sounds like something from Middle Earth. Wood is what you use to build log cabins, tree-houses, saunas. But high-rise?

It’s happening all over the world, including Australia, where International House Sydney at Barangaroo has set the example for others to follow. Aided by breakthroughs in the manufacture of materials, and a push for sustainable urban living, wooden towers have emerged at the cutting edge of community-friendly architecture.

“Australian builders have been fairly slow in the uptake but as soon as there are precedents, more and more people will be on board,” says Dr Philip Oldfield, a senior lecturer in the Faculty of Built Environment at UNSW.

The UK architect, who moved to Australia 18 months ago with his young family, became fascinated with skyscrapers as a boy growing up in Nottingham. “I was always interested in tall buildings but they left me cold. All I saw was monotony, banality, big, glass boxes. They always seemed to be more about economics than good design,” he says.

As he studied architecture, and grew increasingly aware of the challenges of climate change and population growth, Oldfield became part of a group spearheading a movement aimed at designing tall buildings that are sustainable, green and welcoming to live in. This “high-performance architecture”, as he calls it, is a crucial aspect of UNSW’s Master of Architecture program.

One thing is certain, Oldfield says, the world’s exponential population growth and a rise in urban living mean more and more of us will be living in high-rises as well as working in them. “So we might as well try to get it as right as we can.”

Oldfield’s upcoming book, The Sustainable Tall Building, highlights the possibilities. There’s a timber-clad, family apartment in a Norway high-rise, a soaring, sun-splashed, vertical school in a New York skyscraper, and a seven-tower residential block in Singapore linked with green walkways, that includes a sky-high running track, a children’s playground and lush hanging gardens.

The use of timber has been embraced to build commercial buildings, which have a much lower level of “embodied carbon” than conventional buildings, making them far more environmentally friendly. This happens because trees absorb carbon dioxide from the air through photosynthesis, and so timber has the ability to store carbon and remove it from the atmosphere.

“My research is showing that materials typically equate to 33% of all the carbon emissions of a tall building. So if we build them out of timber, we can dramatically reduce their carbon footprint, creating sustainable powerhouses,” Oldfield says.

The trend has been enabled through a breakthrough in the manufacture of extremely strong wood known as mass timber. This involves laminated timbers being glued together at right angles under extreme pressure to form giant pieces of wood. These can be as equally strong as conventional building materials such as steel.

The timber pieces are typically up to 40cm thick, but have been proposed to be made up to 2.5m thick, and 2.5m wide. Builders have increasingly begun considering using this heavy-duty engineered timber, prompting the moniker ‘plyscrapers’.

The safety of high-rise buildings has always been an issue, highlighted by the tragic Grenfell apartments fire in London. Yet as counterintuitive as it sounds, this engineered wood can be just as safe – if not safer – than steel, in a fire.

“Steel starts to lose its strength at 550 degrees Celsius, after which it will just buckle and collapse. By contrast, engineered timber has been manufactured in a way so that the exterior chars, leaving the core of beams and columns intact, and people inside the building have time to get out.”

The good news is Australia is leading the way when it comes to rethinking our skylines.

Designed by Alec Tzannes, former Dean of the UNSW Faculty of the Built Environment and one of Australia’s most respected architects, and Jonathan Evans, the soaring, light-filled space with its colonnade of recycled iron bark timber, is a hymn of praise to wood. And it has impressive green credentials. By not using concrete, thousands of tonnes of greenhouse gases were avoided.

“These new high-rises are going to totally transform buildings that have traditionally been seen as gas guzzlers. It’s a “new form of beauty” according to Tzannes. “Normally, building sites are full of dust that gets in your eyes. But when you walk out into this building, it smells like a pine forest,” he says. “It’s like entering another world. When you look out to the more conventional buildings all around, it’s all the more beautiful. It recreates the beauty of historic buildings in the past.”

The mass timber panels, grown in sustainable forests in Austria, were prefabricated, craned on to the site, then slotted and screwed into place by a small construction team.

Having been recently tenanted by Lendlease, Tzannes regards the building as a commercial trailblazer. “It is proving to the commercial real estate market that mass timber construction is a viable alternative to conventional concrete construction.”
Buildings like International House Sydney, Forte Apartments in Melbourne, and the upcoming King Street project in Brisbane, which are also built out of timber, are a blueprint for what is possible.

“The place we work in can have a huge impact on our lives, as well as our wellbeing,” Oldfield says. Natural materials provide a warmth that concrete and steel struggle to achieve.

“These new high-rises are going to totally transform buildings that have traditionally been seen as gas guzzlers. Instead of air-conditioned boxes, we will be seeing much friendlier buildings that are more generous to the environment.”

When you walk out into this building, it smells like a pine forest.

And more generous to the community as well. “High-rise buildings should be more than just machines for living in. Ideally they should form part of the fabric of the city, and be able to make a difference socially and civically,” Oldfield adds.

A classic example is 1 Bligh Street in Sydney, a modern office overlooking Circular Quay. Its wide, north-facing steps provide a sunny public space where office workers can sit and enjoy lunch. Pedestrians can cut right through the 40-storey atrium, using it as a public thoroughfare.

“Part of the problem in Australia is that, up until now, we have designed tall buildings for the economy – simply as income generators – rather than thinking about communities or sustainability,” Oldfield says.

Yet the new tall towers are actually a lot more economically viable than their predecessors, as well as being good for the environment, he says.

“The Australian building industry is increasingly seeing the financial benefits of timber buildings. They are pre-fabricated in a factory, craned on to the site, and put together like a giant piece of IKEA furniture. The workforce needed is smaller, and the process is a lot safer.”

Already, several 20-storey buildings made out of timber are being built in Scandinavia and Canada. A timber tower up to 85 storeys high is also being planned for London.

“It’s a matter of helping people to think differently. We need to think about the big picture.”

The Sustainable Tall Building: A Design Primer, by Philip Oldfield, will be published in 2018 by Routledge.