A Crest-tailed Mulgara, a small carnivorous marsupial presumed extinct in NSW for more than century, has been discovered in Sturt National Park north-west of Tibooburra. 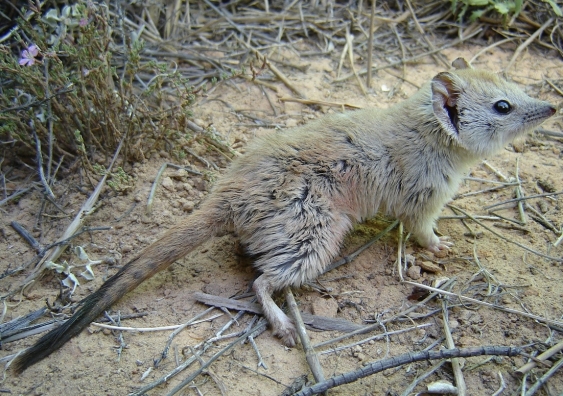 A Crest-tailed Mulgara, a small carnivorous marsupial known only from fossilised bone fragments and presumed extinct in NSW for more than century, has been discovered in Sturt National Park north-west of Tibooburra.

A team from the UNSW Sydney's Wild Deserts project made the unexpected discovery during recent scientific monitoring.

UNSW scientist and Wild Deserts ecologist Dr Rebecca West says it is particularly exciting to find a Crest-tailed Mulgara alive for the first time in NSW.

“The Crest-tailed Mulgara was once widely distributed across sandy desert environments in inland Australia, but declined due to the effects of rabbits, cats and foxes,” West says.

“The species weighs around 150 grams and has pale blonde fur and a thick tail with a distinctive black crest.”

The discovery comes at a great time, according to UNSW scientist and Wild Deserts project co-ordinator Reece Pedler.

“Next year we are due to begin introduced predator and rabbit eradication from a large area, which will no doubt help the Mulgara,” Pedler says. 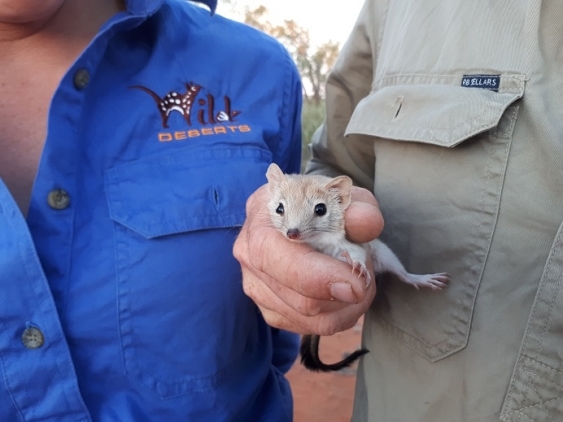 Reduced rabbit populations over the past 20 years are thought to have benefited the species. Photo: Katherine Moseby

“The aim of this project is to return mammal species not seen in their natural habitat for over 90 years in Sturt National Park,” he says.

“Rabbits, cats and foxes will be eradicated from two 20-square-kilometre fenced exclosures in Sturt National Park, before locally extinct mammals are reintroduced.

The Wild Deserts project is a partnership between UNSW and Ecological Horizons, in collaboration with Taronga Conservation Society Australia.

Wild Deserts has been contracted by the NSW Office of Environment and Heritage to restore and promote desert ecosystems in Sturt National Park.

Previous work in South Australia by Wild Deserts team members suggests that the Crest-tailed Mulgara has been recovering in numbers and expanding its range.

Reduced rabbit populations during the past 20 years due to release of rabbit calicivirus is thought to have benefited the species by leading to increases in ground cover.

Reductions in populations of introduced predators such as cats and foxes has also increased the numbers of small rodents for Mulgara to prey on.

In recent years, Crest-tailed Mulgara have expanded their distribution in the Strzelecki Desert over the border in South Australia.