Anthropocene began in 1965, according to signs in the world's 'loneliest tree'

OPINION: On Campbell Island in the Southern Ocean, some 400 miles south of New Zealand, is a single Sitka spruce. More than 170 miles from any other tree, it is often credited as the “world’s loneliest tree”. Planted in the early 20th century by Lord Ranfurly, governor of New Zealand, the tree’s wood has recorded the radiocarbon produced by above ground atomic bomb tests – and its annual layers show a peak in 1965, just after the tests were banned. The tree therefore gives us a potential marker for the start of the Anthropocene.

But why 1965? The 1960s is a decade forever associated with the hippie movement and the birth of the modern environmentalism, a sun-blushed age in which the Apollo moon landings gave us the iconic image of a fragile planet framed against a desolate lunar surface. It was also a time when the world was fast globalising, with rapid industrialisation and economic growth driving population expansion and a massive increase in our impact on the environment.

This postwar period has been called the “Great Acceleration”. So the question we’re interested in is whether this step change in human activity left an indelible mark on our planet, one which, if we disappeared today, would still leave a permanent signature in the geological record.

If traces of nuclear testing were present even on Campbell Island then the bombs must have had a truly global impact. Image: Turney et al

The concept of a human-dominated geological epoch has been around since the 19th century, but the idea that we have created an Anthropocene has recently become more popular in the face of long-term global changes in the environment far beyond what may be considered “natural”. While humans have long had an impact on the planet at the local and even continental level, the scale of modern change is sufficiently large that geologists are considering the evidence to recognise the Anthropocene officially in the geological timescale. They have set the scientific community a major challenge to find a global-wide environmental marker or “golden spike” that represents this crucial change. 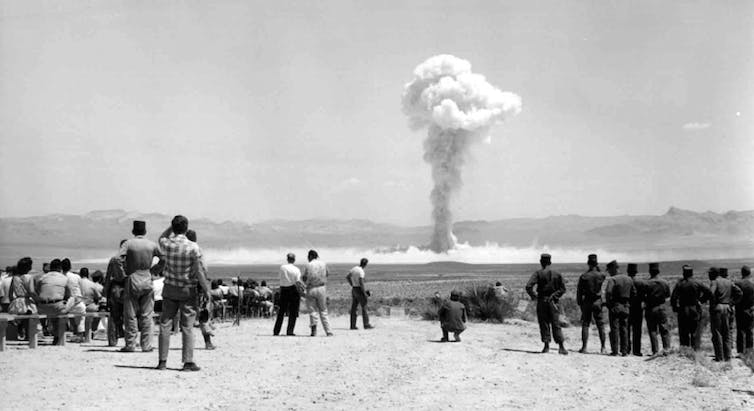 A major contender for defining the start of the Anthropocene Epoch is the peak in radioactive elements produced from above ground thermonuclear bomb tests, the majority of which occurred at the height of the Cold War in the early-1960s. The problem from a geologist’s point of view is most of the records of this spike in radioactivity (for example preserved in lake sediments and the annual growth of tree-rings) have been reported from the Northern Hemisphere where the majority of the tests took place. To demonstrate a truly global human impact requires a signal from a remote, pristine location in the Southern Hemisphere that occurs at the same time as the north. This is where our new study comes in.

In the journal Scientific Reports we publish a new record that identifies a radioactive signal preserved from exactly this sort of place: Campbell Island, a rare piece of real estate in the depths of the Southern Ocean.

During the Australasian Antarctic Expedition 2013-2014 we undertook scientific sampling across the island to get a better handle on the scale of environmental change in this most remote of locations. The solitary Sitka spruce is in the southern part of the island. The species is found naturally along the west coast of North America from Alaska to California – it is only in the Southern Hemisphere because humans transplanted it there. 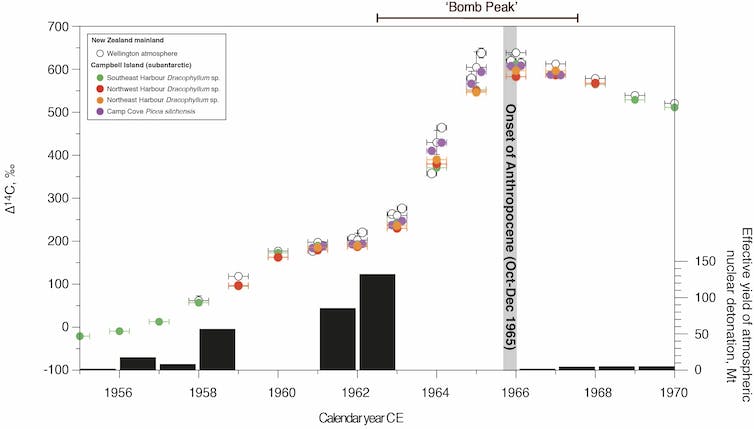 Nonetheless, the Campbell Island tree is growing exceptionally well – at a rate five to 10 times faster than surrounding native shrubs – which gave us plenty of data to work with. Detailed analysis of the tree’s year-by-year growth shows the peak in radioactive elements took place sometime between October and December 1965, which coincides with the same signal in the Northern Hemisphere. This spruce has demonstrated unequivocally that humans have left an impact on the planet, even in the most pristine of environments, that will be preserved in the geological record for tens of millennia and beyond.

Our research promises to reignite the debate around when humans really became a geological superpower. Should we define the Anthropocene by when humanity invented the technology to make themselves extinct? If so, then the nuclear bomb spike recorded in the loneliest tree on the planet suggests it began in 1965.