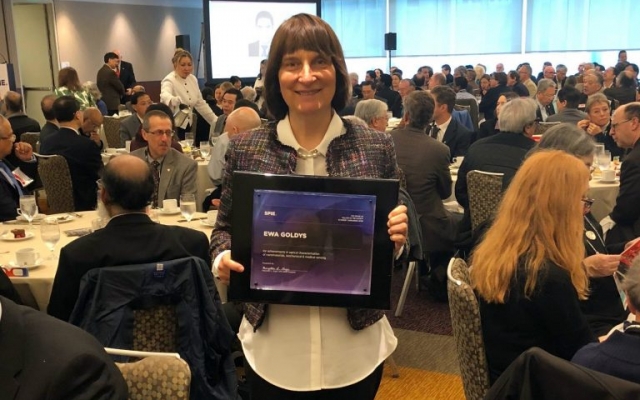 Professor Ewa Goldys from UNSW Graduate School of Biomedical Engineering has been recognised with a Fellowship of SPIE, an international society advancing an interdisciplinary approach to the science and application of light.

She was awarded the honour “for her achievements in optical characterisation of nanomaterials, biochemical and medical sensing”.

Professor Goldys is a UNSW SHARP hire under its 2025 Strategy, an initiative aimed at attracting 100 world-leading scholars.  She has led major research initiatives, including as founding Deputy Director of the interdisciplinary $40-million ARC Centre of Excellence for Nanoscale Biophotonics.

She is internationally renowned for the development and clinical application of advanced fluorescence techniques, with her pioneering research opening up a new field of inquiry of nanoscale upconversion, leading to next-generation cellular diagnostics.

Her pioneering discovery of a unique molecularly specific fluorescence “fingerprint” of cellular metabolism was recognised in 2016 with an Australian Museum Eureka Prize. This research can distinguish between healthy and diseased cells in areas as diverse as embryology, neurodegeneration, cancer and diabetes.

Each year it recognises accomplishments and meritorious service in the optics, photonics, and optoelectronics imaging communities it serves. This year, SPIE will admit 73 new Fellows of the Society.

Professor Goldys is also a Fellow of the Optical Society and a Fellow of the Australian Academy of Technological Sciences and Engineering, and collaborates widely with clinicians and with industry.

For more information on her research interests, please click here.