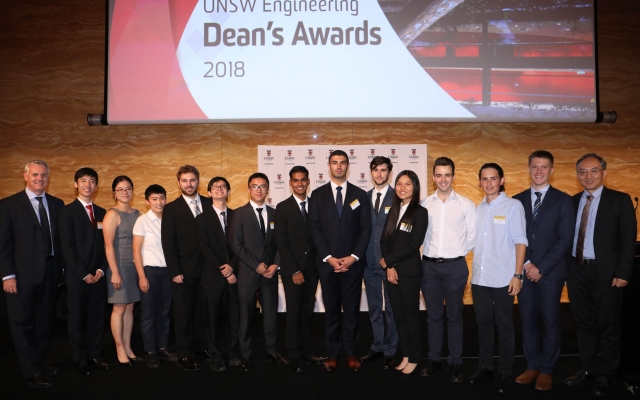 UNSW Engineering’s top students were celebrated at the Deans Awards at Leighton Hall on Tuesday 10 April.

The annual awards honour the top 100 undergraduate students, based on academic results from 2017, and this year four students also received Student Services Awards.

UNSW Engineering has the highest entry standards in Australia and the students we are recognising are therefore amongst the brightest of the bright. To excel here is to be the very best of the best.

Dean of Engineering Professor Mark Hoffman congratulated all the award winners for their “brilliance, patience and hard work”. He said the world would be a poorer place without engineers, and the Faculty was honoured to be supporting the future of engineering, both locally and globally, through its students, graduates and researchers.

“We know that the students receiving awards this evening have a very bright future ahead of them,” Professor Hoffman said.

“UNSW Engineering has the highest entry standards in Australia and the students we are recognising are therefore amongst the brightest of the bright. To excel here is to be the very best of the best.”

Albert Young was honoured for being an “outstanding supporter and contributor” who made a tremendous contribution to the School’s various marketing and recruiting activities and who worked tirelessly to promote the School through varied outreach activities.

Ling Ying Zheng was honoured for volunteering hundreds of hours to the UNSW Women in Engineering program. She was the brains behind a new outreach program in 2017: My Story school visit and also facilitated workshops for the Experience It! student conference and Power of Engineering workshops.

The Student Services team award was given to Joseph Daher and Jacqui Orme for establishing The Engiqueers Society to provide a supportive queer network for students within the Faculty. One of the main objectives of Engiqueers is to connect queer engineering students with queer-friendly industry companies.

Other speakers on the night included the Master of Ceremonies Dr Ray Eaton who is Associate Dean (Education) at UNSW Engineering. Students were presented their individual awards by the Heads of Schools.

Congratulations to all Dean’s Award recipients.