Gladys Berejiklian and Lucy Turnbull were among those honoured for their outstanding contributions to the community at the 46th annual UNSW Alumni Awards. 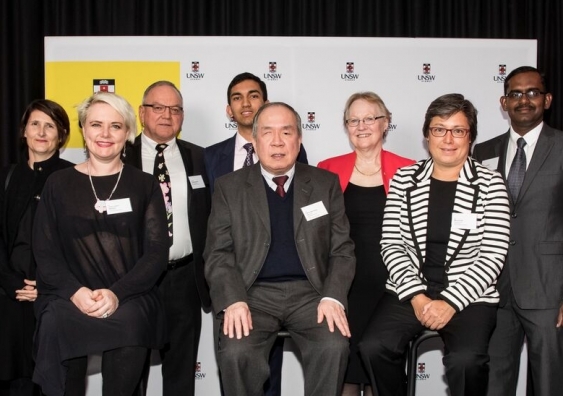 Gladys Berejiklian and Lucy Turnbull were among high achievers honoured for their contributions to the community at the 46th annual UNSW Alumni Awards.

Ms Berejiklian and Ms Turnbull were among 11 UNSW Sydney graduates chosen for awards from a group of alumni that included renowned medical minds, entrepreneurs, and champions of diversity in sport, art and engineering.

“Tonight, we honour the incredible achievements of our growing alumni community and recognise the remarkable individuals who are utilising their education for new achievements every day,” Mr Paparsenos said.

Presenting the awards, Mr Gonski noted the pride he felt about the university’s alumni community for their commitment to changing the world. He also highlighted the difficulty of selecting just 11 outstanding alumni winners from a pool of more than 300,000 people.

In the Design and Architecture category, Ms Turnbull received an award for her longstanding achievements in cities, technological and social innovation. Accepting the award on her behalf was the inaugural recipient of the Turnbull Foundation’s Women in the Built Environment Scholarship, Dr Cathy Smith.

Paul Clitheroe, the well-known ‘money guru’, won the Business award for his outstanding contribution to the community in helping improve financial literacy.

The inaugural Chancellor’s Award for Exceptional Alumni Achievement was bestowed on Gladys Berejiklian for her demonstrated passion, commitment and resilience in her role as 45th Premier of NSW.

Many of the night’s winners remarked on how their time at UNSW had shaped their ambitions and successes, and how valuable it was to be part of a diverse and appreciated alumni community.

Henry Pan was joined at the dinner by his two daughters, who are also UNSW alumni. He said he was honoured to receive the Social Impact & Public Policy award.

“The drive for me to spend so much time volunteering actually spurns from my feelings of gratitude to the University and the Australian community for providing an opportunity for me to study,” Mr Pan said.

Professor Elizabeth Taylor reflected on her decision to study at UNSW when accepting the Engineering award.

“UNSW is an organisation that moves far beyond economic metrics, with goals for social justice and changing the world,” she said.

“My education has been a very strong foundation for my career. I am a very proud UNSW alumni and I thank UNSW for the honour they have given me tonight.”

“I am enormously proud of the difference you have made to the lives of people here in Australia and around the world,” he said.

Attendees at the awards included the Governor of NSW, David Hurley, and state Minister for the Environment, Local Government and Heritage, Gabrielle Upton, also numbering among UNSW alumni.

An innovative digital designer and one of the world’s few female Chief Creative Officers, Laura has received much global recognition for her contributions to the creative industries, and in particular for her efforts championing diversity in the arts, having co-founded influential initiatives in support of women in creative space, including SheSays and the Great British Diversity Experiment.

Paul has played a highly influential role on the financial literacy of Australians. Known as a ‘money guru’, he regularly provides financial advice through a range of publications and media appearances. In addition to his commercial success, Paul is Chairman of a number of financial organisations, including the Australian Government Financial Literacy board. His charity, the Clitheroe Foundation, has distributed more than $2 million in grants and scholarships.

Chief Commissioner of the Greater Sydney Commission, and previously the first female Lord Mayor of the City of Sydney, Lucy is a leading businesswoman with longstanding achievements in cities, technological and social innovation. She was awarded an honorary Doctorate of Business by UNSW in 2012, and established The Turnbull Foundation Women in Built Environment Scholarship, supporting women to join the built environment industry.

Elizabeth is a celebrated ‘humanitarian engineer’ whose work has spanned design and construction, academia and volunteering. Through her work with Engineers Australia she has spearheaded many progressive initiatives in support of women in engineering, as well as ethical reviews. As Chair of the Cambodian Children’s Trust Australia and RedR she has facilitated the volunteer of experts into disaster zones to help relieve suffering.

As Director of Sydney’s Centre for Digestive Diseases, Tom has championed faecal microbiota transplantation (FMT) for 25 years. Through his pioneering work manipulating the bacteria that live in the human gut, Tom has made huge strides in establishing new treatments for Crohn's disease, colitis, auto immune-diseases and neurological conditions, while reportedly preventing 18,655 premature deaths, and saving $10.03 billion in health costs in Australia alone.

Saul is a multi-award winning inventor with an open approach to problem solving. Through successful startups he has invented new devices and materials such as a “smart” rope that senses its load, and a machine for making low-cost eyeglass lenses through a process inspired by a water droplet. His work supporting other innovative minds includes establishing Instructables.com, and co-authoring children’s comic books about building your own gadgets.

Henry is the celebrated founder of CASS, a thriving community organisation for Sydney and Wollongong that offers services and support for people with culturally diverse backgrounds. Having worked in his native Singapore as well as in Australia, he has extensive professional experience in business and project management. Thanks to Henry’s dedication and vision, today more than 2400 families engage with CASS each week.

Moya is a leading legal professional and celebrated champion for women’s sport. She is a Partner at Gilbert+Tobin Lawyers, and a former Vice-Captain of Australian women’s soccer team, the Matildas. Moya has been hailed as “one of the most credible and outspoken voices for change” during her time as Chair for FIFA’s Women’s Football Task Force. She was also named the seventh-most powerful woman in international sport (outside the US), by Forbes magazine.

Though still quite young, Ashik has become a leading authority on Ophthalmic Biophysics, working with the LV Prasad Eye Institute in Hyderabad, India. He has a decade of experience in basic, clinical and translational research in ophthalmology and vision sciences, working with institutes and specialists around the world to find innovative ways to restore vision. Ashik has received several awards for his research on a national and international scale.

A humanitarian and student mentor, Lokesh was recognised for his committed and altruistic work as Co-Chair of the Medical Students’ Aid Project (MSAP), the global health group of the UNSW Medical Society. Lokesh led MSAP’s Gandhi Girls Project to construct 12 new toilets at a girls’ boarding school in rural India, as well as working closely on other international projects as MSAP Treasurer in 2015 and 2016.

This year saw the inaugural presentation of the Chancellor’s Award for Exceptional Alumni Achievement. This was granted to the NSW Premier, the Hon. Gladys Berejiklian MP. Gladys has come to national prominence for her work in banking and public service. As the 45th Premier of NSW, Gladys has shown passion, commitment and resilience.