Secrets of extinct cow with face like a bulldog revealed

An international team of scientists have used the latest genetic and anatomical techniques to study the remains of a cow with a short face like a bulldog that fascinated Charles Darwin when he first saw it in Argentina 180 years ago.

The study, by an Australian and Swiss team including UNSW scientist Dr Laura Wilson, shows the now-extinct cow was a unique breed and – unlike some bulldogs – did not suffer breathing or eating problems because of its peculiar anatomy.

The research, published in the journal Scientific Reports, could help scientists better understand how to protect threatened species.

“Very few people know that hundreds of years ago a cow with a face similar to the shape of a bulldog’s existed, called the niata cow”, says Dr Wilson.

“In our study, we set out to find out more about some of the animal’s anatomical and genetic characteristics. Our principal finding is that the niata was a taurine breed, unique among cattle,” says Professor Sánchez-Villagra, a scientist at the University of Zurich, and co-author of the study.

Charles Darwin saw this strange animal when he visited the Argentinian Pampas and areas around Buenos Aires in the 1840s. He wrote about it and posed questions about its true nature: its anatomy, relationship to other cows, and its functioning, in view of the peculiar shape of its head. The Swiss anatomist Rütimeyer also wrote about the niata in his extensive studies of cattle.

The niata cow is now extinct, but a limited number of skeletons still exist in a few collections around the world. With new tools unavailable to the 19th century researchers, the Australian-Swiss team had the unique chance to study the niata’s anatomy.

“Until this paper, no attempt to use new and useful methods to understand the anatomy and the evolution of this peculiar cow has ever been made. We used genetics, non-invasive imaging and engineering-inspired biomechanical analyses – tools unavailable at Darwin’s time,” says Professor Sánchez-Villagra.

The researchers confirmed Charles Darwin’s suggestion that this extinct kind of cattle is a true breed, with unique cranial features.

“A true breed is a kind which is preserved over time in its features and can be distinguished from other breeds – even if crosses with other breeds do occur,” says Dr Wilson.

“We now also know that the niata was a taurine breed, unique among cattle because of its short snout and underbite – an anatomy that resulted in differences in the way some of the mechanics of feeding operated.”

Specifically, the anatomical analyses showed that although the face of the niata cow was shortened and there was an underbite, the nose regions of the niata were not really impacted by these changes, and the niata, in contrast to extreme cases with some bulldogs, did not suffer problems with breathing.

The researchers also used state-of-the-art computational modelling techniques to see whether the short face affected how well the niata could chew food compared to other cattle, showing that during feeding the niata experienced smaller amounts of stress on its skull bones 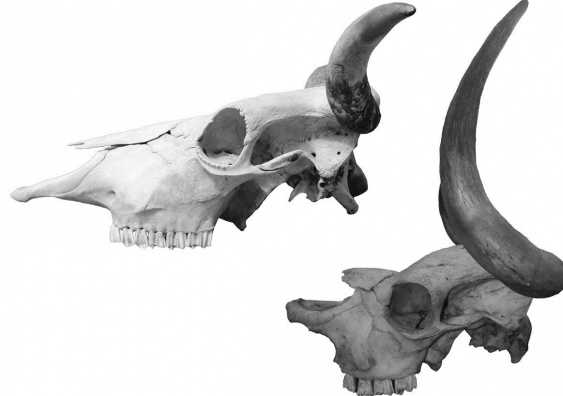 Photo of a modern Simmentaler cow (top) in comparison to the niata cow (bottom). Photographs by Kristof Veitschegger, University of Zurich.

Domestication has resulted in changes to the appearance of many mammals, and a large amount of variation is evident among different breeds, with crosses common, for example, between Australia’s native wild dog, the dingo, and domestic dogs.

“Domestication basically mirrors what we see happening in natural selection, an observation that has fascinated and challenged scientists since Darwin,” says Dr Wilson.

“The niata cow represents an example of extinction of rare breeds. Understanding aspects of its biology allows scientists to better understand how threatened species may be supported.

“While we don’t really do not know why the niata went extinct – detailed studies of its populations over time do not exist – we can make good guesses. We now know that in spite of the singularity of the niata, this cow was able to eat and live like any other cow.

“Its extinction was then not the result of being unfit – instead, its extinction in Argentina occurred in parallel with the intensification of cattle raising and with the search for the optimal breed. This meant that fewer breeds were exploited and many became extinct.”

“This has happened with many species of domesticated animals, which has resulted in a decrease of genetic and morphological diversity in the animals closest to our lives,” Professor Sánchez-Villagra concludes.