UNSW lights up Vivid with art, engineering and ideas

UNSW's contributions to the Vivid festival sparkle with electrical energy, emotion and creativity. 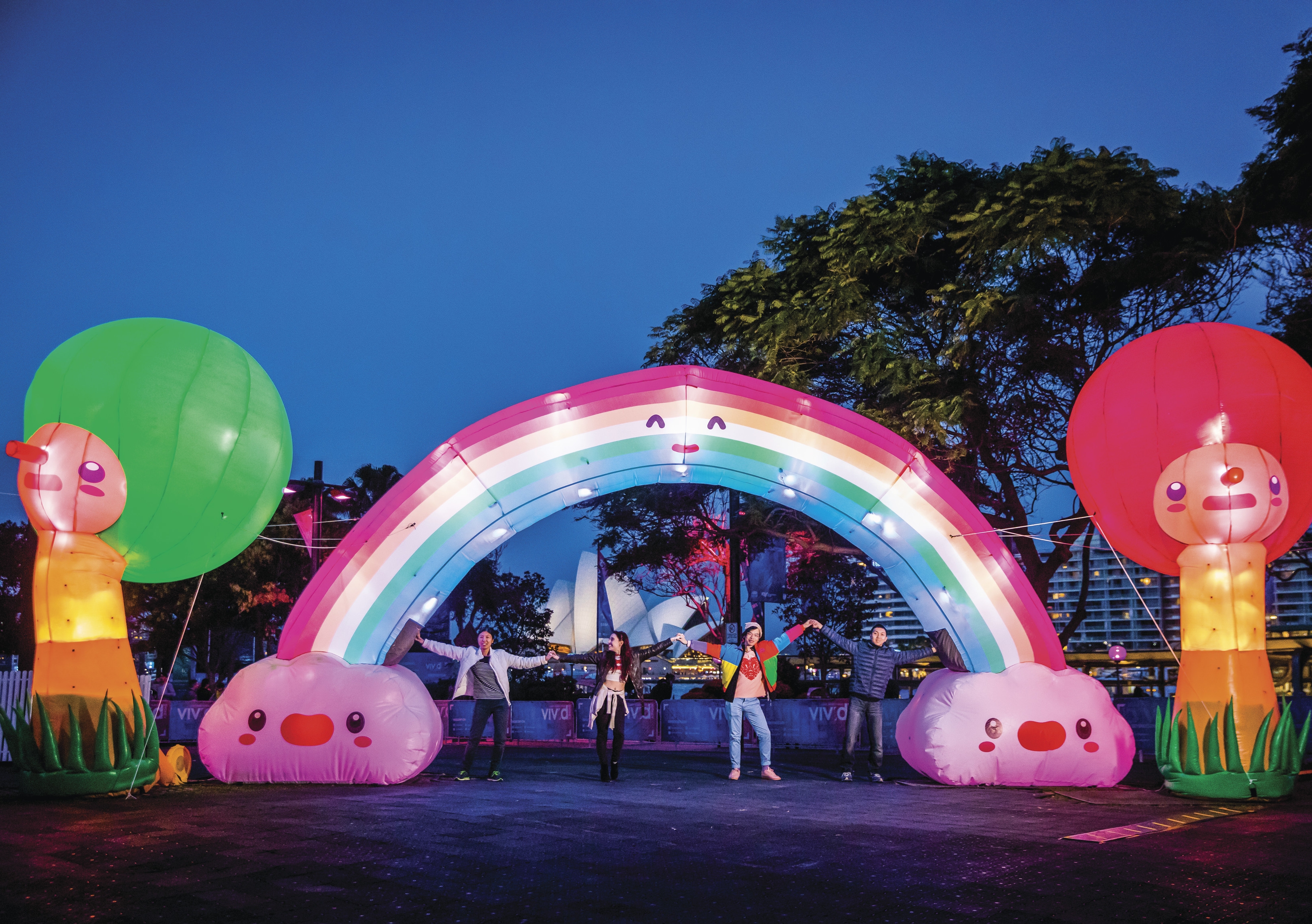 Students, staff and alumni from UNSW have made a colourful contribution to Vivid Sydney 2018.

Among the vibrant installations lighting up Sydney’s Circular Quay are three works by students and staff from UNSW faculties of Art & Design, Engineering and Built Environment, while alumni also feature in the festival’s ideas stream in talks and Q&A sessions.

But it is not only the artist who generates the feeling of harmony. Members of the audience are invited to link hands and form a human chain joining one end of the rainbow to the other. This act of connection rewards the participants by bringing the sculpture to life with sounds, animations and pulsating light.

Chen said his work aims to immerse audiences in a moment of belonging and common humanity.

“My artworks mainly revolve around connection and I've also wanted to do a rainbow for a while because it's so symbolic and universal,” he said.

“The interaction of hand holding to form a human chain was the only interaction that made sense in my head.”

The human/sculpture interfacing works by sending a small electrical current from one side of the rainbow to the other which is activated by the skin of the participants. 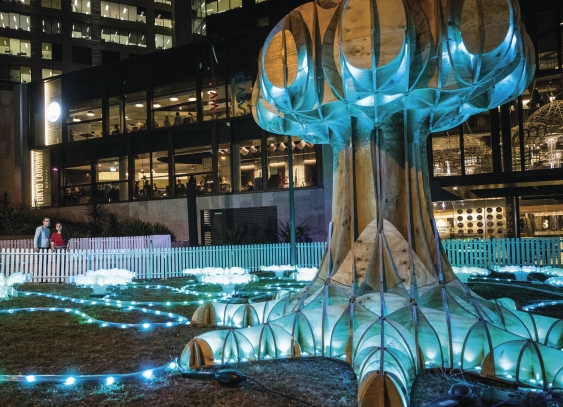 Another of UNSW’s shining lights at Vivid is a dazzling re-creation of a plant biosphere.

The work features a large illuminated tree made of plywood around which radiates similarly styled ferns. Drawing inspiration from mycorrhizal networks where fungi connect and nourish plants, Synergy is another installation in which audience participation is central to appreciating its intended meaning.

As people come into proximity with the ferns, the whole organism reacts. Pulsing light moves along the roots towards the central tree, and the lighting on the ferns begins to dance.

This effect represents the tree and fern as superorganism, where the ferns warn the tree of approaching danger. The artists and engineers also wanted to demonstrate how inconspicuous microorganisms are absorbed into a greater whole and play a key role in the survival of a greater being.

Endangered and extinct animals expressed in light: 'A Little Birdie Told Me' is a collaboration with the Australian Museum. Photo: Destination NSW

Next to the Synergy display at Circular Quay is an installation created by Built Environment computational design lecturer Giulia Conti, titled A Little Birdie Told Me.

Described as a “personal project” by Conti in collaboration with the Australian Museum, the exhibit features illuminated perspex silhouettes of birds representing endangered and extinct species.

“On one side I wanted to express my passion for threatened wildlife and on the other, I liked the idea of a vivid installation that could be enjoyed by everybody (including visually and hearing impaired people),” Conti said.

The birds are made from laser-cut transparent acrylic, LED, arduino units for sound and light which use minimal energy consumption. During the day, they can’t be seen – just like our endangered bird species – but at night they are illuminated in concert with audio of their calls.

The birds depicted represent 133 threatened species in Australia including Regent Honeyeaters, Noisy Scrub-birds and Palm Cockatoos. An additional 22 species have already become extinct – ominously, no sound emanates from these birds in the exhibition.

In Vivid’s ideas program, UNSW Art & Design alumni Soda_Jerk – aka sisters Dan and Dominique Angelero -– will be involved in a Q&A session at Town Hall about their new film Terror Nullius screening at the Sydney Film Festival on Thursday, 7 June.

The film, which has been described as “a rogue remapping of national mythology, where a misogynistic remark is met with the sharp beak of a bird, feminist bike gangs rampage and bicentenary celebrations are ravaged by flesh-eating sheep”, is sure to trigger robust discussion about Australian history and identity.

On the same day at the Museum of Contemporary Art, the fruits of an in-depth quantitative study by UNSW Science of Innovation Lab will be explored in a Vivid Ideas Exchange titled What’s your +AQ? Get yourself and your organisation fit for innovation.

This event looks at the gap between an organisation’s ambition to innovate and the reality of the systems and structures they put in place.

The event hosts suggest the gap between what an organisation says and does can be plugged by Positive Ambiguity (+AQ), where critical attitudinal barriers and enablers are identified in a dynamic scoring system that enables the delivery of innovative ideas.

For more information on the installations and exchange of ideas, visit the Vivid website.