Innovative urban planning by UNSW Built Environment students is on show at the 2018 Venice Architecture Biennale. 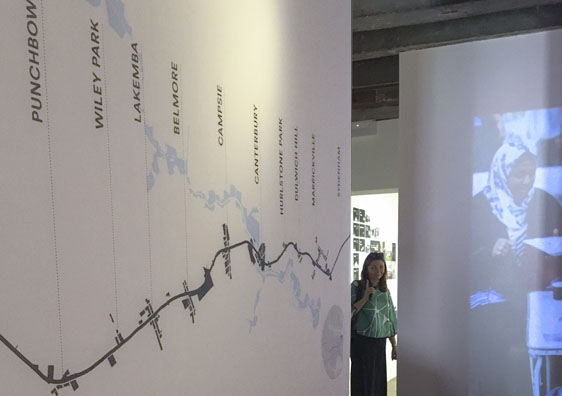 Innovative urban planning designs by an enterprising group of UNSW Built Environment students are on show in the prestigious 2018 Venice Architecture Biennale.

The project, titled Looking for Love on the Sydenham to Bankstown Line features speculative proposals and photographic material as part of a direct response to the NSW Department of Planning’s draft proposal for an urban renewal corridor in Sydney’s inner west.

The exhibition, which combines projects from the Architecture program at UNSW with the Government Architect of NSW, is a bold rethink of urban planning in the face of Sydney’s rapidly expanding population.

The students considered models and planning frameworks that supported design quality, embraced difference and created connections and dialogue between people residing in the 11 inner west community centres identified in the rail corridor.

Jon Jacka, who runs the housing stream in the UNSW Master of Architecture graduate studio, said the Venice exhibition provided an opportunity for the students to promote new urban planning approaches to a broad audience.

“They are responses to the imminent urban transformation and provide alternatives to the ways in which housing and urban development are being rolled out.”

This ‘bottom-up’ approach, which involved exploring the unique cultural and socio-economic diversity of each suburb while harnessing local knowledge, contrasts with the ‘top-down’ one usually associated with private developers whose plans are dictated by profit rather than preserving community vibrancy.

The students also tackled the problem of increasingly unaffordable housing available to Sydneysiders in their submission. This is in stark contrast to the government’s draft proposal.

“There is no affordable housing proposed through the [Department of Planning’s] draft plans,” Jacka said.

“There are no additional green areas. Apartment design and procurement is aimed at investors rather than future residents.”

To address affordability, students looked at alternative housing models overseas for inspiration, such as ‘baugruppen’ (where people come together to develop their own high-density homes), co-housing, housing co-operatives and community land trusts.

“Denmark, France, Germany and others have favourable conditions for renters,” Jacka said.

“Sydney has a lot to gain from studying such examples. The student projects on exhibition provide a glimpse on how such approaches might be realised in our local context.”

If there’s one takeout from the exhibition, Jacka said, it’s that there is hope for Sydney and more broadly, the world, in urban planning.

“Students in architecture hold a privileged position in questioning the status quo and imagining new futures that practice rarely engages with. The role of the student is extremely important in describing what other realities might be possible.”

Following the Biennale in Venice, the students’ work is expected to be on display in the Sydney communities it represents.