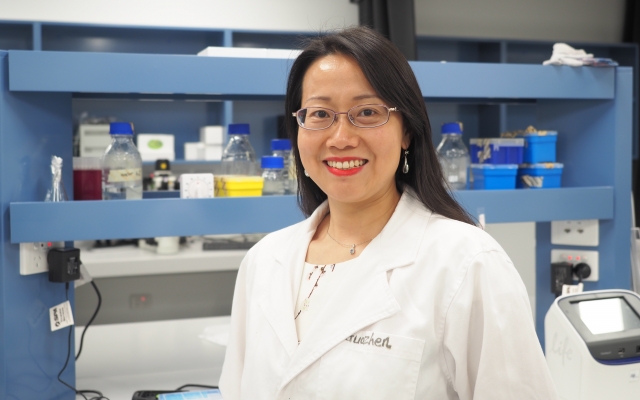 School of Biomedical Engineering senior lecturer Dr Guozhen Liu is at the forefront of a technology breakthrough that brings researchers a step closer to understanding the role of cytokines in mental illness and brain diseases.

Advances made by leading UNSW biomedical engineering researcher Dr Guozhen Liu and her team will allow scientists to detect cytokines in the living brain for the first time.

The results of her research, which was funded by grants from the Australian Research Council, was published recently in the journal, Brain Behavior and Immunity.

Cytokines are proteins secreted by cells that stimulate surrounding cells into specific action and are important to an organism’s immune responses. They also play a central role in controlling mood and cognition and may contribute to a number of brain conditions such as depression, stress, anxiety and even schizophrenia.

Dr Liu, an ARC Future Fellow and senior lecturer at the Graduate School of Biomedical Engineering, is a pioneer in the field of cytokine detection and developed a prototype at Macquarie University in 2015 which enabled cytokines from the animal brain to be detected ex vivo (outside the organism).

“It took about 1.5 years for us to successfully apply this sensor to the animal brain for cytokine detection,” Dr Liu says.

While the prototype was a great leap forward in detection technology, the missing jigsaw piece was the ability to detect cytokines in situ and in real time within the living brain.

But following her work undertaken at UNSW, this has now been achieved.

“In order to realise the real-time in vivo sensing, we have developed molecule imprinting, polymer-based sensors for detection of cytokines,” Dr Liu says.

“Currently this research is being prepared for a patent application at UNSW.”

There is also the possibility that we could apply this technology to as a biomarker detection for early cancer diagnosis.

Working alongside Dr Liu is PhD student Fei Deng who has developed a stainless steel cytokine capture device that is more robust, less prone to breakage and suitable to be adapted to larger animals. All analysis so far has been carried out on rats.

Looking ahead, Dr Liu says the cytokine detection technology is a promising tool in the understanding, diagnosis and clinical treatment of a whole range of health conditions.

“There is also the possibility that we could apply this technology to as a biomarker detection for early cancer diagnosis.”

“At the end of funding, we would expect to have a pre-market sensing device for real-time detection of multiple cytokines simultaneously in a live brain,” Dr Liu says.