Go with the flow: UNSW battery breakthrough showcased to the world 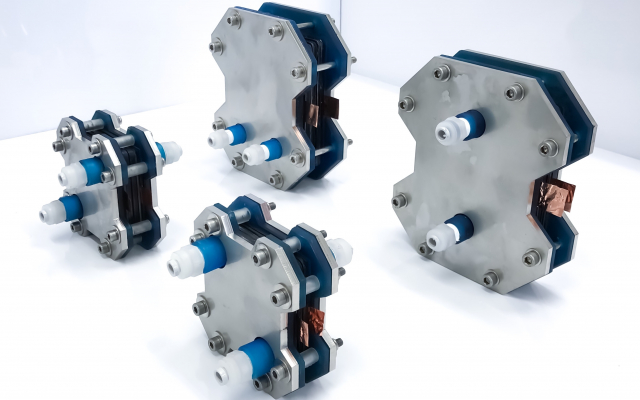 UNSW Engineering is at the threshold of a revolution in vanadium flow battery development that could one day see these safe and long-life electro-chemical energy processors being used in cars.

Dr Menictas will showcase the advances made on the vanadium oxygen redox fuel cell (VOFC) over the last two years and also detail the CENELEST alliance established in 2017– a partnership between UNSW Engineering and the Fraunhofer Institute for Chemical Technology ICT in Germany.

The VOFC work follows on from the pioneering research UNSW Engineering has been conducting since the 1980s on vanadium flow battery systems, which was led by their creator Emeritus Professor Maria Skyllas-Kazacos.

What makes VOFCs a step up from the older prototypes is that they can halve the footprint of a traditional vanadium battery system while also having the capability to double the energy capacity.

And with what is essentially a quadrupling of energy output in a smaller space, the implications for industry and sustainable energy consumption make this a potential game-changer.

“If you can make a system that's more compact and has a higher energy density, it opens applications in different areas,” Dr Menictas says.

“As it’s obviously smaller, you can use it in applications that require higher energy density battery systems, so for example cars, busses and transportation in general.”

Dr Menictas imagines a time not far from now where refuelling of a car would be as convenient and as swift as filling up a car with petrol at a servo today.

Dr Menictas says that the original vanadium battery systems are typically used in stationary installations to provide a source of energy storage for large scale developments.

“There’s a 60 MWh system by Sumitomo Electric Industries operating in Japan,” he says.

“And there’s a massive one due to come online in Dalian, China. It will be the largest battery power station in the world, pumping out 800 MWh of energy.”

Equally as important as sharing this information with the Flow Battery Forum conference is the potential to interest prospective industry players in a partnership to develop the technology further.

The US Office of Naval Research has already been a sponsor of Dr Menictas’ research into VOFCs at UNSW, with work in that two-year project coming to an end in six months’ time.

“We want to achieve two things at the conference,” Dr Menictas says.

“To showcase the work that we're doing on the Vanadium oxygen fuel cell and showcase the new research alliance [CENELEST] that we formed.

“We want people to see that we link with industry, collaborate to solve industry problems, and become a go-to point for researchers and industry around the world.

“Our ethos is: make it accessible and make it applicable to as many different areas as possible. With the high demand and interest in energy, we're at a perfect time in the development of energy systems.”

UNSW Dean of Engineering Mark Hoffman says he is excited to see the University continuing to lead the world with advances in technology that can solve energy challenges facing the planet.

“The contribution by Dr Chris Menictas to stored energy technology has been outstanding,” Dean Hoffman says.

In November this year Dr Menictas will also present at a symposium in Boston titled Redox Active Materials and Flow Cells for Energy Applications. 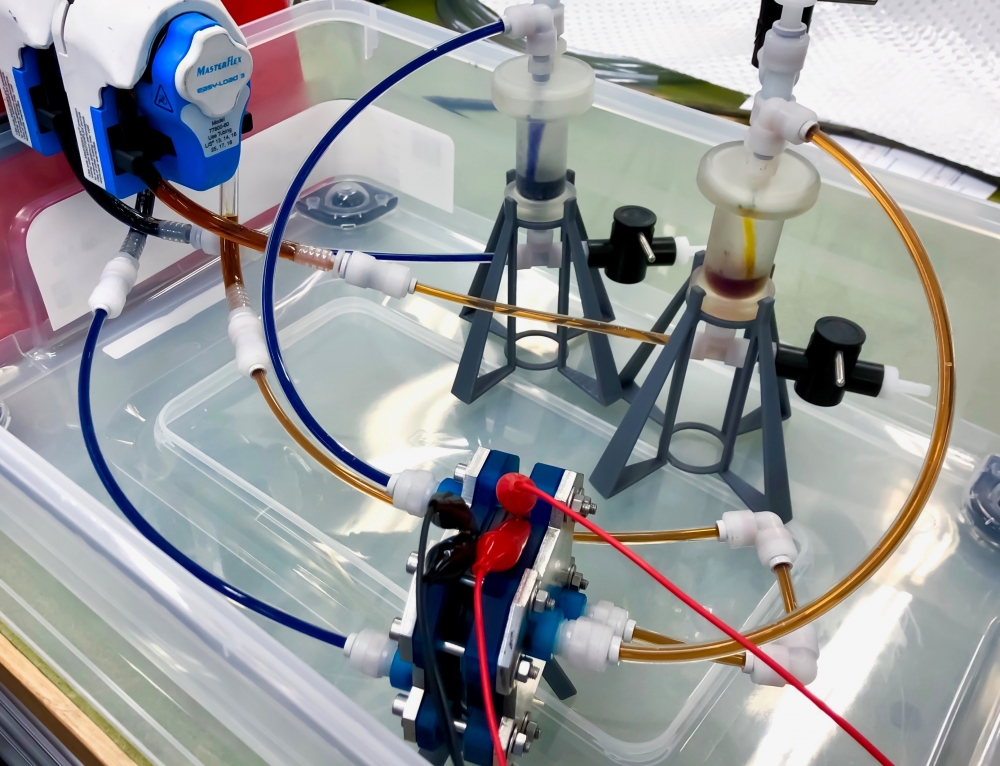 The difference between vanadium battery systems and VOFCs

The main difference between the conventional vanadium battery systems and VOFCs is that the former has two tanks of vanadium while the VOFCs have only one.

The vanadium electrolytes are pumped through battery stacks which generate power through the conversion of the reactive species to different oxidation states. As all reactions occur in the liquid phase, high efficiencies are possible and thermal aspects under high load are well managed. A significant advantage these systems have is that the power output and energy capacity can be independently varied. Additional energy capacity can be achieved by simply increasing the volume of electrolytes.

In the VOFC model, the positive electrolyte is dispensed with entirely, leaving just the one tank of negative vanadium electrolyte with the reduction of oxygen from the air being utilised as the positive process. Put very simply, the same energy production processes are obtained as in the two tank models, giving this battery system a higher concentration of energy.

The advantage of VOFCs is that with reduced size, it enables an opportunity for use in mobile power applications, such as transport vehicles.