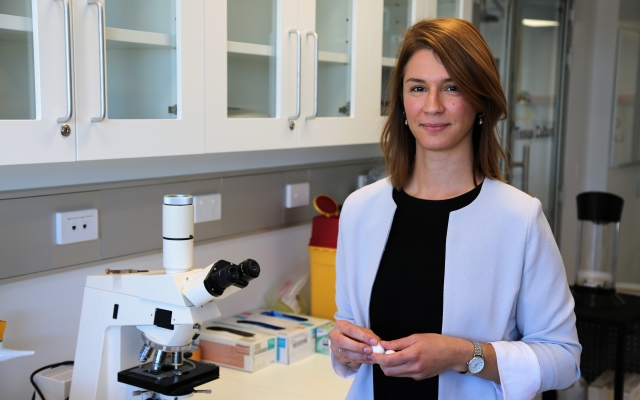 Drawing on her knowledge of silk-based biomaterials, Dr Jelena Rnjak-Kovacina will be using a Heart Foundation Future Leader fellowship to improve technology that could one day repair the hearts of cardiac patients.

Graduate School of Biomedical Engineering researcher Dr Jelena Rnjak-Kovacina has won a Heart Foundation Future Leader fellowship which she will use to perfect the way that cardiac patches are integrated with a damaged human heart.

Worth more than $400,000 over four years, the fellowship will allow Dr Rnjak-Kovacina to understand the physical and biological cues that drive tissue vascularisation – in other words, the extent to which body tissue develops capillaries.

Cardiac patches are comprised of cardiac tissue analogues grown in the lab from biomaterials developed to interface with human hearts.

In theory, they have the potential to be viable long-term alternatives to treating myocardial infarction. But in practice, the effectiveness of cardiac patches is hampered by slow or insufficient vascularisation which may result in cell death and poor patch integration.

“We can now grow human tissue analogues in the lab, so we can take a material like silk, we can isolate cells and then seed them onto the silk,” Dr Rnjak-Kovacina explains.

Following a heart attack or degeneration of tissue due to myocardial infarction, heart cells starved of oxygen eventually die and form scar tissue.

“The idea behind the patch is essentially to replace the bit of the heart that has died with a living tissue that we've grown in the lab,” Dr Rnjak-Kovacina says.

But the jury is still out on how the cardiac patch can be integrated with the heart, and Dr Rnjak-Kovacina is at pains to point out that we are at the very early stages of the study, with such treatment in humans still a good decade away.

“There are many schools of thought about how these would actually get implanted,” she says. “But these are all surgical issues to consider after my research is done.”

There are two parts to Dr Rnjak-Kovacina’s research. The first is finding the best way to promote vascularisation using silk as a kind of scaffolding material to build the tissue around, and the second is to determine the best cells most suitable for the job, with stem cells being the leading contender.

“Over the course of the project we want to develop new biomaterial architectures and test how quickly they vascularise in animal models,” Dr Rnjak-Kovacina says.

“Then at the end of the project we want to take those materials that look promising, combine them with cardiac progenitor stem cells – which are cells that will differentiate into cardiac muscle – and then develop a cardiac patch prototype to test in an animal model.”

Helping Dr Rnjak-Kovacina achieve this goal is Associate Professor James Chong, a cardiologist at the Westmead Institute for Medical Research. A/Professor Chong will be looking at the best type of stem cells to use in the cardiac patch.

“Within stem cells, you have lots of options as well. The most extreme being the embryonic stem cells where there's a lot of safety and ethical concerns,” Dr Rnjak-Kovacina says.

Despite being wary of her research contributing to a false dawn of expectations about cardiac patches, Dr Rnjak-Kovacina looks forward to the next steps after her research is completed.

“I'm very optimistic about this, I very much believe in my field of study,” she says.

“If the research looks promising, I'd definitely like to take it through to large animal models and ultimately follow it into humans, but that’s some years down the track.

“I'm just aware that we're in the early stages of this and that the fundamental research and science is really, really important in order to translate this into clinical successes.”

Dr Jelena Rnjak-Kovacina has held a research position in the Graduate School of Biomedical Engineering since 2014. Prior to this she did her post-doctoral work developing novel silk-based biomaterials for tissue engineering at Tufts University in Boston, USA, from 2011-2013. She completed her Doctor of Philosophy in biomedical engineering at the University of Sydney in 2011.