Opinion: Rethinking Homo Sapiens? The story of our origins gets dizzyingly complicated

You might say it’s the ultimate prize of science, to discover when, where and why humans evolved.

For a long time, the evidence has been overwhelming that Homo sapiens evolved in Africa and later spilled out of the continent to settle the rest of the planet.

But is the story of our origins really as simple as it seems? Published today, a new commentary written by UK and German scientists suggests not.

Too easy, but then…

A few years ago, it seemed all too easy. The matter was settled. Homo sapiens had evolved in the East African rift valley roughly 200,000 years ago and exited the mother continent to settle the remaining planet around 60,000 years ago.

But after decades of thinking we’d made major inroads into solving this ultimate riddle, the story of our origins is starting to get a long overdue overhaul.

A string of recent discoveries has pushed our origins in Africa back to more than 315,000 years ago – and suggested sapiens first exited Africa close to 194,000 years ago making it to southern China soon after, perhaps by 139,000 years ago.

And to add further complexity, this initial “Out-of-Africa” seems to have been followed by one or more later movements, by different sapiens populations, that settled far flung places such as Australia by around 65,000 years ago.

We’ve also begun to find humans whose physical traits don’t fit with our preconceived notions of what sapiens should look like, such as the Iwo Eleru, Nazlet Khater and Red Deer Cave people surviving quite late in various parts of Africa and in Asia.

Could they be hybrids we’ve wondered? Because after decades of scientists locking horns over the issue, geneticists have finally proven that our ancestors mated with the Neanderthals, Denisovans and other archaic humans even in Africa. 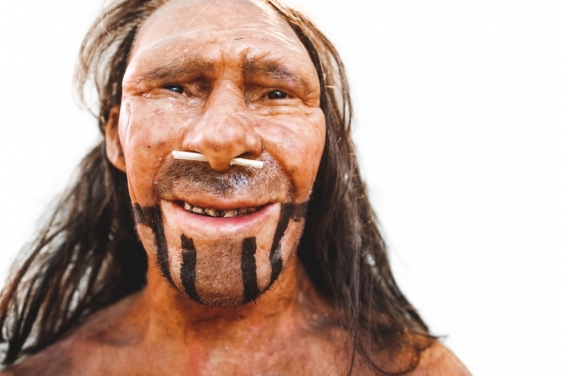 Model of a prehistoric early man at the Trento Museum of Natural History, Italy

Change in the wind

Sure, it’s normal for science to be regularly brought up to date, with new discoveries shifting what we think we know and sometimes even extending knowledge into new places.

But as someone who’s kept a keen eye on developments in, and indeed actively researching, our evolution, it’s clear to me that there’s something’s going on here. Change is in the wind!

So profound is the shift underway in human origins science that it’s seen the unusual step of a team of 23 researchers (led by Eleanor Scerri of the University of Oxford) publish today’s new synthesis of the evidence – and in doing so embrace the emerging picture of complexity and ditch the old simplistic ideas. Among their ranks are archaeologists, anthropologists, geneticists and climate specialists.

It reads like a manifesto, and outlines the major new research directions archaeology should follow to solve our puzzling origins. A key message is that none of these disciplines on their own is capable of doing it and going it alone. That approach only leads to us grasping for simple answers to complex questions.

Big issues on the line

There are number of big issues being wrestled with here. Among the major ones is acknowledgement of the fact that the physical variation that characterises our species around the planet today seems to have emerged only within the period 100,000-40,000 years ago. This has made identifying our ancestors and tracing their evolutionary history exceedingly difficult.

The cranium from Herto in Ethiopia is a great example of a very ancient person who was undoubtedly a member of our species, but who doesn’t really fit neatly into the variation characterising any living group.

How would this occur? It seems that for the first couple of hundred thousand years of our history, our African forebears lived in very small and geographically isolated populations which evolved more or less independently of each other.

At some point one or more of them gave rise to one or more populations of living people, some of whom exited Africa, and with no clear evidence for how this all came about.

This leads us onto another, and perhaps the most important issue of all. How do we define Homo sapiens in the first place? How will this process provide useful criteria for recognising our kind in the African fossil record 200,000, 300,000 or even 400,000 years ago?

The Smithsonian Institution has provided a summary of the major features we use to define our species but sadly many can’t easily be found on the skulls of our early African ancestors.

Does this mean they aren’t our forebears? Not necessarily, just that our current approach is pretty limited and we need to keep in mind that our earliest ancestors would have looked, well, ancestral!

Finally, the complicated links between Ice Age climate change and environmental shifts in Africa acting as key drivers through natural selection and genetic drift are becoming better understood. These forces have shaped how we look and behave and continue to exert their influence over our biology today.

Despite all the progress we’ve made over the last decade in teasing apart our origins, the manifesto of Scerri and her team has more than a hint of “back to the future” about it.

As bold and ambitious as it is, it leaves me with far more questions than answers, and a lingering feeling that the issues are far more complicated than we’ve been prepared to admit until now.