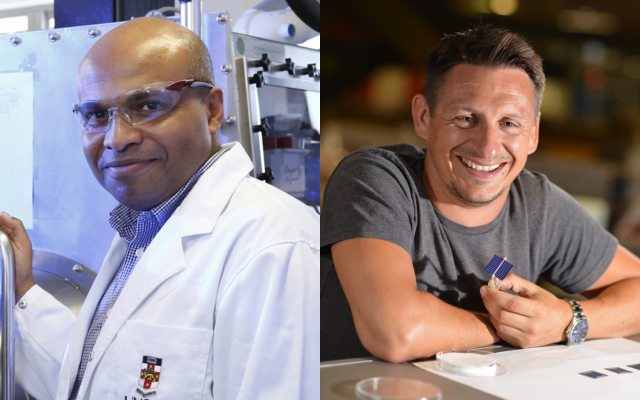 Chemical Engineering’s Associate Professor Kondo-Francois Aguey-Zinsou and SPREE’s Dr Brett Hallam have both been recognised in Engineers Australia’s list of Australia’s Most Innovative Engineers for 2018, as has alumna Anne Williams.

Two UNSW Engineering researchers have made the list of Australia’s Most Innovative Engineers 2018, as published in the July issue of create, Engineers Australia's magazine.

Associate Professor Kondo-Francois Aguey-Zinsou of the School of Chemical Engineering was recognised for his groundbreaking work in powering everyday products with an alternative energy source while Dr Brett Hallam of the School of Photovoltaic & Renewable Energy Engineering was given the nod for significantly bringing down the costs of solar cells while improving output.

Co-incidentally, common to both researchers’ work is the exploitation of the universe’s most abundant element, hydrogen.

A/Professor Aguey-Zinsou had already shown that hydrogen power was a serious alternative to conventional energy sources by proving it could be used as a low temperature, low pressure, reversible, high capacity source of energy.

But frustrated by the tendency of media and industry to refer to it as ‘fuel for the future’, A/Professor Aguey-Zinsou went ahead to prove that hydrogen fuel and its application in everyday life is very much a part of the here and now.

He designed a hydrogen fuel powered bike – an adaptation of an electric bicycle, called the Hy-cycle, which extended the standard 30 km distance of the electric battery by a whopping 120 km further. On top of that, the hydrogen canister that powers the bike can be recharged in half and hour, compared with six hours for the battery.

The hydrogen canister can also be used interchangeably with other consumer products, A/Professor Aguey-Zinsou showed, and he and his team designed a portable hydrogen barbecue which provides five hours of flameless cooking and costs just $300. 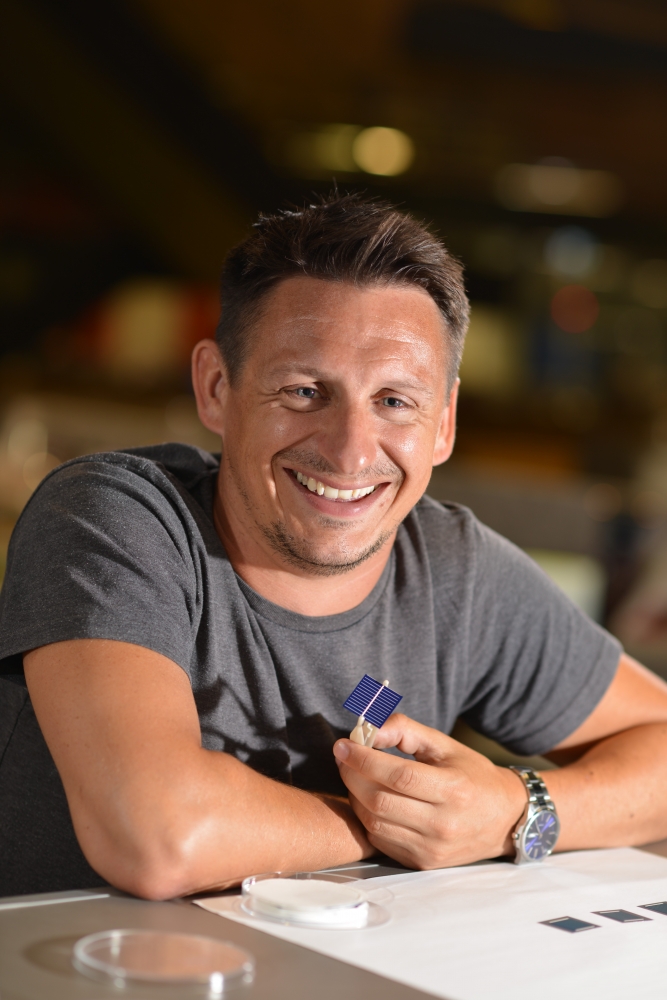 For Dr Hallam, hydrogen and the way that it interacted within solar cells was a puzzle that needed to be solved to improve efficiency of the cells and continue reducing their cost.

The challenge facing Dr Hallam and his team was that highly-efficient solar cells need heterojunctions – an interface between the crystalline silicon semi-conductor and another material such as a thin film of amorphous silicon – to minimise surface recombination. The problem was, for this to remain efficient, expensive, high quality silicon was needed.

If low quality, low cost silicon could be used while maintaining the cell’s high efficiency levels, it would mean the solar cells would be more commercially viable. But an obstacle to achieving this was that heterojunctions are unstable and processed at low temperatures, which meant that the passage of hydrogen through the solar cell during fabrication was excruciatingly slow.

So Dr Hallam found a way to enable hydrogen to be injected at an extremely high temperature before heterojunction formation in a process known as hydrogenation, followed by low temperature hydrogen activation to neutralise defects in the finished device.

The upshot was that a record VOC (open circuit voltage) of 702 mV was obtained using low-quality, low-cost multi-crystalline silicon. This represents a gain of 30 mV over record devices fabricated using multi-crystalline silicon. Tests also suggest that the hydrogenation processes could lead to cells with VOC output as high as 730 mV using low-quality silicon, increasing efficiencies by up to 25 per cent, representing potential industry savings of $US13 billion a year.

“I am honoured to be named in the list alongside other engineers doing such amazing things in Australia,” Dr Hallam says.

“Right now, I'm working towards making this technology a commercial reality and looking for what might come next.”

The listing in Australia’s Most Innovative Engineers this year follows on from another award for Dr Hallam who was recently named in Renewable Energy World’s 40 Under 40 list for young achievers in the solar energy industry.

“I’m very proud of Francois and Brett. Making it into such a list is no mean feat and reflects UNSW Engineering’s focus on innovation to make energy consumption sustainable and affordable for both industry and consumers.

“Francois and Brett fully deserve the recognition of being leaders in their fields.”

UNSW Engineering alumna Anne Williams was also included in the list for her work designing poles to carry the overhead high voltage wires along train lines.

Ms Williams designed a steel HV aerial pole resilient against stray traction current issues that plague traditional timber poles. Her poles were used in a stretch of track between Hornsby and Strathfield as part of a power upgrade by Novo Rail Alliance.