Champions of Indigenous recognition to feature in Mason Conversation

Patricia Anderson and Megan Davis, who helped shape the historic Uluru Statement from the Heart, will feature in the 2018 Mason Conversation at UNSW Sydney. 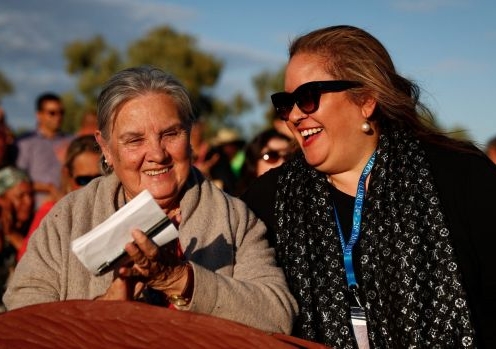 Two prominent Aboriginal women who led the unique process that culminated in the historic Uluru Statement from the Heart will take part in the second Mason Conversation at UNSW on August 16.

Patricia Anderson AO and Professor Megan Davis shared the leadership of the deliberative Regional Dialogues and First Nations Constitutional Convention which resulted in the Statement.

Associate Professor Sean Brennan, Director of the Gilbert + Tobin Centre of Public Law which is co-hosting the event with UNSW Law, said the Statement “transformed the debate in Australia over constitutional recognition”.

“The 2018 Mason Conversation is the opportunity to hear from these two inspiring Aboriginal women from different generations and backgrounds, about this landmark process in Australian law and politics, and the personal journey that brought them to be involved in the campaign for structural change,” Associate Professor Brennan said.

Professor Davis is the Pro Vice-Chancellor Indigenous at UNSW.

She was raised in Queensland by a mother with a love of literature and a zealous commitment to education.

Professor Davis has emerged as a national and international leader for Indigenous peoples, most recently as an elected member of the UN Human Rights Council's Expert Mechanism on the Rights of Indigenous peoples and a Referendum Council member.

“Megan Davis is a lawyer and public intellectual known nationally and internationally for her leadership in the field of Indigenous peoples and their rights,” Associate Professor Brennan said.

“The role she played with Pat in leading the consultation process through to Uluru drew on years of involvement as a United Nations expert overseas and as a major player in constitutional law debates here in Australia.“

Patricia Anderson grew up with her family in Parap camp in Darwin.

After more than 50 years of working life spent mainly in Aboriginal health and education, Ms Anderson brought her leadership skills and personal commitment to the cause of constitutional and structural change by agreeing to co-chair the Referendum Council appointed by the Prime Minister and Leader of the Opposition in December 2015.

She is the presently the Chairperson of the Lowitja Institute, Australia’s National Institute for Aboriginal and Torres Strait Islander Health Research.

“With her pioneering contributions over decades in Aboriginal health and education, Pat Anderson has been a fighter for her people all her working life,” Associate Professor Brennan said.

“We are honoured to have her at UNSW soon after she was presented with the 2018 NAIDOC Lifetime Achievement Award.”

The conversational nature of the event allows for unique insights into the people behind processes at the highest level of politics and government in Australia.

Professor George Williams AO, Dean of UNSW Law, will lead off the conversation with Ms Anderson and Professor Davis before opportunities for questions from the audience.

The Mason Conversation series is named in honour of Sir Anthony Mason and his decades-long contributions to UNSW, UNSW Law and the public law community.

As well as a distinguished career in the law, including as Chief Justice of the High Court of Australia (1987-95), Sir Anthony was the fifth Chancellor of the University of NSW  between 1994 and 1999 and the inaugural Chair of the Advisory Committee to the Gilbert + Tobin Centre of Public Law.

Sir Anthony was the first speaker for the inaugural Mason Conversation in 2016.

What: The 2018 Mason Conversation