In an overview of 32 years of annually-assessed student opinions, belief among students that a god is the ultimate or contributing cause of human origins has steeply declined from being a majority view in 1986 to being a small minority view in 2017. Conversely, conviction that humans evolved without divine involvement of any kind rose steeply over the same period to become the dominant view among students.

Every year since 1986, the researchers polled first-year biology students at UNSW Sydney about their views on evolution and creationism. In 1986, 60% of students believed a god had something to do with the origin of humans, while only 29% held this view in 2017. In contrast, the percentage of students convinced that a god had nothing to do with the origin of humans increased from 25% in 1986 to 62% in 2017.

The findings – published today in Evolution: Education and Outreach – are the longest continuous annual survey of opinions about creationism versus evolution among first-year university students world-wide.

Professor Michael Archer, lead study author and Professor at UNSW Science’s School of Biological, Earth & Environmental Sciences, says the original intent of the poll was to assess the level of commitment among incoming students to supernatural explanations for our origins.

“Given that the creationist view (that humans were created by God within the last 10,000 years, rather than evolved naturally over millions of years without the involvement of God) is common among American students, we wanted to know how much of a challenge introducing the evidence for evolution to first-year students would be for us in Australia,” Archer says.

“We also wanted to know if Australian student views about this key issue were changing over time.”

From 1986 to 2017, every student attending the first-year biology course was invited to complete a one-item poll on a strictly anonymous basis. An average of 530 students a year participated in the survey. The results of the relevant year’s survey – and of all previous years – were always openly presented to the class in the following lecture.

Each student was handed a slip of paper and asked to circle one of the following four options, the one with which they most agreed:

Analysing the survey results from the 32 years (Fig. 1a), the researchers identified two main findings.

“First, the percentage of our Australian students endorsing the creationist option (the first one of the four) has been consistently small, averaging 10.4%, and slowly declining to less than 5%,” Professor Archer says.

“Second, there has been a striking cross-over in the opinions of the successive cohorts of students. In 1986, 60% of the students endorsed either the creationist option or the theistic, god-guided evolution option (the second of the four above). By 2017, the proportion of students endorsing either of these theistic options had fallen to 28.8%.

Reports of long-term trends in views about the origins of humans are rare and, in most cases, limited to surveys of adult populations in the USA and, more rarely, other areas of the world.

The extent and pace of decline in the Australian students' commitment to religious views about divine creation, especially creationism, is in distinct contrast to the corresponding beliefs among American students and the American public.

“In the USA, belief in creationism, while slowly declining, appears to have remained in the 40% range, four times that seen in our Australian survey,” Professor Archer says.

The fact that commitment among Australian students to this view, the only one that involves refusal to accept evidence that humans have evolved from other animals, has always been low—and declining, suggested to Archer’s team that no extra effort was needed to communicate to first year students the scientific evidence for human evolution.

The team has proposed additional strategies to better understand these long-term changes in student viewpoints. “There may be value in running a similar annual survey in some of the high schools that contribute to a majority of the incoming students to this university,” Archer says.

“Slight changes to the national census questionnaire to enable a more detailed assessment of long-term changes in public opinions about these issues would be valuable, too, although already it is clear (Fig. 1b) that a steep decline in religious commitment has been occurring in the general public as well.”

The authors also suggest that to assess the potential impact of university education on the opinions expressed by students, it might be useful to run the same survey with as many as possible of the same cohort of students over their next three years of their undergraduate education. 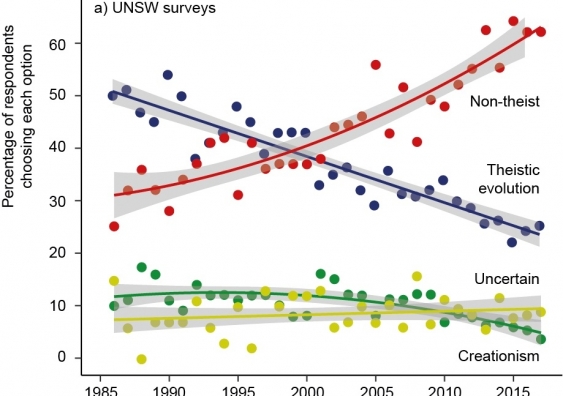 The top figure shows the percentage of students who, between 1986 and 2017, choose one of four options in relation to the human evolution: (1) humans were created by God within the last 10,000 years (green); (2) humans evolved over millions of years with the whole process guided by God (blue); (3) humans evolved over millions of years but God had no part in this process (red); or (4) they are uncertain what they think (yellow). Figures include lines of best fit from linear and quadratic regressions with 95% confidence intervals.

The bottom figure shows the percentage of the wider Australian public who have declared in national censuses between the years 1986 and 2016 that they have no religion.