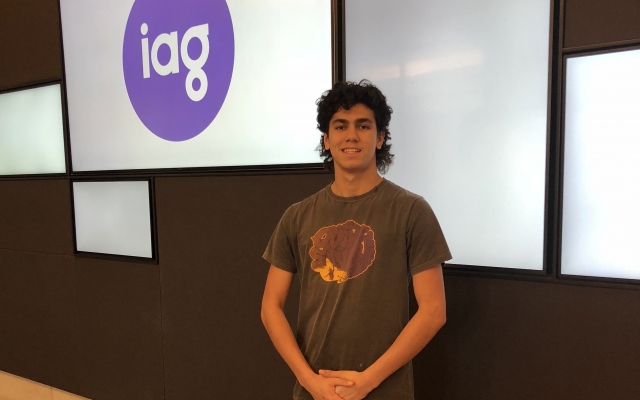 First-year Software Engineering student Jaiki Pitt is a young Indigenous man who identifies as part of the Meriam people from the Cape York Peninsula and the Wuthati people of the Torres Strait Islands.

Like most year 12 students, by the time he finished high school he was thinking ‘What next?’ and on the glowing recommendation of his sister decided to check out the CareerTrackers Indigenous Internship Program.

Jaiki joined up and undertook his first paid internship just prior to starting his degree. Now, a year or so into the journey, he is incredibly enthusiastic about the opportunities it’s given him. He says it’s completely shifted the way he thinks about himself and his future career prospects.

“Growing up as an Indigenous person, there isn’t really a high expectation on you. When I was younger and thinking about my future life and career prospects, I certainly didn’t imagine I’d ever be able to join the corporate world in a professional role,” explains Jaiki.

“But when I joined CareerTrackers and saw all these other really smart Indigenous interns working in corporations, wearing suits and being professional, I found my perception of who I was, who I could be and what I could do broadening.”

Leveraging the 45-year legacy of the INROADS program, which works to increase ethnically diverse employees in corporate management in the United States (of which CareerTrackers CEO Michael Combs is an alumnus), the not-for-profit organisation has adapted this model to address Indigenous disadvantage throughout Australia.

When I joined CareerTrackers and saw all these other really smart Indigenous interns working in corporations, wearing suits and being professional, I found my perception of who I was, who I could be and what I could do broadening.

According to Abbey Wright, one of CareerTrackers’ Student Advisors, on-the-job experience is a key feature of the program and her role is to support students and link them with private sector employers for paid multi-year internships. Students perform their internship with a sponsoring company with the aim of becoming a full-time employee when they complete their degree.

“As soon as a student joins the program they are assigned an advisor, and this advisor will be their main point of contact throughout the program, helping them prepare for success during internships,” says Abbey, who herself proudly identifies with the Kamilaroi nation which lies between northern NSW and southern Queensland.

“The positive change we see in students is often quite profound. I’ve had the privilege of being Jaiki’s advisor since he started the program and have seen his confidence increase considerably in just a year,” she says.

Jaiki’s sponsoring company is the insurance giant IAG and he has already completed two internships, working first in their retail web team and, most recently, in their mobile team where he learned how to build mobile apps.

“Working for IAG has really boosting my knowledge about software engineering, which is great, but the best part about interning is the confidence it brings. I’m now able to see myself out there working in industry in the future. A real-world job is a little less mystifying than it was before,” he says.

“Our Leadership Development Institute is the largest gathering of Indigenous Australian students and young professionals in the country and something we are very proud of. Here, we can expose students to influential Indigenous leaders who come together to talk about their personal experiences of incorporating their culture with their profession,” continues Abbey.

“This is where our students can connect with each other, where they can connect and form mentorship relationships with our alumni and how we strengthen our whole community.”

This sense of connection with others is one of the unexpected benefits of CareerTrackers for Jaiki who says meeting other interns and making friends with so many other Indigenous students has been a definite highlight.

The overall success of CareerTrackers has recently been quantified in the CareerTrackers Advantage report that details how alumni are doing outside of the program. The figures are quite arresting.

For example, 89% of CareerTrackers alumni make it to graduation compared with 47% of Indigenous Australian students who don’t do the program. Another is that 95% of CareerTrackers find full-time employment within three months of graduating compared to 69% of Australian university graduates who secure full-time employment within four months of graduating.

Abbey’s favourite statistic, however, is about income. “The median weekly income for Indigenous Australians is $441, for average Australians it’s $662, but for CareerTrackers it’s $1,192. These statistics really speak for themselves,” she says.

Jaiki says he would definitely recommend CareerTrackers to other Indigenous students as a valuable way to connect with other people, to enhance their job prospects and also to address the inequalities that Indigenous people still face in Australia.

“CareerTrackers helps young Indigenous kids believe in themselves and believe that they can be better,” he says. “This is exactly what Australia needs right now.”