The researchers' vision is for direct communication between a wired brain and an external device, an achievement that could revolutionise health care, entertainment and the way humans interact with their environments. 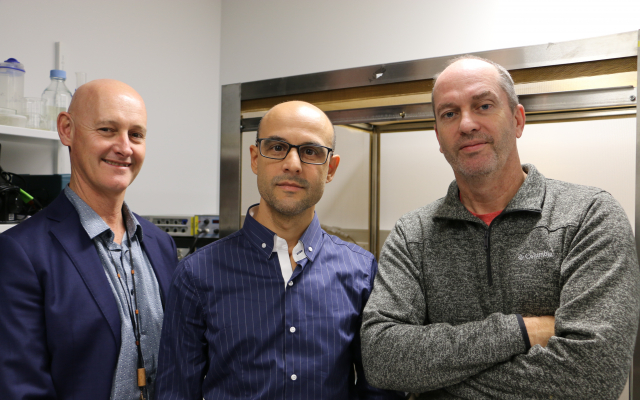 The researchers' vision is for direct communication between a wired brain and an external device, an achievement that could revolutionise health care, entertainment and the way humans interact with their environments.

UNSW Sydney Engineering researchers have been awarded a US Naval Research grant to advance the development of chips to read neural activity from the brain, which could lead to the creation of a brain-machine interface to restore lost functions in people with a disability.

Dr Leonardo Silvestri and Professors Francois Ladouceur and Nigel Lovell from UNSW Engineering were awarded the US$359,000 (AU$490,215) grant to continue their research in neural interfacing, which refers to a direct communication pathway between a wired brain and an external device. The ultimate goal is to enable two-way communication between the brain and a machine – for example an artificial limb or a computer. The team invented the first chip that uses fibre optics technology to measure signals from the brain and convert them to an image that can be read.

Dr Silvestri said: “We’ve developed optrodes – pixel-like sensors on a chip – that pick up electrical signals when placed on brain tissue. At the back of the chip are optical fibres that measure this brain activity and translate it into a visual image. This is the information we can interpret and use to control a connected device, which could have potential applications in numerous fields.”

“What we are building is a chip with a million electrodes, with a small bundle of thin, lightweight glass fibs going from the brain to a small device in your pocket, from where it can transmit wirelessly. Our solution is far easier to scale than those using traditional wiring and it’s also less susceptible to interference – so when instructing a machine we can be much more precise. This will be especially valuable for medical applications,” Dr Silvestri added.

While health care is an obvious field to benefit from these developments, other areas that could take advantage of collecting and understanding brain signals include workplace safety, ‘smart’ home or office environments, marketing research, authentication and security, and entertainment.

Professor Ladouceur believes the team’s invention will be a life-changer for millions of people.

“This is going to be bigger than quantum computing, because it will affect humans and significantly improve their quality of life by enhancing human abilities across a number of fields,” Professor Ladouceur said.

“We are a few years away from having someone control their own prosthetic limb or preventing an epileptic seizure.  We still need to address challenges in scalability – by developing a denser chip that is capable of transmitting sufficient electrical signals from the brain to make it possible to accurately control a machine.  We also need to ensure biocompatibility – which means ensuring there will be no adverse effects when implanted into humans. But these are perfect engineering challenges, which we will overcome.”

Dean of UNSW Engineering, Professor Mark Hoffman said: “We live in the most exciting time ever to be an engineer. This team from UNSW Engineering, working at the exciting interface of brain and machine, has created an exceptional piece of technology and we are extremely grateful to US Naval Research for backing them to take their invention through to its next stage of development.”