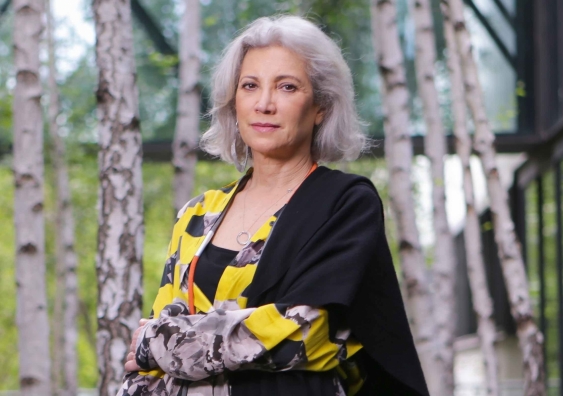 It’s been a driving force behind the work of Carme Pinós for decades - the desire for architecture to inspire connections with nature and humanity.

Whenever she can, the celebrated Spanish architect designs spaces where she hopes people will be able to identify as part of a community, but also feel they belong to what she calls universality.

Pinós applied her philosophy when she designed this year’s MPavilion, an open-space public structure commissioned every year in Melbourne. 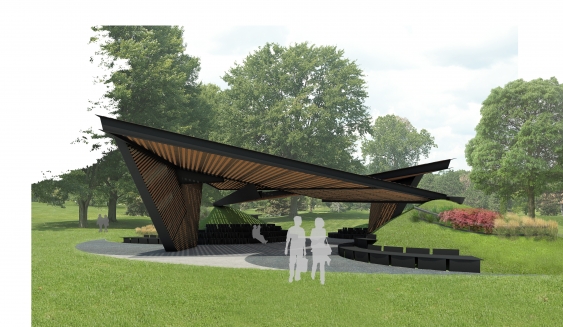 Pinós is esteemed in her field. Since setting up her studio Estudio Carme Pinós 27 years ago, urban and public projects around the world carry her stamp.

Her style has been described as a “sharp approach to design” underpinned by a “constant focus on experimentation and research”.

The decorated Barcelona-based architect travels the world, teaching and lecturing on her profession and her work, as well as continuing to be engaged in design.

She is in Australia for the launch of MPavilion 2018, the fifth such project since the inception of the architectural commission and design event.

Every year, a new pavilion, designed by a leading international architect, is temporarily erected in Melbourne’s Queen Victoria Gardens.

For five months from October, the structure is host to talks, workshops, performances and installations. Come February, each MPavilion is gifted to the City of Melbourne and moved to a permanent new home.

The concept was conceived by the Naomi Milgrom Foundation, which aims to enrich Australian cultural life by engaging audiences with exceptional art, design and architecture. 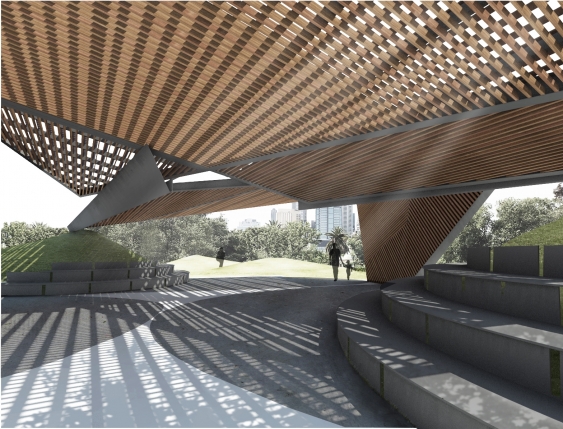 While in the country, Pinós will also deliver the fourth UNSW Utzon Lecture for 2018, expanding on the philosophy behind her work and her MPavilion design.

Pinós says MPavilion 2018 is “a place for people to experience with all their senses - to establish a relationship with nature, but also a space for social activities and connections.

“The pavilion establishes a relationship with nature and the surrounding park, where we will feel the sun’s path through the game of shadows created by the pavilion’s skin, and where on rainy days we see the water run through its transparent roofing,” she says.

“Like an origami folding, two surfaces of timber latticework bend and intersect with themselves to form a roof. Between the latticework, a transparent layer of polycarbonate protects us from the rain.”

An altered topography forms three mounds that incorporate tiered seating and create the atmosphere of cover.

“From the tiered seating, we enjoy the social activities offered by the foundation, never losing sight of the fact that we are in the middle of a magnificent park,” she says.

“We will be inside the pavilion, but always feeling as if we are also on a balcony facing nature and connecting with the surrounding community.”

What: Utzon Lecture: Carme Pinós on the design of MPavilion 2018

Bio: Carme Pinós is renowned worldwide for designing architecture that exhibits a deep commitment to the specifics of a given project site, its local and regional identity, and to the experience of the individual visitor or inhabitant. Her work spans large urban developments, social housing and public works, and represents a deeply humanist approach to architecture and to city making.

About the Utzon Lecture Series: The Utzon Lecture Series was launched in 2010 by Jan Utzon, son of renowned Danish architect Jørn Utzon. Held at UNSW, the series focuses on ideas from leading contributors of international significance in the design, delivery and management of the built environment