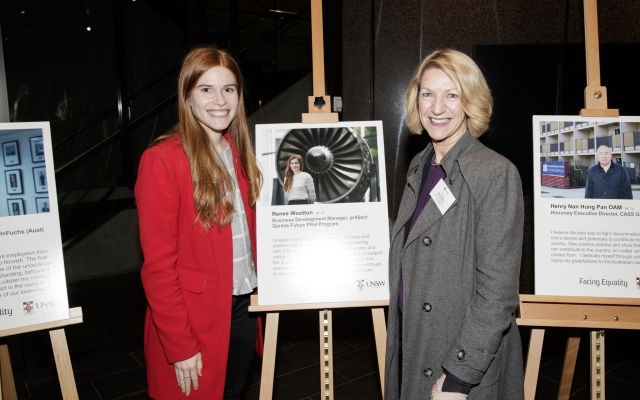 Alumni, staff and students gathered at the Tyree Energy Technologies Building to celebrate the launch of the UNSW Engineering Facing Equality portrait series.

The project, part of UNSW’s Grand Challenges Program, is designed to challenge our notions of equality by combining photographic portraits with personal reflections from a diverse range of alumni and members of the UNSW community.

The core focus of the evening was on implicit bias. Implicit, not just explicit, forms of bias are a major obstacle to the achievement of equality in Australia today. However, social psychologists have shown that mere exposure to images of successful individuals from diverse backgrounds can help shift expressions of implicit bias.

The exhibition features portraits of 13 esteemed Engineering alumni who, through their actions and success, are powerful ambassadors to address the challenge of inequality. The series showcases a broad range of role models and thought leaders from diverse backgrounds. This included the first female Muslim Senator to a community leader who established the development of support services for the Chinese migrant community.

UNSW Dean of Engineering, Professor Mark Hoffman, said the exhibition showed that what the university valued most were its students.

“We see in them just one thing – potential. A potential that is natural outworking of their gender, sexuality, race, religion and life experience,” Professor Hoffman said.

“In the past, society hid from these things – now we celebrate and embrace them because creativity is based in bringing your full self to every situation you may be in.”

Renee Wootton, a Mechanical Engineering graduate from 2016, a Tharawal woman and one of the exhibition participants said the first step in achieving equality is more diversity in areas where key decisions are made about how the world is going to be designed and engineered.

“There is a clear lack of female and indigenous representation within Australia in the engineering field, and this is important because it impacts the world around us,” said Renee.

“90% of the world is designed by men. Imagine what it would look like if it were the other way around or even 50/50.”

A similar photographic series has been launched at UNSW Law and UNSW Arts and Social Sciences and is planned for roll-out across all Faculties as part of the Grand Challenge on Inequality.

The photos can be seen on the ground floor of the Ainsworth Building at UNSW Kensington campus, where they will be on permanent display.