How a change in climate wiped out the 'Siberian unicorn'

A mysterious shaggy giant species of rhinoceros – named the Siberian unicorn due to its enormous single horn – turns out to have survived in western Russia until just 36,000 years ago, according to research published today in Nature Ecology & Evolution. This extinction date means that the Siberian unicorn’s final days were shared with early modern humans and Neanderthals.

Previously, little was known about the creature thought to have become extinct more than 200,000 years ago. But genetic analysis and radiocarbon dating have begun to reveal many aspects of how it lived, and when it died out.

A key finding is that the Siberian unicorn did not become extinct due to modern human hunting, nor even the peak of the last Ice Age starting around 25,000 years ago.

Instead, it succumbed to a more subtle change in climate that reduced grassland from eastern Europe to China.

Our new results show that the Siberian unicorn was reliant on these grasslands and, unlike other species in the area such as the saiga antelope, was unable to adapt to change.

The Siberian unicorn (Elasmotherium) had a single large horn, estimated at up to a metre in length. It was one of many diverse rhino species that once existed.

The loss of the Siberian unicorn provides a valuable case study displaying the poor resilience of rhinos to environmental change.

The animal we worked on was found in modern-day Russia, though its range also extended to areas that now include Kazakhstan, Mongolia, and northern China, where it inhabited a steppe-like habitat dominated by grasses and herbs.

The Siberian unicorn shared this environment with the saiga antelope, and other Ice Age species including the woolly rhino and mammoth.

So why did the Siberian unicorn become extinct while other species that lived in the same habitat held on for thousands of years longer or, like the saiga, still survive today? 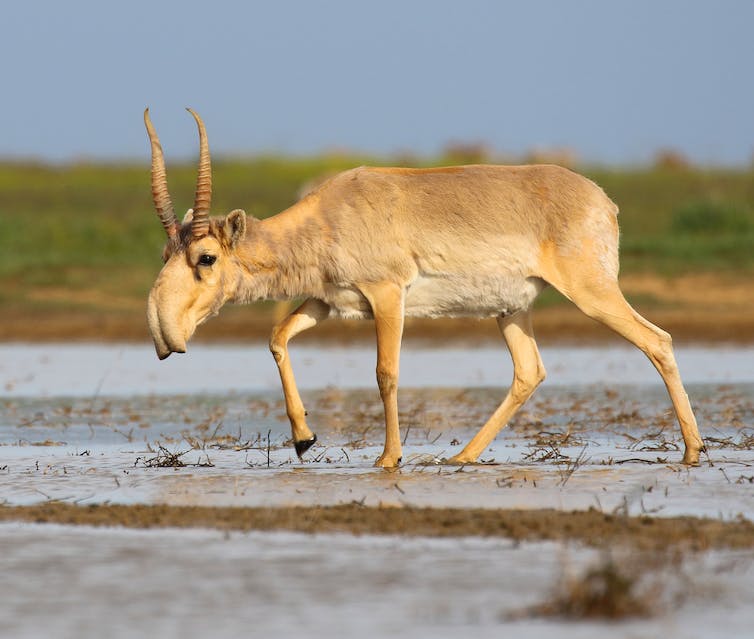 A few unconfirmed pieces of evidence have recently suggested that the Siberian unicorn survived until closer to the present, much like the woolly rhinoceros. So we surveyed the age of 23 bone samples of the animal held in museum collections in Russia and the UK.

Rather than 200,000 years, new dating found the Siberian unicorn actually became extinct as recently as just 36,000 years ago.

Next we considered how it might have become extinct at this time.

But this date does match the timing of a pronounced change towards cooler summers across Northern Europe and Asia. This seasonal change resulted in grasses and herbs becoming more sparse, and an increase in tundra plant species such as mosses and lichens.

So why did a change in climate 36,000 years ago drive the Siberian unicorn extinct, but not the woolly rhinoceros or the saiga?

To answer this question, our study took fossil bones from the Siberian unicorn, woolly rhino, and saiga, and looked at the nitrogen and carbon they contained – as differences in these elements reflect an animal’s diet.

We found that before 36,000 years ago the saiga and the Siberian unicorn behaved very similarly, eating grass almost exclusively. After this point, the carbon and nitrogen in saiga bones showed a major dietary shift towards other plant types.

But shifting from a grass diet proved too difficult for the Siberian unicorn, with its special folded wear-resistant teeth and a low-slung head right at grass height. Relatives such as the woolly rhino had always eaten a more balanced array of plants, and were much less impacted by a change in habitat.

Importantly, the change in climate that drove the Siberian unicorn extinct was actually much less pronounced than those which occurred during the Ice Age that followed. Or the changes that we will face in the near future.

The story of the Siberian unicorn is a timely reminder that even subtle changes in plant distributions can have devastating knock-on effects for large animal species.

Worryingly, this is a dire risk for many animals, such as the Siberian unicorn’s surviving cousins, which thanks to humans already have heavily restricted ranges.