Scientists have shed light on tropical tree deaths – with results predicted to have important implications for managing forest biodiversity. 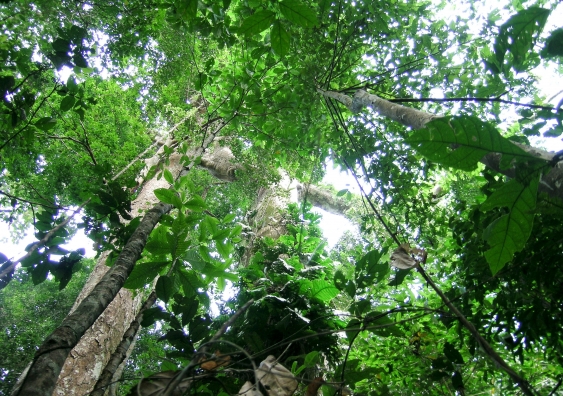 A study by scientists at UNSW Sydney, Macquarie University, data61 and the Smithsonian Tropical Research Institute has shown why some tropical tree species die and others survive, revealing new insights into the processes governing tree death in tropical forests.

The findings will be crucial to predicting how the biodiversity of forests will change in the future – the researchers’ approach could be used to improve any type of forest management, as well as help highlight the effects of climate change on forests.

The work was led by Dr James Camac from the Centre of Excellence for Biosecurity Risk Analysis (CEBRA) and was published this month in Proceedings of the National Academy of Sciences (PNAS).

The team analysed data from over 180,000 trees across 203 species in a Panama tropical forest to estimate different causes of tree death, and account for the huge variation among tree species. They applied a new statistical approach that simultaneously estimates a tree's likelihood of dying from two causes of death: death due to slow growth (e.g. ‘light competition’ from other trees) and death due to chance events, such as tree fall, fire and storm damage.

“We found that slow growth was the major contributor to tree death for all species. Plants compete strongly with each other for light – the plants that end up behind in this race have slowing growth and die,” says study author Dr Daniel Falster at UNSW Science.

“On the other hand, tree death due to chance events was the determining factor in the large differences in mortality between species in the forest.

“We also found that species were really quite different in their risk profiles and these differences are not easily predicted.”

Tropical forests contain a highly diverse mix of species, arranged from live-fast-die-young to live-slow-die-old. This research shows that species with a live-fast strategy are more likely to die overall, compared to species exhibiting a live-slow strategy. Moreover, while growth rates have long-been thought to influence mortality, the study shows how this effect varies across all the species in a forest.

'It is critical to understand how tropical forests operate so that we can preserve these natural wonders. Understanding processes such as tree mortality is particularly important – this information is essential to predicting how the biodiversity of forests will change into the future and under changing conditions.'

Lead author Dr James Camac says tropical forests are a treasure, important because of their significant diversity and the wide range of products they produce.

“It is critical to understand how tropical forests operate so that we can preserve these natural wonders. Understanding processes such as tree mortality is particularly important – this information is essential to predicting how the biodiversity of forests will change into the future and under changing conditions.”

Dr Falster says it will be extremely helpful to now have a general method that simultaneously estimates the likelihoods of the two primary hazards faced by plants – and that their new method would correct some old assumptions.

“Previous models assumed mortality of trees effectively declined to zero when plants grow faster, which affects mechanisms maintaining species diversity and predicting biomass stocks. Our results show that risks due to other factors cannot be entirely avoided by fast growth.”

Dr Falster says their study is part of a new wave of ecology, combining state of the art statistical analysis with large datasets.

“Studying tree mortality is hard as it requires extensive monitoring of large numbers of trees over many decades. The results here arose from a unique combination of decades of monitoring done by the Smithsonian Tropical Research Institute in Panama, combined with state-of-the-art statistical analysis developed in collaboration with researchers from UNSW, Macquarie University, and CSIRO's data61.

“It is the first study to simultaneously estimate the likelihoods of two independent hazards faced by plants, and how various individual and species attributes affect these two risks.”

The team now hopes to extend the research to forests all over the world – and to potentially use the method to predict the effects of climate change.

“In the next phase of this project, we aim to examine how our approach works in predicting tree mortality in forests worldwide – the approach we have demonstrated could be used to improve any type of forest management.

“While we did not look at climate change directly in this study, our updated method for estimating mortality could be applied to better quantify how climate change is impacting on forest communities.”