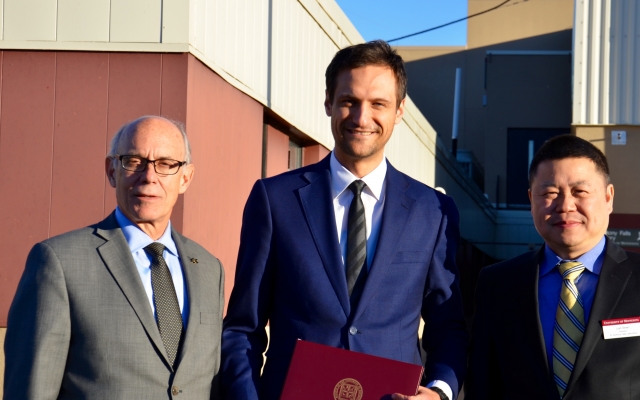 UNSW Engineering alumnus, Dr Conrad Wasko, has been awarded the prestigious Lorenz G. Straub Award for his PhD thesis. The international award is given to the best thesis in hydraulic engineering, hydrology, ecohydraulics, or related field.

Wasko, who graduated UNSW with a Bachelor of Civil Engineering and Statistics, worked as a Project Engineer at the Water Research Laboratory (WRL) prior to undertaking his PhD in Hydroclimatology.

Wasko’s thesis, ‘Continuous Rainfall Simulation in a Warmer Climate’, investigated the impact of increasing temperatures on rainfall patterns and flooding. It found that, at higher temperatures, storm patterns are temporally less uniform, with more precipitation occurring in a shorter duration.

These findings suggest that we will experience increasing flood peaks at higher temperatures, in particular in urban areas.

Wasko then extended his work to investigate the impact of increasing temperatures on streamflow and found that changes in soil moisture are likely to dominate flooding in a future climate.

This result implies that it’s possible to see decreasing flood magnitudes with climate change due to drying soils, which is contrary to the expectation that floods must increase with climatic change.

Wasko said he was honoured and humbled to receive the award.

“When I got the email confirming that I was receiving the award, I cried. To have someone validate that your work is so meritorious after investing your entire body and soul for three and half years into the PhD is overwhelming,” he said.

“It is such a blessing to have had this bestowed on me and, as family is so important to me, having been able to share this award with Lorenz-Straub’s extended family was a huge honour.”

His supervisor, Professor Ashish Sharma from the School of Civil and Environmental Engineering, said: “Conrad deserves it in spades, given the multiple journal publications including two in the Nature publishing group, several invitations to deliver lectures internationally, and the significant impact his work made on engineering design under a changing climate.”

Wasko also said he thoroughly enjoyed his experience as a PhD student at UNSW, particularly working alongside his supervisor.

“Undertaking a PhD can be a very daunting task, because, by its very definition we must do something that hasn’t been done before. But the hydrology group within UNSW are extremely supportive. The academics are incredibly knowledgeable and leaders in their field,” he said.

“Working with Ashish has been a truly fantastic experience. He always makes time for students and he always made me feel like my concerns were his top priority. He is an incredible motivator and pushed me to be the best I could be.”

In the 52-year history of the award, only four researchers from Australian universities have received this award. Wasko was presented with his Straub Award and monetary gift in a special ceremony at the University of Minnesota last month.

Wasko is now a McKenzie Fellow at the University of Melbourne.