Can the G20 live up to its theme of building consensus for fair and sustainable development?

Director of the Institute of Global Finance, Professor Fariborz Moshirian from UNSW Sydney, hopes the G20 can achieve its aims. 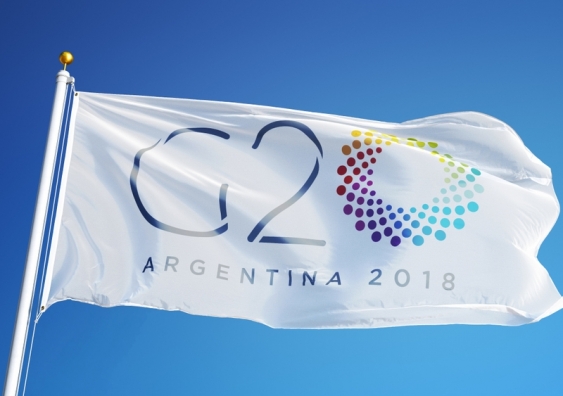 Director of the Institute of Global Finance, Professor Fariborz Moshirian from UNSW Sydney, hopes the G20 can achieve its aims.

"The G20 Summit is themed around 'Building consensus for fair and sustainable development', which is fair enough," says Professor Fariborz Moshirian, from the UNSW Business School.

"I just hope they can achieve this. The theme is focused on creating a consensual approach to future negotiations so that countries can continue to develop in the future with the sense of fairness, equality and true partnership.

"But, as we enter day one, it's not clear if the trade tension between China and the US will calm down or escalate."

The theme will focus on three key points, he says. The future of work, infrastructure for development, and a sustainable food future.

"Outside of the official three key points, there are numerous issues of interest," Professor Moshirian, the Director of the Institute of Global Finance at UNSW, explains.

There is the Trade War.

"The IMF itself has stated that the ongoing trade tensions through Chinese-American relationships and the possibility of Brexit would hurt the global economy," he says.

"Trump will be having a dinner with Jinping at the upcoming gathering in an attempt to work out a trade deal.

"However, at this stage, Trump also states that he is still likely to increase tariffs to 25% (currently 10%) on $200bn of various Chinese imports."

And there is the EU's Stance.

"In an open letter, Tusk and Juncker state that they want to use the summit as an opportunity to discuss issues concerning global confidence, fair globalisation and trade, and climate change," Professor Moshirian says.

"They want to focus on making growth more inclusive, and to ensure that the WTO rulebook is updated to meet present challenges.

"The EU pushes for reforms of the WTO's function to ensure a level playing field in trade."

As for the key theme of the future of work, Professor Moshirian adds: "This is important because of the rapid pace of technological change.

"Technology is good because it is an opportunity for fair and sustainable development, but it can also put pressure on employment, welfare and education agendas.

"I would argue that the discussion should be focused on creating the conditions for better and fairer work.

"Education is of particular importance here, as it is only in investing in human capital that humans can be empowered."

"Currently, there is less money invested in infrastructure than needs to be; the global infrastructure gap is predicted to be US$5.5 trillion from here to 2030," he explains.

"Private investors will be able to help make up this difference.

"Therefore, discussion is centred upon how to incentivise private investors to invest in infrastructure by developing it into a more preferable asset class."