Spanish architects to discuss their approach to heritage in Utzon Lecture 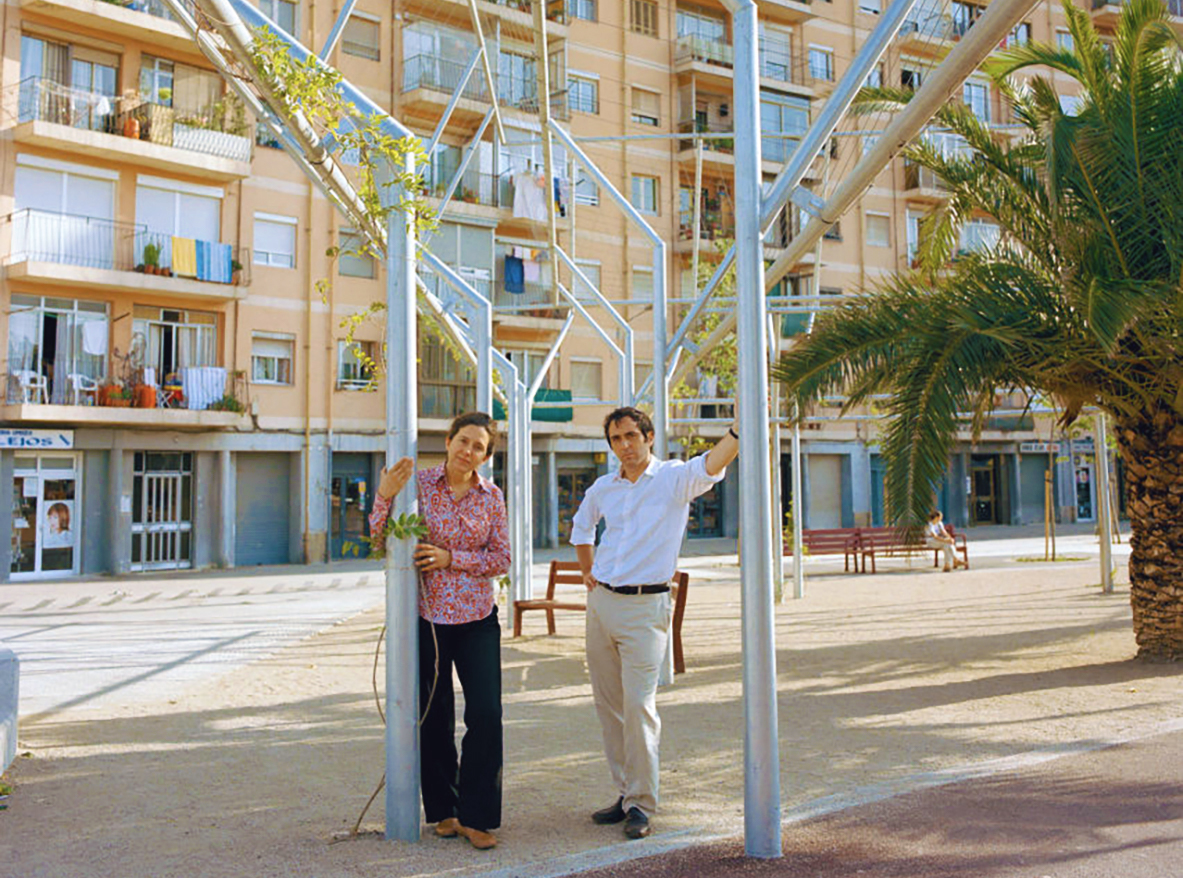 When architects Eva Prats and Ricardo Flores won a competition to design the renovation of a 95-year-old workers’ cooperative in Barcelona into a new theatre and drama centre, they were faced with a ruin that had been abandoned for 30 years.

Rain, wind and pigeons were gradually destroying the building, and the roof had a hole which sunlight penetrated.

“There was a ray of light right at the centre of the old scenery,” Prats says.

“We read this not as a menace of destruction, but as an optimistic sign of a new possible future.”

The rehabilitation resulted in the Sala Beckett International Drama Centre, a place dedicated to promote new drama stories and to put them on stage for the first time.

Rather than knock down the dilapidated old structure as some of their competitors had suggested, the renovation has preserved a large majority of the decoration, such as decorative floor tiles, doors, coloured glass and rosettes.

“The building interested us, not to restore it, but rather to take the ruin forward and make it a participant, with its unfinished character of superimposed periods, in a new reality that would continue to be updated on this foundation,” Flores says.

“Now, a ray of natural light is kept inside the building, changing the atmosphere of its central circulation space throughout the year.”

The co-founders of the award-winning Flores & Prats architectural office in Barcelona will discuss the design process of the Sala Beckett in the first 2019 Utzon lecture.

Titled The Discipline of the Existing, the lecture will be hosted by the UNSW Faculty of Built Environment on 23 January.

Flores and Prats’ work on the drama centre earned them the City of Barcelona Award and the Special Mention at the Spanish National Awards.

The architects also took a full-scale fragment of the Sala Beckett into the Arsenale at last year’s Venice Biennale, “transforming the drama centre into a scenography, resonating with its theatrical character”.

“We will talk [in the Utzon lecture] about the way we work with existing buildings, gradually developing from a process of observing and not from a preconceived or imposed idea of how to deal with existing structures,” Prats says.

“By approaching historic buildings this way, they acquire the role of an actor inside the project, which along with the client and architect, are equally as important.”

Prats says this viewpoint contributes to a city by opening a dialogue between the building and its history, the physical and social heritage.

Most of their projects involve the design of public spaces, social housing, and the rehabilitation of old public structures for new occupations.

“Old buildings have the ability to describe the passing of time, and rehabilitating them involves bringing together all the different layers of its history,” Flores says.

“At the same time, most old structures have very generous spaces with huge dimensions which are perfect for new programs, and we think that it is crucial to reuse them and, in giving them new life, we have an opportunity to make them participate again in the dynamics of the city.”

Their work has obtained among others the Grand Award in Architecture at the Royal Academy of Arts of London for their Mills Museum in Mallorca, and the City of Palma Award for the Cultural Centre Casal Balaguer.

Every project they work on is considered “research”.

“We try to research the interests or line of investigation that every project opens, and therefore once they are built, they become evidence of the interests, and we can test and learn from the outcome. Later, we translate these learnings into new projects that may come, making the projects the field where your interests can evolve and transform in time.”

They say that heritage is important to their practice, as it “explains the time that has passed, becoming the real testimonies of the culture of a place”.

“Our way of working with heritage is to deal with existing elements,” Prats says.

“We use them and work with them, even if we are working against them. It's a way of waking them up, making them visible.”

Prats and Flores are both professors of Design Studio at the School of Architecture of Barcelona and RMIT, and have directed design workshops in universities in the US, South America, Europe and Australia.

As well as the Utzon lecture, the architects are also hosting a two-week studio during their time at UNSW.

They say students should expect to do “many hours of drawing” in the design workshops.

During the reception which follows the Utzon lecture, UNSW will launch a book by UNSW BE academics Xing Ruan and Ainslie Murray, Hand & Mind.

The book profiles architectural and design practitioners who are paired with writers to explore their inspiration, the genesis of their projects and problems encountered.

It features a series of projects from UNSW alumni, staff and students, from Glenn Murcutt and Sam Marshall to Felicity Stewart and Matt Hollenstein.