Professor Michael Coper has been awarded UNSW’s highest honour in recognition of his service to the law and legal education. 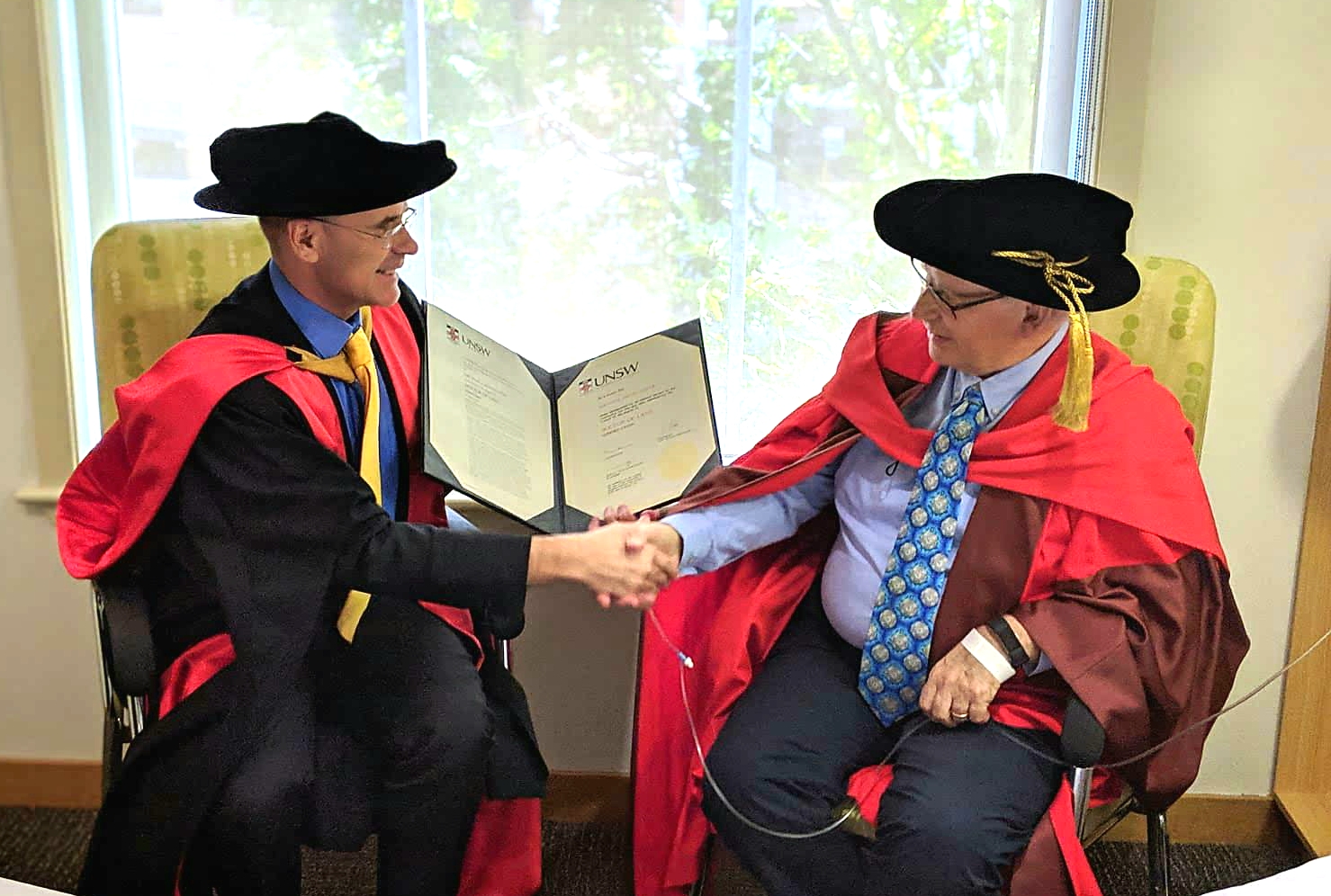 One of the founders of UNSW Law, Emeritus Professor Michael Coper AO FAAL, has been awarded UNSW’s highest honour – an honorary doctorate – in his Canberra hospital room where he is being treated for cancer.

“Professor Coper has given exemplary service to the law and to legal education and has a longstanding relationship with UNSW Law as one of its seven founding academics,” Professor Williams said in the citation.

“The Council of UNSW, noting his eminent service to society, resolved that it would be fitting if the degree of Doctor of Laws honoris causa were to be conferred on Professor Michael Coper.”

In the 1980s, Professor Coper was a member of the constitutional body the Inter-State Commission, and was involved in private practice in the early 1990s.

Professor Williams said Professor Coper had written extensively on constitutional law and the judicial process, with his research extending to legal biography, oral history, and law, philosophy and photography.

“A celebrated author, Professor Coper came to prominence with his prize-winning book Freedom of Interstate Trade under the Australian Constitution in 1983, which was influential in the High Court’s change of direction five years later in the landmark case of Cole v Whitfield, in which Professor Coper also appeared as counsel,” Professor Williams said.

His 1987 book, Encounters with the Australian Constitution, received great acclaim, as did the comprehensive Oxford Companion to the High Court of Australia, which he conceived and co-edited in 2001 with fellow UNSW Law founding members Professor Tony Blackshield and Professor Williams.

He has conducted interviews of former judges and others which resulted in an oral history of the High Court and has also written about legal education.

Professor Coper’s academic roles have included Chair of the Council of Australian Law Deans from 2005 to 2007; Vice-President of the International Association of Law Schools from 2011 to 2014; and he is a member of the American Law Institute and a Foundation Fellow of the Australian Academy of Law.

He was appointed as Professor Emeritus of the ANU in 2017, and Federation Press published a book of essays in his honour: Encounters with Constitutional Interpretation and Legal Education: Essays in Honour of Michael Coper last year.

Last year, Professor Michael Coper was appointed an Officer in the Order of Australia for distinguished service to legal education and the law as an academic, author and administrator; and for his advisory roles and work in transport safety.

“The recognition for his distinguished service to transport safety was a nod to his work assisting in the running of an industry self-regulation scheme for truck operators,” Professor Williams said.

Professor Williams said he had been blessed to call Professor Coper a friend for 25 years.

“When I joined ANU in my first academic post, Michael also began there as a professor. I could not have asked for a more generous mentor,” he said.

“He never missed an opportunity to ensure that our work was fun, whether this was through having me ring him mid class pretending to be the prime minister offering him a position on the High Court or running a caption competition for students.”

Professor Williams said he also learnt then that Professor Coper was deeply invested in the UNSW Law method of teaching.

“When I began at ANU, he instituted a swear jar in his office for anyone who used the word ‘lecture’, believing that the only way to teach was to be highly interactive.”

Professor Williams said Professor Coper received the honorary doctorate surrounded by loved ones and family who had flown in from around the world.