Big plans are all well and good, but it pays to think carefully how much red ink we should be willing to accept. 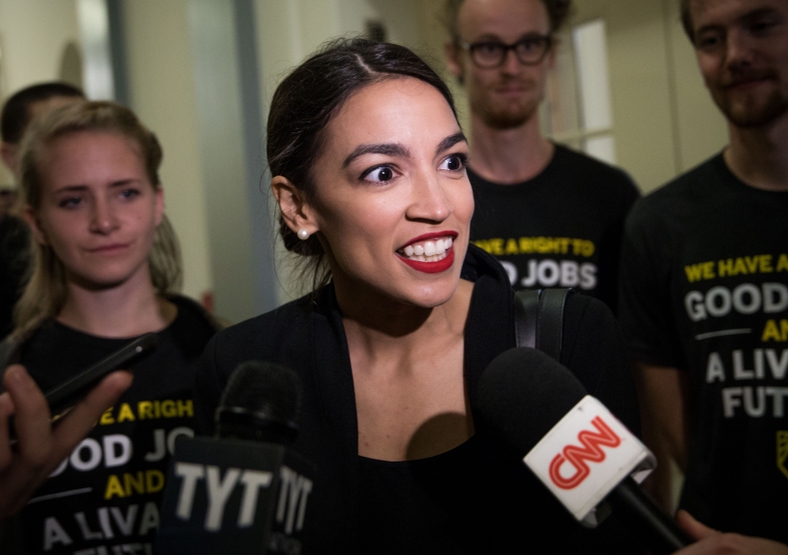 It seems that whoever wins the White House in 2020, the US federal deficit will blow up.

President Donald Trump has already signed into law massive tax cuts that are estimated to expand the deficit by at least $US1.5 trillion over the next decade.

The list of Democrats seeking their party’s presidential nomination has moved into double digits, but there aren’t many fiscal conservatives among them.

Bernie Sanders looks set to try and outdo his own 2016 campaign and its big-spending proposals that include “Medicare for all” and free public tertiary education. Other leading contenders such as senators Elizabeth Warren and Kamala Harris have announced similar plans.

And the rock star du jour of US progressive politics, Alexandria Ocasio-Cortez (or @AOC as the cool kids say), has gone even further with her “Green New Deal” – a grab bag of gigantic spending projects being presented as an environmental policy. They are estimated to cost between $US51 trillion and $US93 trillion over a decade.

The big question amid all this red ink is: does it matter?

Red ink for a return

There have generally been two schools of thought on this. On the conservative side, elected representatives and commentators have emphasised that higher spending eventually results in higher interest rates as borrowers compensate for risk, and higher taxes as a result. In short, there’s no free lunch.

The more liberal position on deficits is that it depends what the government spends the money on. Economic stimulus during a downturn, such as during the Great Recession of 2008, is a good idea provided that it is temporary. And even in ordinary economic times, there may be large investments in physical and social infrastructure that have high returns, far exceeding the government’s cost of borrowing.

If spending on early-childhood education has double-digit rates of return and the government can borrow long-term at 3%, these investments are a no-brainer.

Notice the logic in that argument. The returns need to be carefully assessed and compared to the actual government cost of borrowing.

Not red ink without reason

Various commentators on the political left – explified by Paul Krugman of the New York Times – argue that this logic is licence for serious government spending on infrastructure, but with an eye to the overall size of the spending. As Krugman puts it:

Am I saying that Democrats should completely ignore budget deficits? No. If and when they’re ready to move on things like some form of Medicare for All, the sums will be so large that asking how they’ll be paid for will be crucial.

I have said repeatedly in this column and elsewhere that the same is true in Australia. We can borrow cheaply, there are high-return government investments to be made, and we are suffering from “secular stagnation” – a protracted period of lower growth.

But that doesn’t mean that @AOC’s socialist (her own term) wish list can be funded in a consequence-free way just because the US prints its own currency.

Accompanying the @AOC-Sanders-Warren agenda is a cottage industry of “heterodox” economists like Stephanie Kelton who say deficits don’t matter for countries that issue their own currencies. Why? Because they can always print more. They risk hyperinflation if they do enough of it, but heterodox economists argue that’s unlikely.

Except in Weimar Germany. And Zimbabwe. And Venezuela.

The recent tragedy in Venezuela is instructive. When the crude oil price collapsed in 2014 the government was left with a huge deficit, but still needed to pay the salaries of government workers and the military. So it printed money. With more money in the economy, but no increase in the number of things available to buy, the price of goods climbed.

That meant the government had to print still more money for the workers whose incomes bought less, which led to more inflation, more money printing, even higher prices, and pretty quickly hyperinflation of over 1,200,000%.

Just because Australia has avoided hyperinflation…

Economists who promote the idea of large deficits point out that that hasn’t happened in Australia or the United States, but one of the reasons for that is that they have avoided really large deficits.

After the next US election, who knows.

In a timely warning, Federal Reserve Chair Jerome Powell told the US Senate this week: “The idea that deficits don’t matter for countries that can borrow in their own currencies, I think, is just wrong.”

More importantly, the idea that deficits need not matter is dangerous.

It is a proposition with zero appeal among mainstream economists, but populist politicians are drawn to it and are increasingly keen to sell it to the public.

Let’s be clear. We should invest more in education, health, high-speed rail and child care if the numbers stack up, even if it means increasing deficits. But deficits do matter. We would be unwise to think we could do it without limit.

Read more: Now is the time to plan how to fight the next recession.