Australia has the potential to influence a new wave of tech investment and development. The global success of Atlassian and Wisetech can be replicated – but there’s still a long way to go. 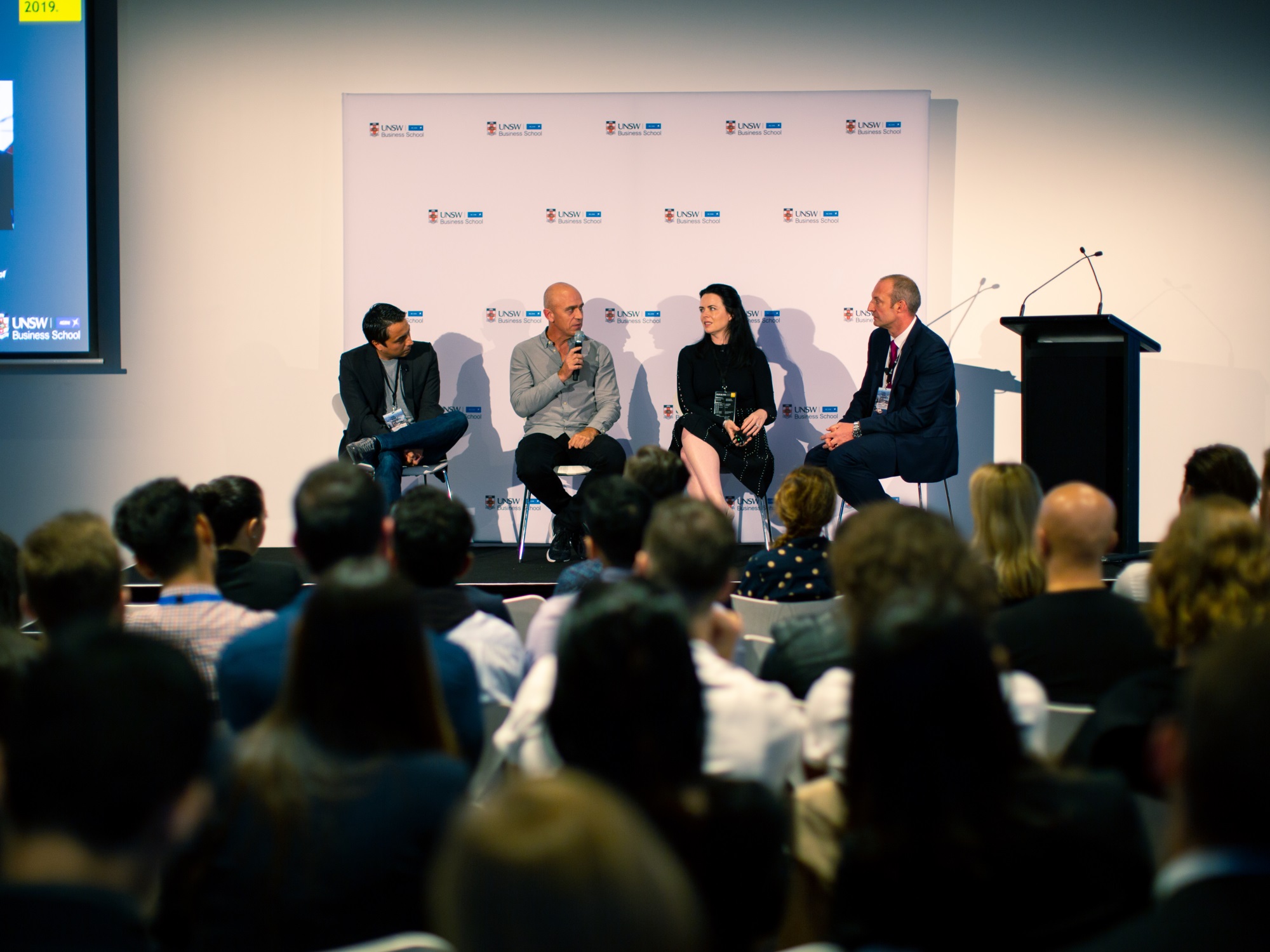 Australia has the potential to influence a new wave of tech investment and development. The global success of Atlassian and Wisetech can be replicated – but there’s still a long way to go. Emerging companies need to do two things well to succeed: create the right culture for innovation and build a strategy to engage with China. These were just some of the key insights shared during a panel of AGSM MBA Alumni at the 2019 MBA World Summit held in Sydney recently.

The AGSM @ UNSW Business School hosted 100 delegates from 36 business schools for this sixth consecutive Summit. Over three days they discussed current and future global challenges, kicking off with a panel on Innovating for Global Growth hosted by Professor Nick Wailes, Director AGSM and Deputy Dean UNSW Business School. Gail Williamson of WiseTech Global; Stephen Scheeler, The Digital CEO and AGSM Executive-in-Residence; and Nicholas Chu, CEO and Founder of Sinorbis and Professor of Practice at UNSW Business School, joined Professor Wailes to share their insights and experience.

Culture that leads to extraordinary growth

“I joined WiseTech before we became an IPO unicorn. Since our listing in 2016, the company has been driving a phenomenal rate of growth, having tripled its revenue, quadrupled its workforce and expanded its global platform with thousands of new innovations,” said Williamson.

WiseTech has a clearly defined culture of grit, transparency and curiosity contributing to its exponential growth. “Over decades we’ve created an environment where you are expected to take risks and break the status quo,” she said. “Development is an iterative process and our people know they need to ideate, test and refine, and embrace failure as necessary to move closer to success.”

Nicholas Chu of Sinorbis agrees creating space for failure is vital for organisations to stay ahead of the curve. “You have to give people autonomy and time and have a high tolerance for failure. It’s essential for a culture of innovation. If you’re afraid to fail you won’t be able to innovate,” he said.

Chu knows the strength of a culturally aligned workforce. He has run some of the world’s leading innovative travel groups and in founding Sinorbis, a digital marketing software company, his mission is to connect Chinese demand with the rest of the world.

“To create change you need your people to believe in the mission. Strategy is one thing, but execution is another,” said Chu. “Vision and strategy without execution is just hallucination – and good execution is about the people and culture.”

Stephen Scheeler believes successful execution hinges on a leader’s ability to foresee trends and incite change with an agile team that can pivot – fast.

As former CEO of Facebook in the Asia-Pacific, Scheeler was with the tech giant through many of its crucial pivots: the acquisition of Instagram, switching to mobile, introducing video and creating Messenger.

“You need to be able to detect the faint signals that something will change or disrupt and then swiftly pivot,” said Scheeler. “While externally Facebook may have the appearance of being chaotic, internally it is directed and transparent. Mark [Zuckerberg] was very clear in creating non-goals for the company, and everyone knew the mission. We knew what we were, and what we were not. If you can create a culture where people are invested in the mission over a product or department, then that’s a good way to get people to pivot.”

It’s beneficial for everyone to strengthen our engagement with China

“If Europe was in power in the 19th century, the US in the 20th century, then Asia will be the 21st century,” said Professor Wailes in his opening remarks. “You will need to engage with and understand Asia.”

Panellists agreed there is an acute need for businesses to have a strategy for working with China – the country expected to be a powerhouse in technology and economic growth this century. As it is a challenging market, Chu intends to help western companies overcome common market entry barriers into China using Sinorbis technology.

“China has 20% of the world’s Internet population. And there has been an explosion of demand for overseas products coming from China, but currently there are two Internets – one led by the US, and the other led by China. To enter China, western companies have to re-think everything they think they know about digital, as the language, culture and online ecosystem is completely different,” said Chu. “I want to close the gap between the two.”

WiseTech, as a global organisation with its technology operations across 40 countries, is already well established in the Chinese market. “China is a key part of the global supply chain and significant for logistics organisations worldwide,” said Williamson. The company entered the market in 2006 and since then, has made a number of investments in technology and in-country expertise. This includes investing significant resources to localise its global execution platform for Chinese trade, building out a strong in-country presence across six locations, and acquiring a small Chinese software vendor in 2015. In addition, WiseTech is now one of the few global logistics software companies engaging directly with the Chinese ports, who play a key role in global logistics coming through China.

“We enable and empower logistics companies across 130 countries and with China being the largest export economy, third largest import economy and the largest ecommerce market globally, we ensure that we also engage and apply our innovation resources here, not only to facilitate more efficient trade and digitised logistics transactions in-country, but also bring the world to China too.”

WiseTech shines a spotlight on Australia as a platform for innovation and wants to encourage our corporates, capital markets and government to build the technology landscape. “When more home-grown, potentially global, technology companies commit to the ASX, that can help reshape Australia’s economy to the benefit of future generations,” said Williamson.

Chu, who has a UK and French background, also believes Australia offers fertile ground for growing tech companies. “It’s an advanced market in many ways. It may be a small market population-wise, but the technology adoption rate here is incredibly high,” he said. “It has been a successful testing ground for many successful products, including Google Maps and Microsoft Office.”

Australia is very attractive for highly skilled immigrants. WiseTech alone has more than 50 nationalities in their 500-strong Sydney innovation HQ. And Scheeler agrees the country attracts some of the world’s best developers: “People come here for opportunity, and to build technology.”

AGSM also attracts MBA students from around the world, and currently has candidates from 21 nationalities in the 2020 Full-Time MBA cohort. The school places real value on diversity and as an asset in education, in businesses, and in solving economic and social problems in the future.

To learn more about our MBA programs head to: www.agsm.edu.au
If you have further questions, call or email: +61 2 9931 9490 or admissions@agsm.edu.au