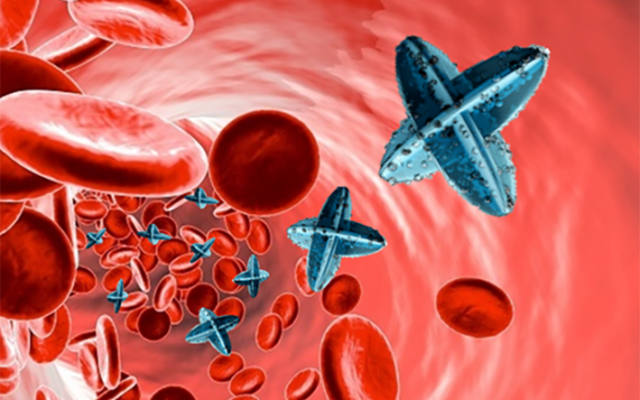 UNSW engineers have shown that micro-submarines powered by nano-motors could navigate the human body to provide targeted drug delivery to diseased organs without the need for external stimulus.

Cancers in the human body may one day be treated by tiny, self-propelled ‘micro-submarines’ delivering medicine to affected organs after UNSW Sydney chemical and biomedical engineers proved it was possible.

In a paper published in Materials Today, the engineers explain how they developed micrometre-sized submarines that exploit biological environments to tune their buoyancy, enabling them to carry drugs to specific locations in the body.

Corresponding author Dr Kang Liang, with both the School of Biomedical Engineering and School of Chemical Engineering at UNSW, says the knowledge can be used to design next generation ‘micro-motors’ or nano-drug delivery vehicles, by applying novel driving forces to reach specific targets in the body.

“We already know that micro-motors use different external driving forces – such as light, heat or magnetic field – to actively navigate to a specific location,” Dr Liang says.

“In this research, we designed micro-motors that no longer rely on external manipulation to navigate to a specific location. Instead, they take advantage of variations in biological environments to automatically navigate themselves.”

What makes these micro-sized particles unique is that they respond to changes in biological pH environments to self-adjust their buoyancy. In the same way that submarines use oxygen or water to flood ballast points to make them more or less buoyant, gas bubbles released or retained by the micro-motors due to the pH conditions in human cells contribute to these nanoparticles moving up or down.

This is significant not just for medical applications, but for micro-motors generally.

“Most micro-motors travel in a 2-dimensional fashion,” Dr Liang says.

“But in this work, we designed a vertical direction mechanism. We combined these two concepts to come up with a design of autonomous micro-motors that move in a 3D fashion. This will enable their ultimate use as smart drug delivery vehicles in the future.”

Dr Liang illustrates a possible scenario where drugs are taken orally to treat a cancer in the stomach or intestines. To give an idea of scale, he says each capsule of medicine could contain millions of micro-submarines, and within each micro-submarine would be millions of drug molecules.

“Imagine you swallow a capsule to target a cancer in the gastrointestinal tract,” he says.

“Once in the gastrointestinal fluid, the micro-submarines carrying the medicine could be released. Within the fluid, they could travel to the upper or bottom region depending on the orientation of the patient.

“The drug-loaded particles can then be internalised by the cells at the site of the cancer. Once inside the cells, they will be degraded causing the release of the drugs to fight the cancer in a very targeted and efficient way.”

For the micro-submarines to find their target, a patient would need to be oriented in such a way that the cancer or ailment being treated is either up or down – in other words, a patient would be either upright or lying down.

Dr Liang says the so-called micro-submarines are essentially composite metal-organic frameworks (MOF)-based micro-motor systems containing a bioactive enzyme (catalase, CAT) as the engine for gas bubble generation. He stresses that he and his colleagues’ research is at the proof-of-concept stage, with years of testing needing to be completed before this could become a reality.

Dr Liang says the research team – comprised of engineers from UNSW, University of Queensland, Stanford University and University of Cambridge – will be also looking outside of medical applications for these new multi-directional nano-motors.

“We are planning to apply this new finding to other types of nanoparticles to prove the versatility of this technique,” he says.