OPINION It's time we moved the goalposts on Indigenous policies, so they reflect Indigenous values

Indigenous procurement policies are kicking goals, but who for? 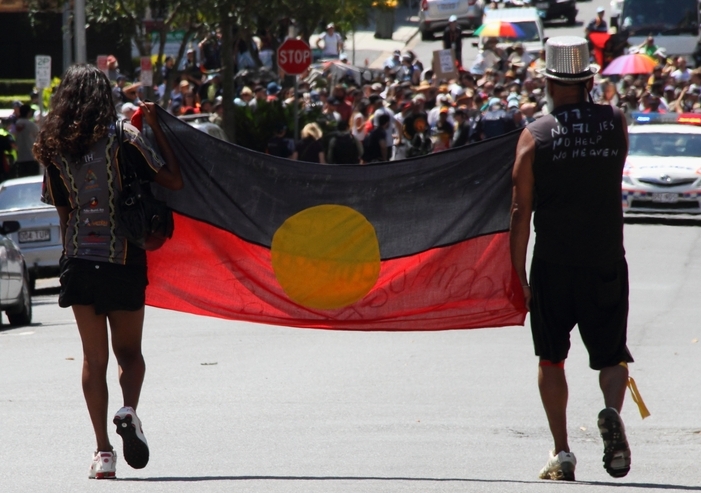 Adelaide football great Eddie Betts was just 15 when he moved to Melbourne from Port Lincoln, South Australia, to pursue his AFL career. Hawthorn legend Cyril Rioli was 14 when he left his family in Darwin.

They are among many Indigenous players in Australian football who have covered great distances – moving thousands of kilometres, often as teenagers, for a shot at the big time.

Not all make it. Sometimes the separation from kin and culture is too much.

It’s not just a predicament for those with a chance to be a sporting star. Many Indigenous people in regional and remote Australia face a hard choice between their mob and a job.

What price would you put on leaving your family, community and other things you value? How good would a job have to be to make it worthwhile?

This a dilemma for those who make and administer the policies and programs intended to “close the gap” between Indigenous and non-Indigenous Australia.

Indigenous people don’t necessarily see the benefits of working being worth the required costs the same way as non-Indigenous people. Any policy that doesn’t account for this crucial human factor is probably doomed to fail.

We’re studying how unacknowledged cultural differences shape the effectiveness of government programs and policies in the context of Indigenous procurement policies.

Our focus is the construction industry, because it is one of the largest employers of Indigenous Australians. The federal government has also committed A$75 billion in to building transport infrastructure investment over the next decade. This makes the sector especially important to Indigenous employment.

They are increasingly being used by local, state and federal governments, in preference to approaches such as directly subsidising jobs, such as occurred under the old Community Development Employment Projects scheme.

The Commonwealth Indigenous Procurement Policy (IPP) requires at least 4% of the workforce deployed on a contract, and 3% of the workforce of the contractor, be Indigenous. Government departments have to meet contract targets to satisfy performance requirements.

The policy is so far regarded as a success, because it has exceeded initial targets. Under “IPP 2.0” there will be a further target – that 3% of the financial value of federal contracts go to Indigenous businesses by 2027.

Good intentions drive such procurement policies. The Indigenous employment rate is barely 48%, compared to 72% for non-Indigenous Australians of working age. The government set a target ten years ago to halve the gap. 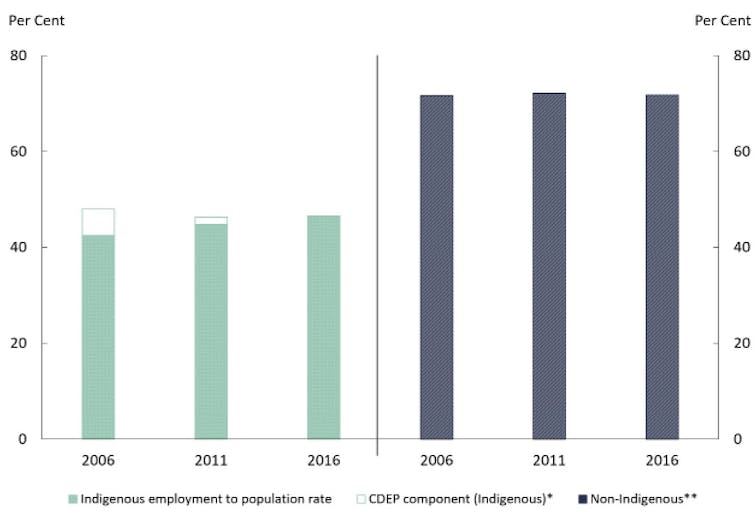 Employment rates adjusted to exclude participants employed under the Community Development Employment Projects (CDEP) program, while including all CDEP participants in the underlying population count. The CDEP program no longer existed in 2016, so no estimate is shown.

But any Indigenous jobs policy is flawed if it doesn’t grapple with the cultural problem of someone having to move “off country” and be separated from his or her community for an extended period.

Policies need to appreciate the importance of connection to country and kin in Indigenous culture. They cannot assume an equal commitment to the hegemonic values of individualism and materialism.

We have been talking to people in Indigenous communities and organisations to better understand the personal experience of procurement policies.

Appreciating both positive and negative impacts has important implications for governments wanting to properly evaluate the true social value of the policies.

The federal government has evaluation guidelines, which recommend involving stakeholders using participatory approaches. But the risk of miscalculating the social value created by Indigenous procurement policies is increased when an Indigenous sense of social value is not reflected in the contract targets and financial values that measure policy success.

There’s a risk of putting limited resources into the wrong initiatives, not the ones that create real value for Indigenous Australians.

There is already concern Indigenous procurement policies have mostly benefited a small group of Indigenous business people and their partners. Last year the federal minister for Indigenous Affairs, Nigel Scullion, ordered a crackdown on sham arrangements to exploit the system (a practice known as “black cladding”).

What good is a policy that fails on many human levels yet gets counted as a success?

Not that there has been a lot of measurable successes.

A decade ago the Australian government set the target of halving the gap between Indigenous and non-Indigenous employment rates.

The deadline has come and gone. Virtually “no progress” has been made on this or other Closing The Gap targets.

It’s clear we need a new paradigm to evaluate Indigenous policies and programs.