UNSW rocketry team over the moon about successful launch 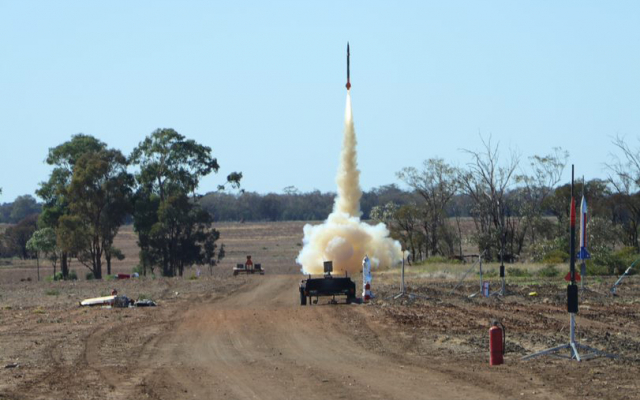 After competing in the inaugural Australian Universities Rocket Competition, the sky is the limit for a group of UNSW Science and Engineering students.

A group of UNSW Science and Engineering students celebrated its highest achievement after competing in the inaugural Australian Universities Rocket Competition (AURC) over the Easter weekend.

As part of the Thunda Down Under rocketry event held in southwest Queensland, AIAA UNSW achieved a successful first launch of the Ainsworth 203 rocket which included retrieving the entire rocket intact, post-launch.

While missing out on a placing, the result meant one of the team members, Projects Director Justin Tran, was awarded a ‘High Power Rocketry Level 3 Certification’ which ensured the group can launch bigger rockets in the future.

Justin, who is three years into a double degree in Aerospace Engineering and Business, says the experience was the most challenging, yet rewarding experience the AIAA UNSW Rocketry Team has participated in to date.

“It was such an achievement for the whole team when Ainsworth 203 ignited and lifted off. We had a slight problem with the parachute deployment which resulted in a mad dash to a neighbouring farm to retrieve the rocket which had travelled much further than anticipated.

“However, everything worked perfectly and we were rewarded with certification to fly more powerful motors in future competitions.”

The AIAA UNSW team, which is comprised of members of BLUEsat and Biosphere project teams as well as students with strong interests in aerospace technology, were required to design, build and launch a single stage rocket – one with a single rocket motor or a cluster of motors – to a target height of 10,000 feet while carrying a payload of at least 4kg. 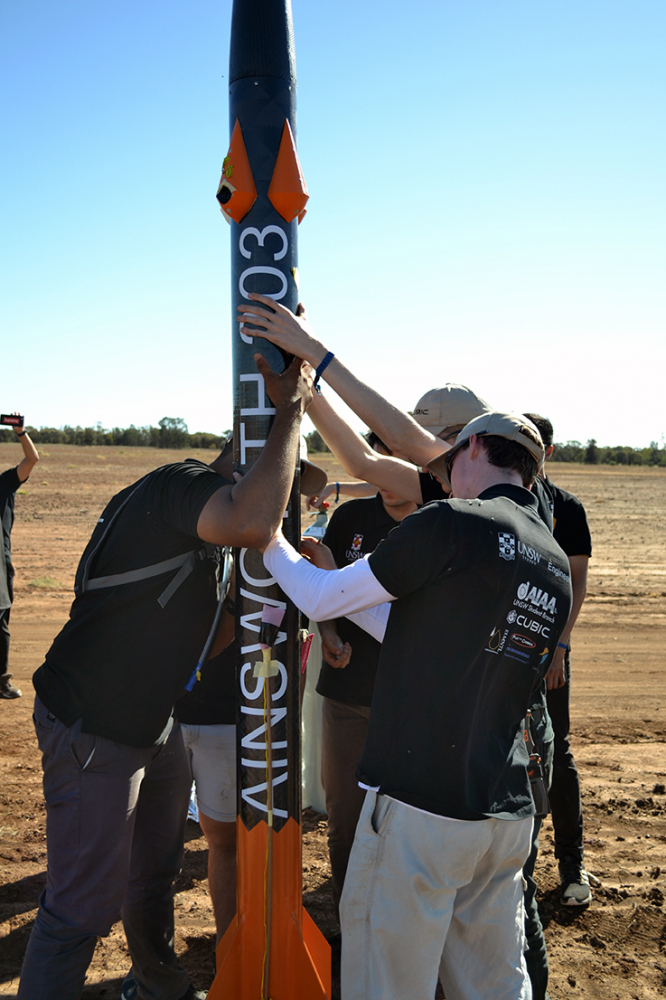 Dr Danielle Moreau, a lecturer at the School of Mechanical and Manufacturing Engineering, who mentors the UNSW AAIA Rocketry team, said that student participation in extra-curricular projects at university puts them way ahead of their peers.

“Our future engineers will need not only technical expertise, but possess communication and cooperation skills, the ability to work in different environments and the capacity to manage information and others.

“Our students are developing this incredibly important skill set through this project.”

Justin says that seeing so many students and hobbyists come together for their love of rocketry really “lit a fire within the team”...so to speak.

“It inspired us and made us hopeful for the future of the Australian space industry to see such a rich passion for aerospace and the multitude of roles that you could move into and are being created all the time,” Justin says.

“In the future, we have so much that we want to do to make AIAA Rocketry a truly formidable student team in Australian rocketry, but also to give back in a more meaningful and impactful way to UNSW students.”

In the short term, Justin says the team will be looking to refine Ainsworth 203 to offer as a launch platform for experiments occurring around UNSW.

“We want to design and manufacture a rocket capable of hitting 30,000 feet for use in next year’s AURC and the Intercollegiate Rocket Engineering Competition in the US, as well as implement a way for budding rocketeers to increase their skills and step into more critical roles within the team,” he says.