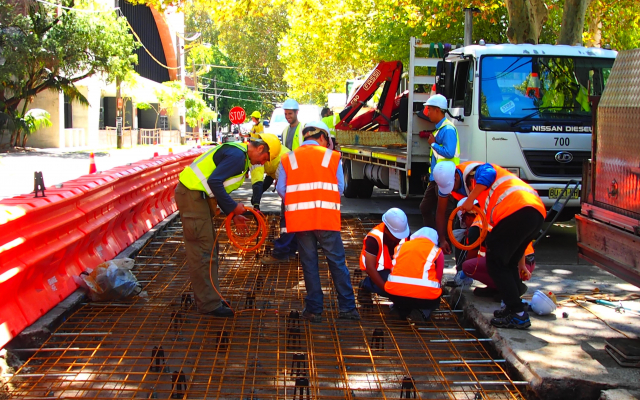 Drivers on the way to Sydney Airport will stress test the new geopolymer concrete, which is made from industrial waste while emitting less greenhouse gas.

Concrete made using industrial waste from coal-fired power stations and steel manufacturing is being used in a world-first roads trial in Sydney.

The City of Sydney is putting the environmentally friendly building product to the test on a busy inner-city street, replacing a 30 metre section of roadway on Wyndham Street in Alexandria.

Wyndham Street is a major road leading to Sydney Airport and the high volume of traffic provides perfect conditions for the trial.

Nine sensors have been positioned under the concrete to monitor and compare how the geopolymer concrete performs.

UNSW Sydney researchers and the CRC for Low Carbon Living (CRCLCL) will use results from the trial to create the first set of industry guidelines for geopolymer concrete.

“I’m proud that the City of Sydney was Australia’s first carbon-neutral local government and that we’re continuing to take significant steps to reduce our carbon footprint,” the Lord Mayor said. “Projects like this geopolymer trial can result in new products that make a real difference in slashing carbon emissions.

“Local governments are responsible for maintaining local roads, so if we can purchase more environmentally sustainable materials, we can fight climate change and provide quality infrastructure for our community.

“With 70% of the concrete produced today going into pavements and footpaths, there is great potential to further lower emissions from our operations. We’re continually working with concrete suppliers to reduce the amount of pollution and greenhouse gases emitted during the production of concrete for our local roads, and we already use sustainable green concrete for all our footway renewal works – which adds up to 25,000m2 per year.”

Made from fly ash and blast furnace slag, geopolymer generates just 300 kilograms of CO2 per tonne of cement, compared with the 900 kilograms from traditional cement production – saving the equivalent of the electricity used by an average household every two weeks.

Research has been undertaken since the '90s into geopolymer, but it’s only now that it is being explored as a product that is not only better for the environment, but also commercially viable.

Putting industrial waste to use

The low-CO2 concrete has the potential to put the 400 million cubic tonnes of globally documented waste from the coal and steel industries to good use.  While a small amount is currently used in construction, much of it is stored on site.

UNSW Sydney researchers will monitor the road performance for up to five years. Professor Stephen Foster, Head of the School of Civil and Environmental Engineering, is the CRCLCL project lead and describes the trial as “a huge step forward”.

“This trial will help drive step change in the industry. Many concrete companies are already doing a lot to change, but this trial really gives it another push,” Professor Foster said. “Research into geopolymer has been undertaken since the '90s, but it’s only now that it’s starting to be commercialised.

Years of data on geopolymer concrete

“While we’ll monitor the road performance for up to five years, a lot of the data collected in the first three to 12 months of this world-first trial will be used to confirm our models and strengthen our predictions.

“This trial is important because we need demonstration projects to accurately assess the performance of geopolymer over time so that there can be broader uptake.”

“Our collaboration with organisations such as the City of Sydney and the publication of the research findings will further de-mystify and promote the use of geopolymer concrete in construction. Geopolymer concrete has great engineering properties. It is a durable, high performance product that has a low carbon footprint when used in construction,” Mr Heidrich said.

“It's a fundamental tenet in business that you need to be constantly innovating and investing into new technologies. This trial will provide real examples of Geopolymer concrete use that we can all use.”

According to Dr Tommy Wiedmann, Associate Professor of Sustainability Research at UNSW, if all concrete produced in one year was geopolymer instead of traditional concrete, 12,000 kilotons of CO2 would be saved.