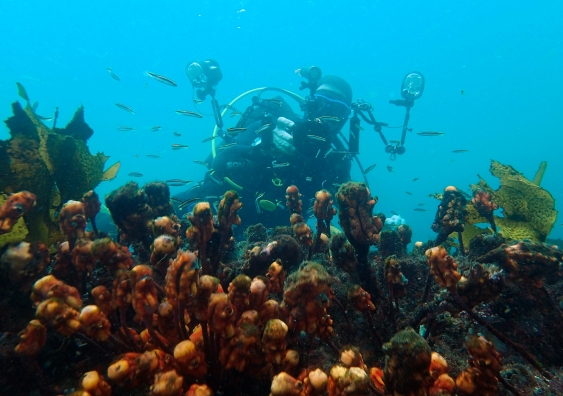 World Oceans Day is a global awareness day on the United Nations' calendar, with hundreds of events around the world celebrating oceans on June 8.

This year, the theme for World Oceans Day is “Gender and the Ocean” – “an opportunity to explore the gender dimension of humankind’s relationship with the ocean.”

UNSW Dean of Science, Emma Johnston AO, says UNSW is reflecting on how the ocean connects us all on World Oceans Day.

"Our UNSW researchers work hard to understand ocean environments and we are passionate advocates for evidence based policy-making – helping to create a sustainable future and celebrating the many forms of life that the ocean supports."

To help celebrate, we’ve captured some of our leading researchers sharing what the ocean means to them. We’ve also compiled some of the many research highlights and student contributions in the space.

A study looking at variations in past sea ice cover in the Norwegian Sea found the shrinkage and growth of ice was instrumental in several abrupt climate changes between 32,000 and 40,000 years ago.

The growth or shrinkage of sea ice is often viewed as a symptom of climate change, but research shows it may have played a more causative role in abrupt climate changes thousands of years ago.

The study, which was published in Science Advances, examined sediment core extracted from the Southern Norwegian sea to find that there were dramatic changes in the sea ice cover 32,000 to 40,000 years ago.

Whale songs’ changing pitch may be response to climate changes

Blue whales - among the loudest animals in the oceans - are singing a little flat, and there may now be more clues as to why.

Blue whales around the world have been dropping pitch incrementally over several decades, but the cause has remained a mystery. An international study may have uncovered some clues.

The study was led by Dr Emmanuelle Leroy, who conducted the research with colleagues at University of Brest & French National Centre for Scientific Research (CNRS), Geosciences Ocean Lab, Plouzané, France. Dr Leroy is now based at UNSW Sydney.

The team found a correlation between the seasonal variation in the whale’s pitch with breaking sea ice in the southern Indian Ocean.

The six-year study on the Sydney Desalination Plant looked at the effects on marine invertebrate recruitment of pumping and ‘diffusing’ of high concentration salt water back into the ocean.

The UNSW Sydney-led research was published at a time of increasing reliance on desalination plants for drinking water across most states in Australia, as drought conditions in the east and south worsen and domestic water supplies decline for both metropolitan and regional areas.

UNSW Dean of Science and senior author of the study, Professor Emma Johnston AO, said the results are timely as they coincide with renewed focus on desalination, with the plants in Sydney and Melbourne preparing to start operations due to rapidly decreasing water supplies.

Mudflats and other intertidal ecosystems are shrinking

In a world-first study of its kind, UNSW and UQ researchers used artificial intelligence and extensive satellite imagery to find that intertidal zones around the globe have receded.

A joint study between UNSW Sydney and the University of Queensland (UQ) mapped the world’s intertidal zones for the first time to reveal a significant loss of the crucial ecosystem, as reported in Nature.

Using artificial intelligence and extensive satellite imagery, the study showed that global foreshore environments declined by up to 16 per cent between 1984 and 2016.

Dr Nick Murray, with UNSW’s School of Biological, Earth and Environmental Sciences said tidal flats – which he defined as mudflats, sand flats or wide rocky reef platforms – had reduced in size partly because of coastal development and partly because of climate change.

Jessica Merrett is a PhD student at the Evolution and Ecology Research Centre at UNSW Science, studying the impact and distribution of plastic debris on the beaches in Sydney Harbour. In particular, she is investigating how small creatures living in the sand called amphipods are affected by this new artificial addition to their habitat.