UNSW's Thorsten Trupke and Robert Bardos were honoured for their breakthrough technology improving the quality of solar cells. 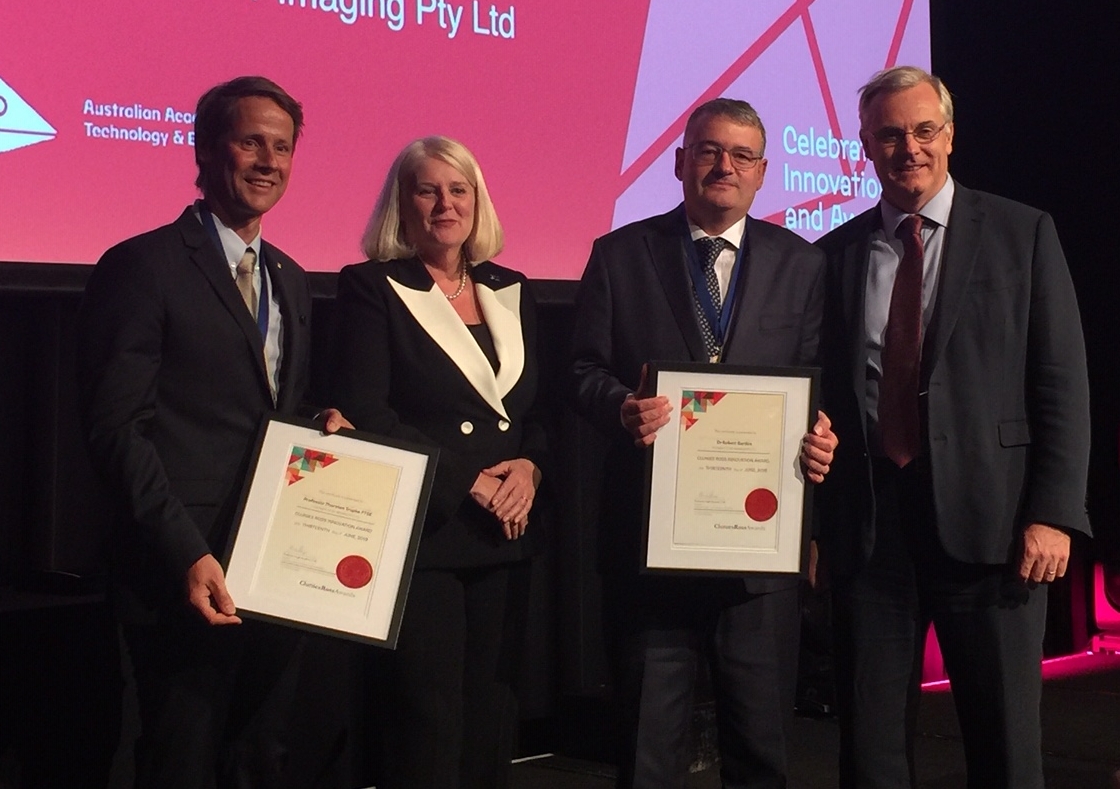 Two UNSW Sydney researchers were presented with one of Australia’s most prestigious research awards in Sydney last night, for their invention that has had a substantial impact on the development and manufacturing of solar cells worldwide.

Professor Thorsten Trupke and Adjunct Associate Professor Robert Bardos were presented with the 2019 Clunies Ross Innovation Award, for their breakthrough photoluminescence imaging technology, which can spot defects in solar cells in a fraction of a second. Comparable assessments previously took several hours to complete.

The Clunies Ross Awards are organised by the Australian Academy of Technology and Engineering and recognise people who have shared their vision and knowledge to apply technology for the benefit of Australia.

Presenting the award, Academy President Professor Hugh Bradlow said: “The nation’s future prosperity depends on embracing new technology to address critical national challenges. More than ever, we need knowledge creation, technology and innovation that can be harnessed to drive commercialisation and economic and social benefit. Professor Trupke and Adjunct Associate Professor Bardos have made a tremendous contribution – not least in making renewable energy cheaper and more reliable, and its rapid adoption easier.”

The pair’s photoluminescence imaging technique has enabled much faster improvements in the quality of solar cells and thereby contributed to further reductions in the cost of solar power, helping to make solar energy the most cost-effective way to generate electricity.

The researchers are jointly based at UNSW’s School of Photovoltaic and Renewable Energy Engineering and at BT Imaging, a company they founded as a spin-off from UNSW.  BT Imaging has sold products based on the pair's technology to almost all leading manufacturers in the solar panel supply chain globally, including the world’s five largest solar cell manufacturers.

“We are the leader in material and device inspection solutions used to design and produce virtually every solar module in the world,” Professor Trupke said.  “As the world recognises that renewable energy has gone from being desirable to critical, photovoltaics is playing a leading role in that global energy revolution, by transforming the way electricity is generated and used. Australia is an established leader in photovoltaics and we’re proud to have done our part – and we’re delighted to receive a Clunies Ross Award.”

This is the third time UNSW researchers have won a Clunies Ross award – all for achievements in the field of solar energy. Professor Martin Green won an award in 1994 and the late Professor Stuart Wenham in 2008.

UNSW Dean of Engineering Professor Mark Hoffman was proud of the University’s track record of pioneering research in solar energy.

“UNSW is the undisputed world leader in renewable energy research and commercialising inventions that directly impact the global energy transition to renewables,” Professor Hoffman said. “Thorsten and Robert’s invention has significantly contributed to our mission to address the challenge of climate change and I congratulate them on being recognised with this extremely respected award.”