"Per aspera ad astra" - Through Hardships to the Stars 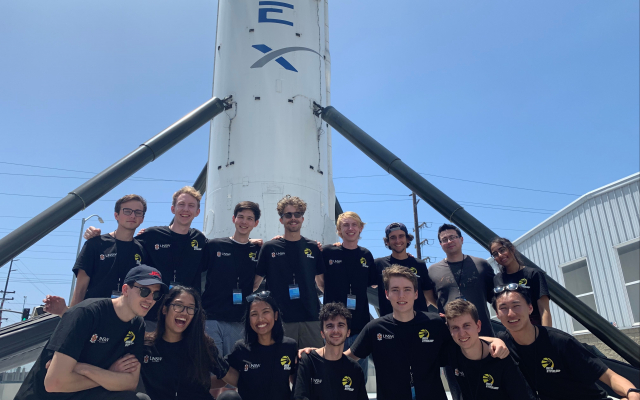 If the Yasmin of 3 years ago could see me now, she’d wonder why she ever thought of dropping out of Aerospace.

I’m sitting here, typing this up while at SpaceX HQ in California. Our team is fresh off a rare tour of the SpaceX factory; watching revolutionary rockets in production. 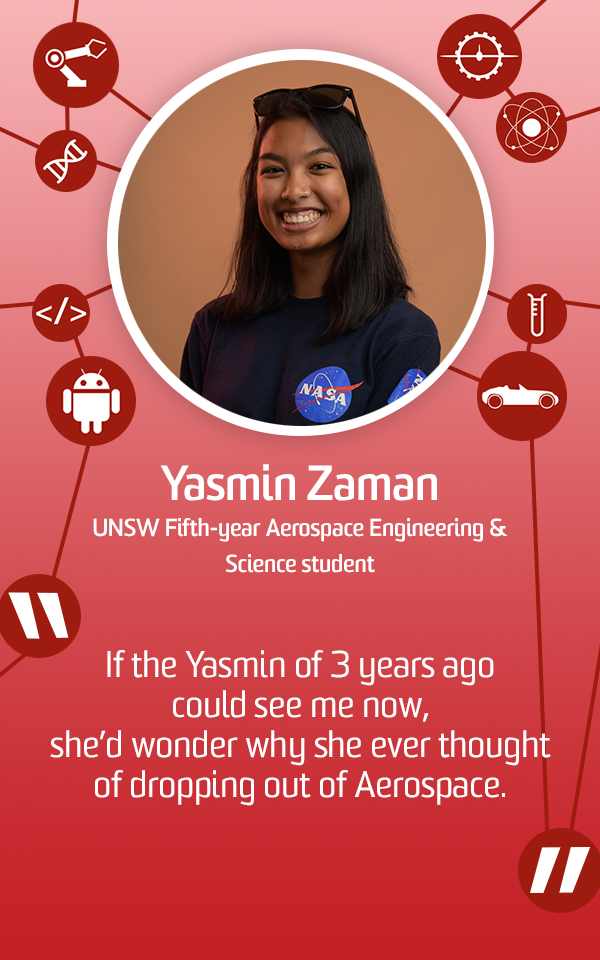 But 3 years ago things were different, I was on the brink of transferring out of Aerospace Engineering & Science. I’ve always wanted to become an astronaut but my first two years of university weren’t the most encouraging. I didn’t pick up content as easy as others and although I tried hard to make things stick, they just didn’t. It could have been the big jump from high school to university or just the turbulent nature of my first year but the more my grades slipped, the more it felt that maybe I wasn’t cut out for it all. With mounting doubts, my passion for engineering was slipping away.

It was only after several afternoons of Googling other potential career paths and finding myself repeatedly unsatisfied that I set myself an ultimatum: I would do everything to make myself love this degree, and if I don’t by the end of this year I will transfer out for good.

My first thought was to explore new environments and meet new people to become inspired in new ways. I stepped out of my comfort zone and applied to become a Marketing Director in EngSoc, then Vice President of Marketing where I led new initiatives, one of which you may have found this blog post through (*hello EngScope readers!*), worked closely with university and industry, and most importantly made an incredible cast of friends. Doing so made me feel strong on my own two feet and began to remind me of the confidence I thought had previously been lost.

On a roll, I also began exploring research. I joined the student project, BLUEsat where I helped with a research paper on the potential of using nitrogen-producing bacteria in space agriculture. The paper was published and the team attended the International Astronautical Congress in Adelaide where I talked about the status of the Australian space industry with Bill Nye, and (tearfully) watched Elon Musk talk about Earth-to-Earth rocket transport & making humanity multi-planetary.

On New Years Eve 2017 I was scrolling through the thousands of photos I took that year for the immensely cliche year in review for Instagram, before I settled on a photo of me in NASA merchandise. I started to type out, reflecting back on the year that was in long form with the highlights and thank yous that were due, but on a whim I changed it to a shorter caption about heading to Mars soon. Just over a year after the lowest of lows I had felt in regards to my future, it felt that everything culminated to this turning point and maybe everything could work out.

Then, in September 2018, UNSW Hyperloop was created. Partially birthed from a group chat (don’t all good ideas start like that?) with the goal to compete in the SpaceX Hyperloop Pod Competition, we set out to create the pod of our dreams for 2020. Through assessments, exam season, semester breaks and internships, we passed all of the preliminary checkpoints - our little team of 8 blitzing through. In early February, I awoke one afternoon from a 3 hour nap to a spam of Discord messages and a screenshot of the congratulatory email from SpaceX saying that we’re one of the finalists for the 2019 iteration of the competition. With that, our team grew to over 20 and our first design built test cycle was put into full drive.

As Structures Lead, I oversaw the design and manufacture of the shell; spending late nights on phone calls halfway across the country from my team to ensure the shape we created was optimal and finding myself covered in foam off cuts and stuck in resin to complete the composite lay-ups. The first time I laid eyes on the finished pod was immensely overwhelming, remembering just how difficult it was to get to this point within the project but also because I may have never made it to this point if I didn’t decide to give aerospace engineering one more go.

Now, I’m sitting in our stall at SpaceX HQ on a huge chest with the carbon fibre shell we spent 3 months fabricating perched on our chassis’ crate behind me, sweating in the dry Californian heat, relieved only by the unlimited supply of cold water & cool coastal breeze.

This 10-month-old team are the only Australian team competing at the SpaceX Hyperloop Pod Competition this year and if you had asked me 3 years ago, I’m not sure I would have believed I would be here. Even now I’m still in complete disbelief, but I’m also more spacefaring than ever. Per aspera ad astra.