Arctic ice loss is worrying, but the giant stirring in the South could be even worse 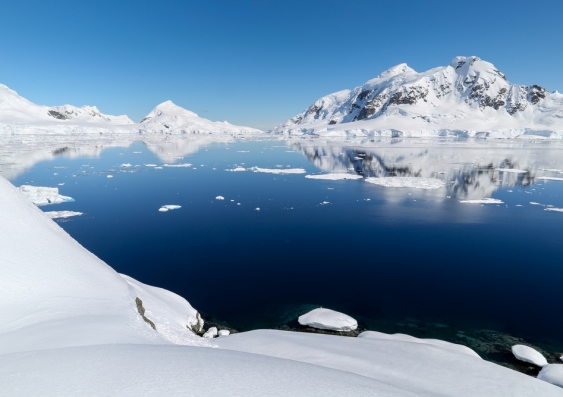 A record start to summer ice melt in Greenland this year has drawn attention to the northern ice sheet. We will have to wait to see if 2019 continues to break ice-melt records, but in the rapidly warming Arctic the long-term trends of ice loss are clear.

But what about at the other icy end of the planet?

Antarctica is an icy giant compared to its northern counterpart. The water frozen in the Greenland ice sheet is equivalent to around 7 metres of potential sea level rise. In the Antarctic ice sheet there are around 58 metres of sea-level rise currently locked away.

Like Greenland, the Antarctic ice sheet is losing ice and contributing to unabated global sea level rise. But there are worrying signs Antarctica is changing faster than expected and in places previously thought to be protected from rapid change.

The threat from beneath

On the Antarctic Peninsula – the most northerly part of the Antarctic continent – air temperatures over the past century have risen faster than any other place in the Southern Hemisphere. Summer melting already happens on the Antarctic Peninsula between 25 and 80 days each year. The number of melt days will rise by at least 50% when global warming hits the soon-to-be-reached 1.5℃ limit set out in the Paris Agreement, with some predictions pointing to as much as a 150% increase in melt days.

But the main threat to the Antarctic ice sheet doesn’t come from above. What threatens to truly transform this vast icy continent lies beneath, where warming ocean waters (and the vast heat carrying capacity of seawater) have the potential to melt ice at an unprecedented rate.

Almost all (around 93%) of the extra heat human activities have caused to accumulate on Earth since the Industrial Revolution lies within the ocean. And a large majority of this has been taken into the depths of the Southern Ocean. It is thought that this effect could delay the start of significant warming over much of Antarctica for a century or more.

However, the Antarctic ice sheet has a weak underbelly. In some places the ice sheet sits on ground that is below sea level. This puts the ice sheet in direct contact with warm ocean waters that are very effective at melting ice and destabilising the ice sheet.

Scientists have long been worried about the potential weakness of ice in West Antarcticabecause of its deep interface with the ocean. This concern was flagged in the first report of the Intergovernmental Panel on Climate Change (IPCC) way back in 1990, although it was also thought that substantial ice loss from Antarctica wouldn’t be seen this century. Since 1992 satellites have been monitoring the status of the Antarctic ice sheet and we now know that not only is ice loss already underway, it is also vanishing at an accelerating rate.

Thwaites Glacier in West Antarctica is currently the focus of a major US-UK research program as there is still a lot we don’t understand about how quickly ice will be lost here in the future. For example, gradual lifting of the bedrock as it responds to the lighter weight of ice (known as rebounding) could reduce contact between the ice sheet and warm ocean water and help to stabilise runaway ice loss.

On the other hand, melt water from the ice sheets is changing the structure and circulation of the Southern Ocean in a way that could bring even warmer water into contact with the base of the ice sheet, further amplifying ice loss.

There are other parts of the Antarctic ice sheet that haven’t had this same intensive research, but which appear to now be stirring. The Totten Glacier, close to Australia’s Casey station, is one area unexpectedly losing ice. There is a very pressing need to understand the vulnerabilities here and in other remote parts of the East Antarctic coast.

The other type of ice

Sea ice forms and floats on the surface of the polar oceans. The decline of Arctic sea ice over the past 40 years is one of the most visible climate change impacts on Earth. But recent years have shown us that the behaviour of Antarctic sea ice is stranger and potentially more volatile.

The extent of sea ice around Antarctica has been gradually increasing for decades. This is contrary to expectations from climate simulations, and has been attributed to changes in the ocean structure and changing winds circling the Antarctic continent.

So far in 2019, sea ice around Antarctica is tracking near or below the lowest levels on record from 40 years of satellite monitoring. In the long-term this trend is expected to continue, but such a dramatic drop over only a few years was not anticipated.

There is still a lot to learn about how quickly Antarctica will respond to climate change. But there are very clear signs that the icy giant is awakening and – via global sea level rise – coming to pay us all a visit.