What are native grasslands, and why do they matter?

The Monaro grasslands are a tiny surviving fraction of the native grasslands that once grew across the Southern Tablelands. 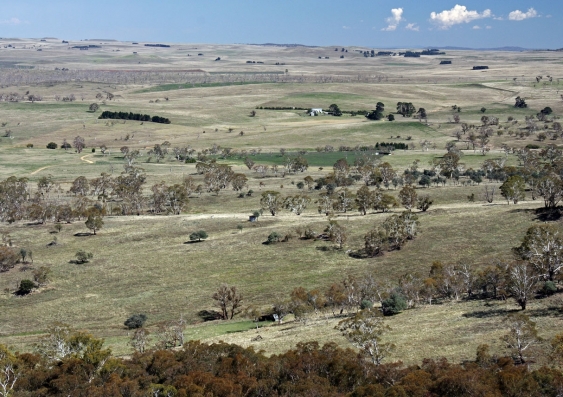 Coalition minister Angus Taylor is under scrutiny for possibly intervening in the clearing of grasslands in the southern highlands of New South Wales. Leaving aside the political dimensions, it’s worth asking: why do these grasslands matter?

The grasslands in much of eastern Australia are the result of forests and woodlands cleared to “improve” the landscape (from a grazier’s point of view) to make it suitable for grazing livestock.

The “improvment” typically entails cutting trees, burning the felled timber and uprooting tree stumps, followed by ploughing, fertilising and sowing introduced grasses that are more palatable to livestock than many native grasses.

However, largely treeless native grasslands once occurred at high elevations across much of the Monaro tableland, in the area stretching between Canberra and Bombala.

The Monaro grasslands (or in scientific speak, the natural temperate grassland of the Southern Tablelands) are in relatively dry and cold areas, particularly in upland valleys or frost hollows where cold air descends at night.

The combination of dry climate and cold restricts tree growth and instead has encouraged grasses and herbs. Native grasses such as kangaroo grass and poa tussock dominate the grasslands, but there are many other unique plants. A typical undisturbed grassland area will support 10-20 species of native grasses and 40 or more non-grass species. 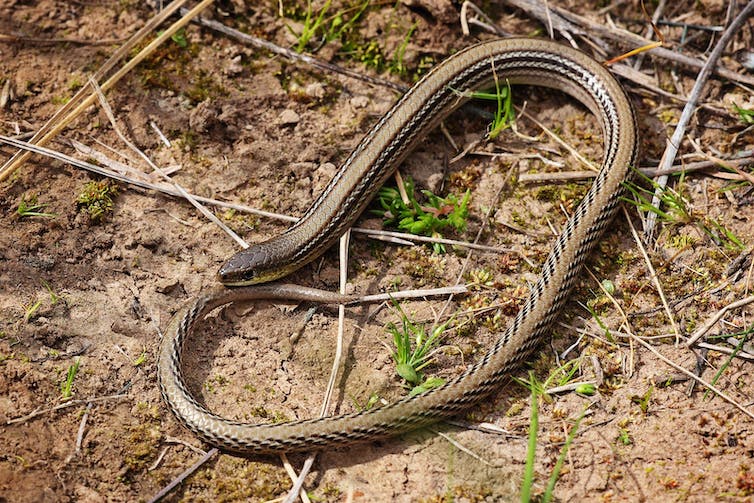 Striped legless lizards may resemble a snake, but most of its body is actually tail. It has vestigial limbs and a non-forked tongue. Benjamint444/Wikipedia, CC BY-NC-SA

It is estimated only 0.5% of the area that would once have been natural temperate grasslands in the Southern Tablelands remains. The rest has been gradually “improved” since the mid-nineteenth century to make them more productive for livestock grazing.

Livestock dramatically change the composition of grasslands, as animals remove palatable plants and compact the soil under their weight. Disturbed soil and the livestock also help to spread non-native weeds.

However, most native grasslands have not just been modified by grazing but completely replaced by man-made pastures. That is, the land has been ploughed, fertilised and the seeds of introduced grasses have been planted.

Because the Natural Temperate Grassland of the Southern Tablelands is now so rare it is classified as critically endangered and federally protected. Furthermore, many of the distinct plants and animals that still live in these grasslands are classified as vulnerable or endangered. 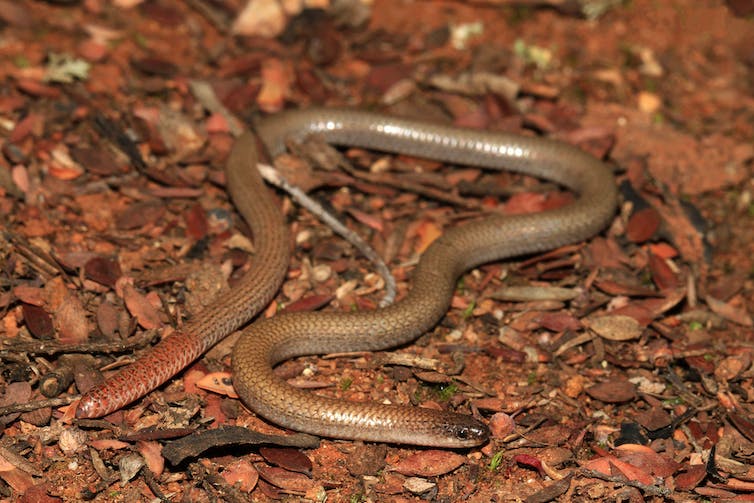 The pink-tailed worm lizard is one of the rare species living in the native grasslands of the Southern Tablelands. Matt Clancy/Wikimedia Commons, CC BY-SA

Some of the best remaining examples of the Monaro grasslands can be found in old cemeteries and in areas set aside as public livestock grazing areas. These areas of public land have often been spared from pasture improvement or only lightly grazed, and thus now support relatively intact native grassland ecosystems.

While, to the untrained eye the Monaro grasslands may seem unremarkable and difficult to distinguish from grazing pastures, they are deeply important. They show us what Australia once looked at, and act as a haven for native biodiversity.

Indeed, what remains of the natural grasslands is now so disturbed by agriculture there is a real threat this distinctive ecological community and many of the species it contains may disappear altogether, if they are not protected from excessive grazing, fertilisers and the plough.