There's precious little business case for nuclear power in Australia, but we could start with the end product -  storing radioactive waste. 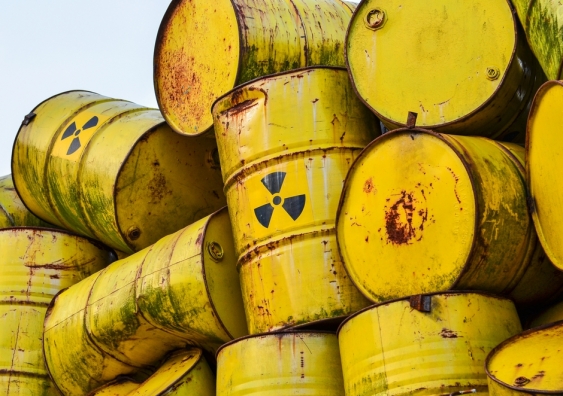 Last year Australia sold more than 7,000 tonnes of uranium, at a value of nearly A$600 million.

This uranium produced nearly as much energy as Australia uses in a year, but with less than 10% of the carbon dioxide from coal-fired power stations.

Geoscience Australia has estimated Australia could mine up to 1.27 million tonnes of uranium at a reasonable cost. At the current export rate this would last for more than 150 years.

The question of whether Australia could be using all this uranium more efficiently – as a low-carbon and reliable alternative domestic power source – will no doubt be discussed in an inquiry set up by federal energy minister Angus Taylor last week.

Travel down this road again

The parliament’s environment and energy committee will consider the economic, environmental and security repercussions of nuclear power in Australia. The committee’s advice is expected before Christmas.

The inquiry will build on a 2006 report on nuclear power initiated by Prime Minister John Howard and the suggestions from a 2016 royal commission in South Australia on the nuclear fuel cycle.

While we wait for the committee’s report, past investigations and what we know about the nuclear industry leads us convincingly to two basic conclusions: enriching uranium in Australia is not economically feasible, but storing nuclear waste is.

Unlike coal, which can be used in a power station without much processing, nuclear reactors cannot simply be fuelled with uranium ore.

The nuclear fuel cycle begins when mined uranium ore is converted to yellowcake, which contains about 90% uranium oxides.

This is the only step of the nuclear fuel cycle that already exists in Australia. It is profitable, but expanding exports is unlikely. International demand and uranium prices are flat due to the decommissioning of old European power stations and only modest growth in Asia.

While this may change over the next two or three decades, at the moment the commercial opportunities for selling more uranium do not exist.

Enriching uranium in Australia is not an option

After being sold overseas, Australian yellowcake is converted to uranium hexafluoride in one of a few global facilities. Next is enrichment, when the crucial fissile isotope U-235 is increased from a natural concentration of 0.7% to an artificial 3-4%. Finally, the enriched uranium is incorporated into zirconium alloy fuel elements.

This processing often happens in multiple countries. Australian uranium may, for example, be bought by a Japanese power company, shipped to Canada for conversion, be enriched in France, and then incorporated in fuel elements for a reactor in Japan. To prevent Australian uranium ending up in nuclear weapons, the Department of Foreign Affairs and Trade has complex safeguards to keep track of it all.

The South Australian royal commission considered the possibility of enriching uranium in Australia, which would in principle vastly increase its value.

But the commission found that while Australia could easily build the technical capacity, the global market is already oversupplied. There is currently no commercial market for more enriched uranium, and it’s unlikely to grow significantly.

Every part of the nuclear fuel cycle, apart from mining ore and turning it into yellowcake, takes place overseas. Nuclear power in Australia would effectively be an import business.

This can be expected to considerably add to costs that are not at all balanced by Australia’s natural abundance of uranium ore. Compared with countries such as France or the UK, which have established nuclear industries and pre-processing facilities, operating nuclear reactors in Australia would at least initially be much more expensive.

The main argument for nuclear power in Australia is therefore that it can provide low-carbon power with little changes required to the existing distribution network of poles and wires.

In contrast, renewables such as wind and solar require significant upgrades to this network – including massive infrastructure projects like Snowy 2.0 – and a stronger focus on demand management.

The considerable improvement of renewable technologies in recent years has brought the cost down to levels competitive with coal and nuclear. However the infrastructure costs of replacing coal-generated electricity with renewables could be huge. These costs may possibly exceed those of building nuclear power stations.

While nuclear power in Australia has a somewhat shaky business case, a much stronger argument can be made for the back end of the nuclear fuel cycle: storing nuclear waste.

Australia’s incredibly stable geology offers the opportunity to build a radioactive waste disposal facility similar to the repository under construction in Onkalo in Finland.

Pursuing this option would complement Australia’s uranium exports, as nuclear fuel would be taken back once exhausted. Such a repository would in fact give a new marketing edge to the successful yellowcake business.

It also addresses Australia’s responsibility for any environmental consequences of sending uranium into the world. Importantly, supplying the world’s carbon-free nuclear reactors and managing their waste responsibly could be an important plank in Australia’s efforts to reduce carbon emissions.

It would not be surprising if the current inquiry in federal parliament suggests a radioactive waste repository is the necessary condition for contemplating any domestic nuclear electricity generation.

The successful and profitable operation of such a disposal facility in Australia might provide the strong argument for building nuclear power reactors that is presently lacking.