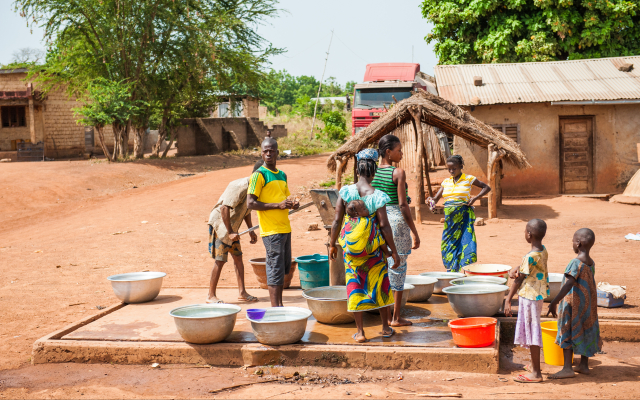 Groundwater – a vital source of water for drinking and irrigation across sub-Saharan Africa – is resilient to climate variability and change, according to a new study.

A consortium of 32 scientists from across Africa and beyond carried out the research, published in Nature, which shows how groundwater replenishment depends upon heavy rainfalls and flood events, amplified by climate change.

The findings are significant given the fact that 1 in 3 people currently lack access to safe water in Sub-Saharan Africa and a dramatic expansion of irrigation is required to feed growing populations.

Groundwater plays a central role in sustaining water supplies and livelihoods in sub-Saharan Africa due to its widespread availability, generally high quality, and intrinsic ability to buffer episodes of drought and increasing climate variability.

Dr Mark Cuthbert from Cardiff University, who is a visiting fellow at UNSW and co-lead on the study, said: “Previous regional-level assessments of groundwater resources using large-scale models have ignored the contribution of leaking streams and ponds to groundwater supplies, underestimating its renewability in drylands and resilience to climate change.”

“Knowledge of the replenishment process can inform strategies to enhance groundwater supplies. In drylands, where groundwater resources are often the only lasting source of freshwater, such strategies can further exploit the predictability of heavy rainfalls and flood events that generate groundwater,” added Dr Cuthbert.

“Our study reveals, for the first time, how climate plays a dominant role in controlling the process by which groundwater is restocked. This improved understanding is critical for producing reliable climate change impact projections and adaptation strategies.”

The research involved the collation of multi-decadal records of groundwater levels and rainfall to examine how the replenishment of groundwater has responded to variations in climate and geology. The team analysed observations compiled from nine countries across sub-Saharan Africa representing a range of climates from hyper-arid to humid.

The study shows that in humid areas groundwater is replenished primarily by rainfall that directly infiltrates the land surface, whereas in drylands it occurs predominantly by leakage from temporary streams and ponds. Local geology also plays a role in determining the sensitivity of rates of replenishment to changes in climate.

Associate Professor Martin Andersen from the Connected Waters Initiative at UNSW, Sydney who is not an author of the paper, appraises the importance of the work.

“The findings by Dr Cuthbert and co-workers illuminates a generally overlooked aspect of the hydrologic cycle: that of groundwater recharge from dryland streams and rivers,” he said.

“While the interaction between streams and aquifers has been known for several decades and assumed to be important, it is rarely quantified systematically as in this case for sub-Saharan Africa. Their findings are very relevant for other dryland regions around the world, such as large parts of Australia. However, the results may not be directly transferable as it is crucial to understand and quantify the groundwater recharge from streams in the context of the local geology and local climate,” he continues.

“Therefore, much work is still needed to investigate and quantify local conditions for sustainable use of groundwater in dryland catchments across the globe. The work by Dr Cuthbert and co-workers shows the way.”

This research, supported by UK research councils (NERC, ESRC, EPSRC), the Department for International Development (DFID) and The Royal Society, also shows that, in drylands, the heavy rainfalls and flood events generating groundwater replenishment are commonly associated with climate variation phenomena such as El Niño and La Niña.